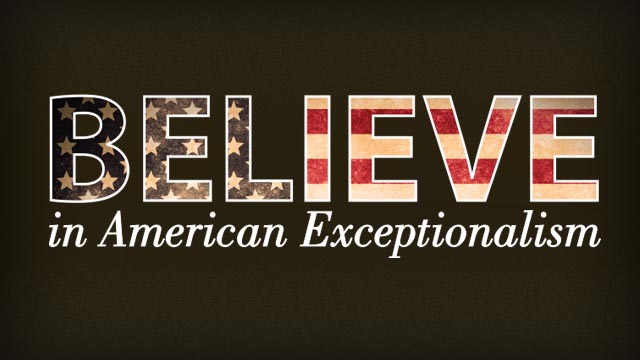 RUSH: Now, I mentioned that there’s a journalist, a Millennial journalist of some repute out there who tweeted something that once again, folks, it just… It demonstrates… You know, I’m really struggling here not to take all this stuff too seriously today.  I really don’t like being a Debbie Downer kind of person.  I’m really struggling to avoid it.  My problem in all of this is that I just… I love this country so much, and I have such high hopes for people who are not yet born.  This country means everything to the world.  It means everything to freedom and liberty and prosperity.

We in America don’t often stop, if ever, to think about this because we’ve never experienced anything other than America.  But the history of humanity is primarily a history of poverty, as opposed to prosperity.  It’s a history of tyranny, dictatorships, suffering, bondage.  I’m not making this up.  I mean, that is the way in which most people who have lived on earth since the beginning of time have not experienced the life we as Americans take for granted.

We’re the only country that has a charter indicating and enshrining that the very existence of citizens and human beings is in a state of God-created freedom.  That charter, that Constitution was written by brilliant people whose primary objective was to keep it that way.  They sought to keep it that way — the focus on individual liberty and prosperity and freedom, pursuit of happiness — by limiting the role of government in day-to-day existence.

Most of the people in the world have never gotten close to being able to live under such circumstances.  In virtually all other countries in the world, the governments are the focus, and everything revolves around government.  Now, we’re trending that way. Don’t… I’m talking about our founding, and this is what’s so crucial is to maintain that. Our founding’s under attack, our existence as a free nation is under attack, most seriously from internal forces now.

The only thing that saves us, the only thing that has saved us over generations is education, a proper education of the Constitution, of our founding, of our country.  Why.  Why it was founded the way it is. How did the United States come to be? What did it take for the United States to come to be?  None of that’s taught anymore.  Instead, America is taught as inherently racist and unjust and immoral.  You know the drill.

I don’t know how many generations that we have now, but it’s a minimum of two and probably more, who have grown up not having the foggiest idea of the greatness of America.  You know when Trump did his State of the Union Address Tuesday night and he singled out the World War 2 heroes? How many young people do you think had the slightest idea what he was talking about when he talked about storming the beaches of Normandy and the concentration camps?  Look.  It’s a long time ago.  And for people our age, you and me, we were taught this growing up.

Our parents did all that — and kids today, their parents didn’t.  And if they’re not taught it, if there’s no reverence for it, they’re not gonna ever know it. And, as such, they’re not gonna have any respect for it.  And the same thing about Constitution, the origins of the country and what it took to become the United States.  How did it happen?  Okay, we declare independence from a tyrannical king in the United Kingdom, Great Britain, and we fought the Revolutionary War, and then we had the Civil War. Do people really know what it took?

Do they really know what was sacrificed by the people that built this country, who designed it?  They don’t.  Not enough do.  As such, there isn’t any reverence for it — and when you replace the reverence with the idea that the nation was founded in sin and injustice, well, then everything becomes threatening.  I worry about it.  I worry that this country can only survive as long as the people who live in it understand what it is and have almost a reverently appreciation for it, because it is so unique.

It hadn’t been done before. It’s never been done.  It was never even tried before.  The closest you could say that anybody even tried would be the 1500s with Magna Carta but that was basically just a charter that was not significantly implemented on a widespread basis, but it had the same principles as the Constitution.  Now all that’s out the window and it’s been replaced by an education, indoctrination — whatever you want to call it — that’s just sickening.

And this is why I take all this very seriously.  It’s such a God-given opportunity to be an American.  It’s such a once-in-a-lifetime opportunity to be taken advantage of, to be maximized.  It’s worth protecting, it’s worth fighting for, and it’s always been under assault. Since the founding, it’s been under assault.  You stop and think, this always… I mentioned this a bunch of times, and it just… It still mesmerizes me.

It’s a piece of paper that for over 250 years has been respected simply because it exists. It would have been the easiest thing in the world to throw it away and to try to turn this country into something it was not founded to be, and some presidents have made half-baked efforts at doing so. But never full-fledged. The fact that we have survived this long is a miracle to me, given humane nature and given the history of the world.

Something as simple as “I don’t want to move.” Okay, if you don’t want to move, then maybe you’re limiting your chances. But that’s up to you. Well, slowly and surely we’re creeping into this same set of circumstance where people live in daily fear of, quote, unquote, “the authorities.” And they live in fear or are being shamed by the woke segment of society, political correctness running amok.

I have a grave concern and I think it’s all due to the fact that our education system has been corrupted and great damage has been done to it on purpose so that there is as we grow and get older less and less and less understanding and appreciation for the true uniqueness and greatness of America. Because if that hadn’t happened then all these other internal, external threats would not pose nearly as big a consequence or set of consequences as they do.

If we had proper education, just basics, the Green New Deal would be laughed out of existence by virtually everybody who was exposed to it. Instead, the Associated Press is trying to treat it as reasonable and sensible and is out trying to sell it, and in doing so, they’re lying about what it is. 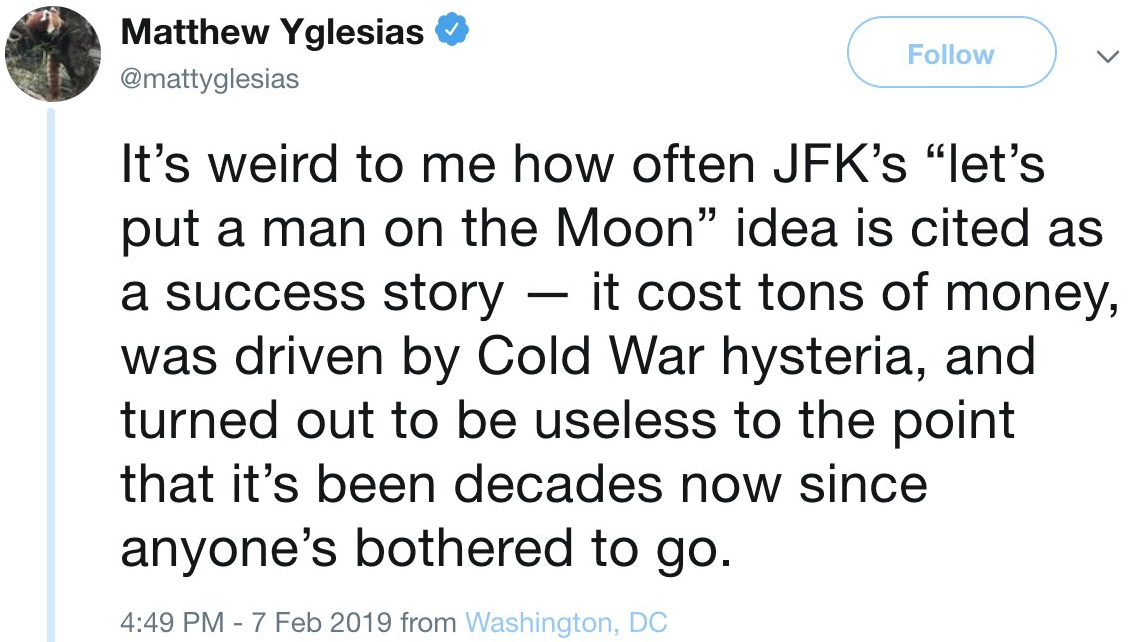 The lack of education extends to way too many places. This journalist, his name is Matthew Iglesias. And I don’t know where he writes. If it’s Vox or one of these Millennial places, Slate. I’m not sure which. But here’s the tweet. “It’s weird to me how often JFK’s ‘let’s put a man on the Moon’ idea is cited as a success story — it cost tons of money, was driven by Cold War hysteria, and turned out to be useless to the point that it’s been decades now since anyone’s bothered to go.”

Do you realize how ignorant that is from beginning to end? And I’m being charitable calling it ignorant. “Let’s put in a man on the Moon cited as a success story, it costs tons of money, driven by Cold War hysteria.” He’s referring to the fact that the Russians, the Soviets put a satellite up there called Sputnik, and that made us all paranoid. We were afraid that we were gonna be annihilated by a nuclear bomb launched from space, so we had to get up to speed in the space game to keep up with the dastardly Soviets, who people like Mr. Iglesias thought were harmless. “And turned out to be useless to the point that it’s been decades now since anyone’s bothered to go.”

Now, he can only think this if he has had absolutely no proper education about that era. I remember when I was a teenager, a man named Shorty Powers of NASA came to Cape Girardeau. They were in the process of selling everybody on the space program. NASA was doing nationwide PR. Somebody in our little town had enough pull to get somebody from NASA to come in and do a speech, a presentation.

And my father was fascinated with space. He was a pilot, so he took me to this thing. And one of the aspects of Mr. Powers’ presentation was all of the technology that was created out of necessity for the space program to put a man on the Moon, to keep human beings alive in little bitty capsules in outer space, the things that were necessary to invent to make that possible had ramifications throughout everyday American society that led to the enhancement of our quality of life, that led to the opportunity for prosperity.

Because it didn’t just stick in the space program. The things that were necessary to be invented to keep human beings alive in a vacuum and to be able to launch them into space and fly them at speeds of 25,000 miles an hour, the things learned, the things developed and invented to be able to do that ended up having everyday application in America to the point that the list is so long, you can’t mention them all.

Now, yeah, they would have probably happened immediately, but to say that the space program was a waste of money because it was simply a Cold War paranoia is ridiculous. How about the invention of the CAT scanner, computer microchips, cordless tools, freeze-dried food, including Tang, insulation, memory foam, satellite broadcasting, interstellar communications, scratch resistant glass and lenses, smoke detectors, water filtration.

The list is endless. Things that the space program had to invent to sustain life that found their way into everyday life in America and eventually found their way into everyday life as cheap as needed for as many people to be able to — The idea that the Moon program, the space program has been a total waste of money and a bust could only be stated by somebody who’s not been taught the true meaning and the true value of such pioneering experimentation. Somebody who’s been taught what a waste of money it was to oppose communism. That’s the root of this. We had no business opposing the Soviets. The communists weren’t a threat. That’s what today’s liberals think, and that’s what yesterday’s thought.