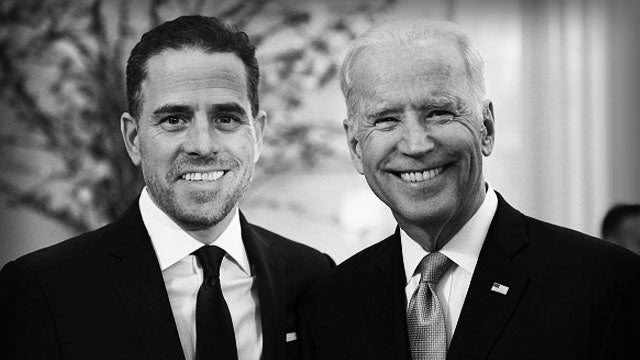 Let’s see what’s next in The Stack here. “Media Big Tech Cover-Up Collapses with Hunter Biden Investigation.” That’s a Breitbart story. And what’s underneath that? A continuation. It’s a list of all the media outlets which participated in the cover-up, which are now reporting on the story. So what happened? Why all of a sudden is the mainstream media, the legacy media, the Drive-By Media, where are they all of a sudden, how did they just now all of a sudden discover the Hunter Biden story when they actively sought to bury it. They buried every aspect of it before the election. Well, let’s go to back to me on this program, November 18th, after the election, nevertheless, this is what I said. 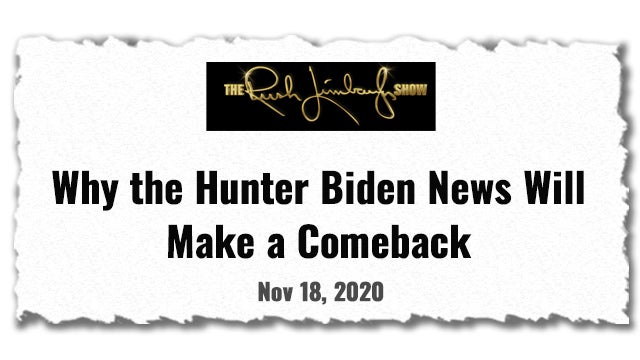 RUSH ARCHIVE: You think the Democrats are gonna wait however many years for Joe Biden to see, “You know what? I don’t want to do this anymore”? They’re not gonna wait. That’s why the Hunter Biden news is starting to flow freely now. There’s gonna be all of a sudden a newfound reason to look into Joe Biden and Hunter and the ChiComs, ’cause they want Kamala in there tomorrow.

RUSH: Yes, my friends. I predicted it back on November 18th. Now, it may not have taken a whole lot of brain power to predict this, but you know as well as I do that Joe Biden is not gonna serve the first year of his first term. You know it, I know it. He was never intended to. He is a placeholder from the get-go.

What they want — and by the way, the “they” is Barack Obama, because it’s Barack Obama that’s totally running the Democrat Party’s political operation right now. And make no mistake, Barack Obama has been running it since he left office in 2017. Barack Obama ran the Russia hoax, ran the coup, ran the unimpeachable Ukraine phone call. He ran it all. 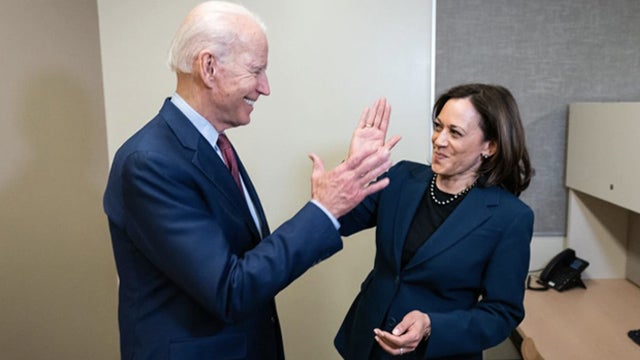 Now, you might be saying, she’s a nobody. She couldn’t win even in their own pry. That’s exactly right. Why didn’t she get a single vote in the Democrat primary? Because she is so radical left, she is so far left, and she was just not that good a campaigner. She had too many flip-flops on issues because she couldn’t be as honest and forthright about what she really believes, but she did get close enough to it.

BIDEN: There are 50 former national intelligence folks who said that what he’s accusing me of is a Russian plant. They have said that this is — has all the — four — five former heads of the CIA, both parties, saying what he’s saying is a bunch of garbage. Nobody believes it except his and his good friend Rudy Giuliani.

RUSH: Right. How many times have Trump and Rudy been right about these people? I mean, the length of the list is — you can’t see it. They have been right every time they have talked about Biden and what the purpose of his campaign is and who’s running it and so forth. Now, let’s go to back to October 22, 23, 2020. We have a montage. When Trump brought up Hunter Biden and the story at the debate, the Drive-Bys claimed there was no evidence for it.

ABBY PHILLIP: You need an encyclopedia to understand what is going on. Perhaps if you’ve been studying The Daily Caller, or whatever it is.

CHUCK TODD: If you didn’t follow it closely, you probably don’t quite understand what the hit is.

GEORGE STEPHANOPOULOS: Most of those charges, unverified.

JAKE TAPPER: Charges so heinous I’m not even going to say them. Just nonsense with no evidence. Just completely made up.

JOY REID: If you’re not immersed in right wing media.

NICOLLE WALLACE: And we are cable hosts.

JOY REID: (laughter starts) And we don’t know the details.

NICOLLE WALLACE: They’re like, “What are they talking about? I don’t know. (crosstalk) Some laptop.”

RUSH: Folks, do you realize what you just heard here, this is back on October 22nd, 23rd, where they’re denying everything about the Hunter Biden story. And it was Jake Tapper here saying, “Charges so heinous I’m not even gonna say them.” George Stephanopoulos, “Most of this is just nonsense with no evidence, just made up.” And yet here they are today basically regurgitating the same things they denounced a month and a half ago. 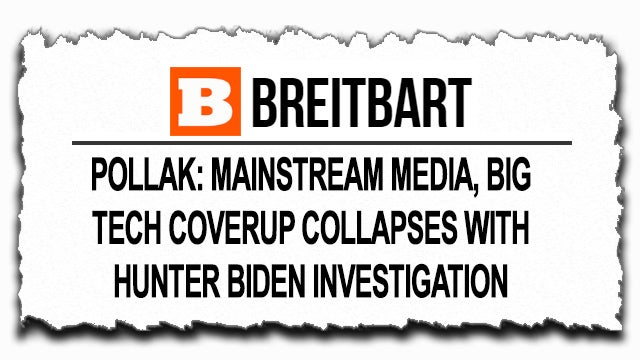 From the Breitbart News agency: “Mainstream Media, Big Tech Coverup Collapses with Hunter Biden Investigation.” So here is a list of media entities which denied the Hunter Biden store and made fun of the New York Post and made fun of anybody who thought there was anything to it. Facebook, Twitter, the Washington Post, Wikipedia, CBS, MSNBC, the New York Times, Politico, Axios, CNN, National Public Radio, ABC News, NBC News. Every one of these news entities denied the Hunter Biden story. They denied it, and they said anybody making these allegations is reprehensible. There’s no evidence for any of this.

Now on December the 10th, essentially five weeks after the election, every one of these news organizations is now running the Hunter Biden story that they denounced, that they mocked, that they made fun of, that they accused anybody of believing the Hunter Biden story of being insane. This is just amazing. A great illustration of how the media is operatives. They’re not media anymore. This is a great illustration of how there isn’t any news anymore. They covered up for Hunter Biden. They made fun of anybody who was trying to call attention to it. Mission accomplished. They got it buried.

You remember the polling data? There was something like 9% of the American voting public admitted that had they known about the Hunter Biden story, it would have changed their vote for Joe Biden. So mission accomplished. They hid the story, they buried it, they made fun of anybody who believed it, but now they’re all out there promoting the very same story. Why? Because we’re getting close. The setup has begun. The setup of Joe Biden. The process by which they’re going to get rid of him, force him to resign, what have you, has begun.

RUSH: I don’t want there to be any confusion about this Hunter Biden thing, because there already is. Now, I want to share with you the way Joel Pollak writes the story at Breitbart. Here’s the headline: “Mainstream Media, Big Tech Coverup Collapses with Hunter Biden Investigation.” 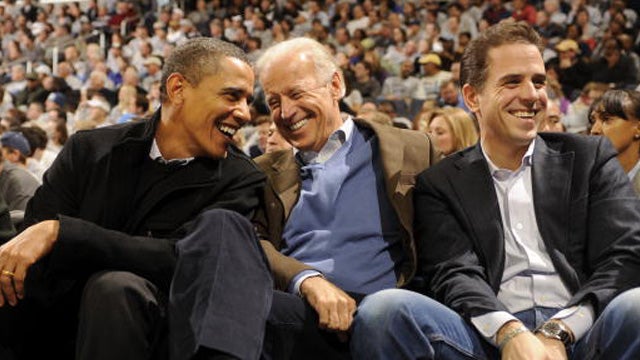 So here we go five weeks after the election. “The revelation Wednesday that Hunter Biden is under investigation for tax violations relating to his foreign business affairs confirms that the media/Big Tech censorship of stories during the election about his laptop and emails was entirely without merit.” If you look at it that way, yeah, that’s what it means.

They’re just getting away with the idea that now all of a sudden, now they’ve been told there’s a tax investigation. Why, maybe the Hunter stuff is true. They purposefully covered it up. They purposefully deflected people’s attention away from it. I’ll never believe that the media was clueless about this. The exact opposite.

RUSH: You know, one more thing because I’m out of time and I have to go pretty quickly, but I want to ask a question about this Hunter Biden stuff. Who is leaking it? Who is leaking from the bureaucracy of the DOJ all these stories about Hunter Biden, but only after the election? Who’s doing this? We know who the beneficiary is. Kommie Harris. I think we’re gonna see Biden start bleeding, politically bleeding. I think he’s gonna bleed out from these thousands of cuts from now on. I think this signifies that the move to edge Biden out has already begun. You mark my words.