Okay, well, “According to a Washington Post/University of Maryland poll published this week, most Americans agree that it’s necessary to wear a mask, stay at home when possible, avoid gatherings and keep six feet away from others in public. … Americans are mostly on the same page about current social distancing measures.” But, “According to a CNN poll released this week, nearly three-quarters of Democrats said the worst of the crisis is still ahead of us, while only about a quarter of Republicans said the same. This marked a 15 percentage-point drop among Democrats since CNN last asked the question in April, and a 44-point drop among Republicans.”

So the bottom line here is a vast majority of Republicans think the worst is behind us. A vast majority of Democrats think the worst is ahead of us. So now we dig deep and ask ourselves why. Is it as simple as the left and the Democrats are comprised of majority pessimists, or is it because they believe the absolute drivel and bilge that their media feeds them every day? Because if they do, that would explain the pessimism.

Because I am here to tell you the American mainstream media is portraying the future as potentially the end of the country. I think liberal Democrats are naturally pessimistic. In fact, I think, as you know, I’ve said countless times I think pessimism is easy for almost every human being. Being positive and optimistic takes a little work. But pessimism is natural, to think something’s not gonna work, something’s gonna fail, something’s gonna bomb out on you. It doesn’t take any work. You don’t need books in the library on how to fail. We all know how to do it. Books on how to succeed oftentimes make millionaires out of their authors.

Trump is obviously an optimist. He thinks the worst is behind us. And he thinks if there’s a second wave that we now have enough of a database of knowledge and medical equipment to be able to deal with it much better than the initial outbreak.

Now, have you also noticed — maybe I’m alone in this — but as the number of cases is declining — and, by the way, I was really happy that Vice President Pence today made mention of this latest phenomena. I didn’t know it was in more places than Georgia. In Georgia right now, as testing is increasing, the number of cases is staying flat or dropping. Folks, that is a phenomena. That is phenomenal because normally more testing would expose more people who have become infected.

We’ve now reached the phase where more testing is not revealing more infections. So the mortality rate is plummeting. Meaning the death rate. And the number of people who are actually getting symptoms is plummeting. And the vice president said that it’s happening in a lot of places, not just in Georgia. So while this is happening, have you noticed that despite that, more and more people are starting to wear masks? Government people, scientists, doctors, the white lab coat crowd. So why would this be?

I have a story here PJ Media: “Neurosurgeon Says Face Masks Pose Serious Risk to Healthy People.” Again, this story is written by Megan Fox. I think this Megan Fox babe does nothing but write stories for PJ Media. It seem like I quote from her four times a day. Which is fine. Don’t misunderstand.

“Every Karen on Facebook is shaming her neighbors for not wearing a face mask.” You’ve heard about this, right? Snitches, a bunch of blue state governors are actually asking citizens to snitch on people not wearing masks, not practicing social distancing, hanging around closer to six feet to people, going places they shouldn’t go, and these people have names, nicknames. They’re called Karens. And they are deploying on Facebook. They’re snitching on people, identifying them on Facebook. 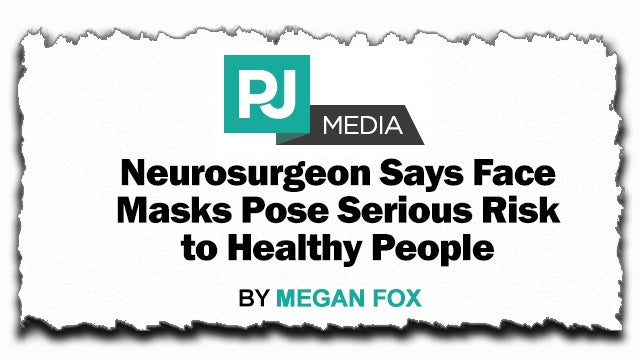 And so she writes here, every one of these snitches, every Karen on Facebook is shaming her neighbors for not wearing a face mask. “We are being told by governors that if we don’t wear them we are selfish, horrible human beings with no souls who want Grandma to die a horrible death. Police are tackling people who don’t wear them properly in the subway. Grocery stores are throwing maskless people out and denying them service. But now, there’s another doctor weighing in–besides Dr. Fauci, bonafide sex god and ruler of us all -” Now, you may not understand her reference there to bonafide sex god, but it’s because some idiot female journalist at Vanity Fair or New Yorker, whatever, proclaimed Fauci the sexiest man alive not that long ago. So that’s her snide reference to Dr. Fauci as a bonafide sex god.

Dr. Fauci, by the way, “who also said face masks are largely security theater and of no use to the healthy. Dr. Russell Blaylock, a neurosurgeon, has written an editorial addressing healthy people wearing masks to protect themselves from COVID-19 and his advice is: don’t.” If you’re healthy, do not wear the mask. “First, Blaylock says, there is no scientific evidence that it is effective against COVID-19 transmission. Pro-science people should care about this.”

Now, you realize how many people gonna be floored and stunned by that? Hell, folks, yI needed some dental surgery done a couple weeks ago. Could not enter, do any without wearing a mask, everybody in there was wearing a mask and you start telling people that healthy people don’t need it, that it’s not gonna protect you from COVID-19, you’re gonna upset a whole bunch of applecarts.

But Dr. Blalock is suggesting that it isn’t necessary. Dr. Fauci has called it security theater, and yet, as the number of cases is flattening now, here come all these people increasing the wearing of masks in the health community. It’s almost as though they don’t want you to get the message that the news on the virus might be improving.