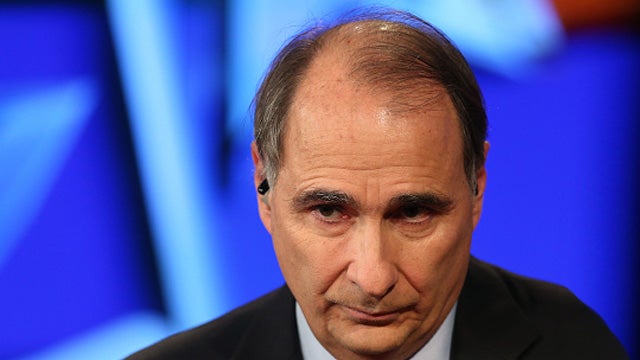 RUSH: David Axelrod, who was part of the coup from the Obama administration and Biden, part of the coup that operated for four years and still is, in my estimation, trying to get rid of the president, tweeted — and I referenced this mere moments ago: “If the president is taking a steroid –” this is dexamethasone “– that sometimes produces wild mood swings, shouldn’t he surrender authority to the vice president under the 25th Amendment?”

See how this all works? This is all done in coordination with the media. I just watched a little bit of CNN during the top-of-the-hour break, and they got Jim Acosta. And you would think there might be just a twinge of compassion for Kayleigh McEnany. You might think. But you would be deadly wrong. There’s nothing but long-knive hatred.

And then he went on to describe how the communications office in the West Wing is deserted because everybody in there has been sent home because they’ve either got it or they don’t want ’em to get it. Meaning COVID-19. I mean, the hatred and the viciousness. You know what I don’t understand, folks? I really don’t understand this. And I don’t think I ever will understand.

I do not understand how the undisguised sheer mean-spiritedness of the mainstream media the past four years is not seen for what it is by average, ordinary Americans who consume that crap — i.e., watch it or read it. I’ll never understand this. You know, my entire career for 32 years plus, I’ve been told, “You gotta be real careful, Rush, you gotta very careful how you say things. You don’t want people to hate you. You don’t want people to misunderstand.”

Apparently, being hated is something very easy for us conservatives to do, and we have to make sure, we have to go the extra mile to make sure that what we do is not seen as bigotry and hatred and racism and homophobia and anti-women, anti-black. But yet these people can amplify, they can brag about, they can exude full-fledged hatred as the normal order of their day, and nobody calls them on it, nobody describes it that way.

It is extremely frustrating. I’m sure you’d have to agree. These people never get called on it. I never run into anybody who watches the Drive-By Media who ever concludes, “Man, these people are filled with hatred.” Now, I see the polls and I see the stories that they’re the least respected business on earth. I see that. But people still watch it even though they say they don’t. Unmistakable hatred. 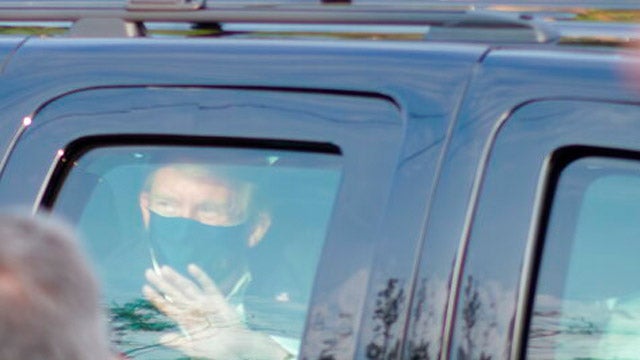 And it isn’t just for Trump. It’s for all of us. The hatred for you. The hatred for me. You are deplorables. I am who I am. Sean Hannity is who he is. All of us conservatives are to one extent or another hatemongers. We’re racists. We’re bigots. We are none of the sort. They are. They are the exact same things they accuse us of being. They put it on display, and they don’t even hide it. But the abject hatred that these people exhibit and engage in in the normal course of their jobs, how it is not seen, how the people that watch CNN — maybe they do. I don’t know, maybe this is why CNN’s ratings are as low as they are. I don’t know.

Even if people see them that way, CNN doesn’t care. They’re not altering or changing the way they go about the way they do business. In fact, it’s getting worse. But to me — and I know this is so unrealistic, but I’m gonna say it anyway. To me, if you watch the mainstream media and you watch all of the undisguised hatred for Donald Trump — and it’s not just the reporters. It’s every guest they get, every person they get to talk about Donald Trump or his administration or his accomplishments. It’s nothing but raw hatred. It just amazes me that it does not convince more people to support him or to oppose what CNN supposedly stands for.

Like back to Axelrod. “If the president is taking a steroid” — this back to dexamethasone here — “If the president’s taking a steroid that sometimes produces wild mood swings, shouldn’t he surrender authority to the vice president under the 25th Amendment?” Mr. Axelrod, could we get a list of the medications your client’s taking, Joe Biden? Could we get a list of meds this guy is on? He’s suffering from a stage or two of dementia. But we’re not told what meds he’s taking. They put another lid on the campaign at nine or so this morning. So Biden is nowhere to be seen. There is no contact with Biden.

Do you realize that Donald Trump, with the COVID virus, is more active and more engaging with the American people than Joe Biden is, who does not have the COVID virus. Now, stop and think of that. (interruption) Oh, no, no. I’m dead serious. For my whole career I’ve been told, “You gotta watch it, Rush. You gotta be very careful. You cannot make people think you hate. ‘Cause you already got two strikes against you. You’re a conservative.”

And I never do. I don’t hate anybody or anything, and I’ve never, never portrayed it. And yet I come in here every day with two strikes against me. The Drive-By Media and the left says that’s my normal state. Whereas it is theirs. And they are not called out on it. They don’t seem to be harmed by it. (interruption) Yeah, you might say it’s the epitome of unfairness, yeah, but, you know, I’m the guy that says there’s no such thing as fairness anyway. So to fall back on that is I think a waste. People do react to fairness. I mean, depending on who’s talking about it, you can make some political hay with it, but doesn’t seem like we can. 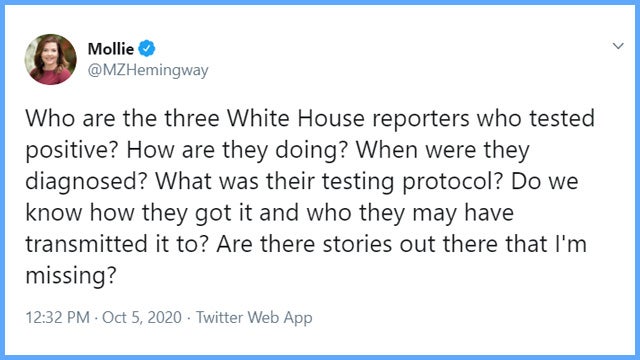 Mollie Hemingway has tweeted: “Who are the three White House reporters who tested positive?” Last week it was reported three White House reporters tested positive for COVID-19. Since then, there has been no information on this. Who are they? “How are they doing? When were they diagnosed? What was their testing protocol? Do we know how they got it and who they may have transmitted it to? Are there stories out there that I’m missing?”

She’s raising an excellent point here. You got three White House reporters that came down with COVID-19, and you can’t find another word about it. You can’t find people they’ve infected. You can’t find out whether they were wearing masks or not. No. But every one of these damn Trump people, every aspect of their behavior has come under the microscope and has been reported, including this abject lie that dexamethasone causes wild mood swings.

Medicines react differently in everybody. I’m not a doctor. I don’t pretend to be a doctor. I have taken dexamethasone. It’s not resulted in mood swings. It was not given to me for COVID-19 reasons. It was given to me to counteract chemo side effects. And I can’t even tell you whether it worked or not. Because I had no actual awareness of any significant change.

So when I hear that it can cause massive mood swings, well, hell, have you ever looked at your average over-the-counter drug, looked at all the potential things that can go wrong, including that this could kill you? There isn’t a drug out there that doesn’t cause potentially bad side effects. But the ones the president is on, oh, my God, these could cause him to have to transfer power under the 25th Amendment. (interruption) Yeah, I know. I keep waiting for there to be some payback for the media and the Democrats for the attitudes, for the things they have done, you know, the price that they should be paying for the lying, the deceit.

They ran that four-year coup. They refused to accept the election results. They spied on Trump. They denied him civil rights and human rights, did everything they could to get him thrown out of office, phony impeachments. If anybody ever deserved comeuppance, if anybody ever deserved a providential strike from on high, it’s these people. Man, are they owed big time. But I’d settle for people just abandoning them. I would settle for their audiences telling them to go to hell.

RUSH: Say, I have been told I — and I think it’s pretty much accurate — I’ve been told that menopause, PMS, can cause drastic mood swings. Right? So, if that’s the case, maybe we shouldn’t have any women presidents, say, under the age of 60.

Well, I mean, if we’re gonna suggest that we gotta transfer power to Pence because Trump is taking a steroid that might cause mood swings, therefor we gotta avoid mood swings, well, what causes mood swings? I don’t think there’s any doubt out there that menopause does. And, what, Kamala Harris is 55. So, as far as I’m concerned, she disqualified. Disqualified. She can’t ever become president. Mood swings.