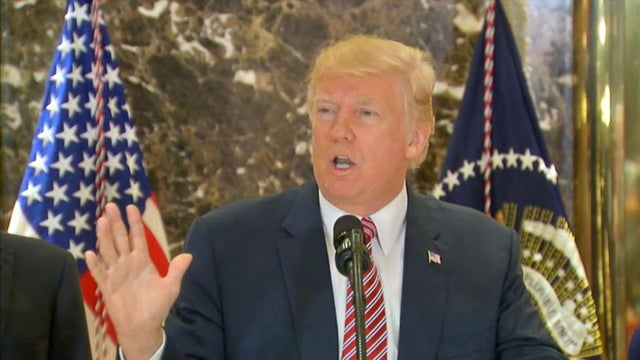 RUSH: So, you guys don’t know if the Biden speech was prerecorded or not? (interruption) Well, I didn’t even think about it. I got an email here from somebody demanding to know. I hate distractions, and I’m just trying to get rid of a distraction here. 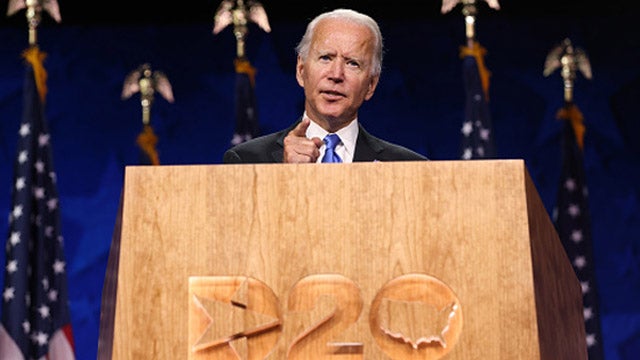 Whether it was live or on tape, one thing Biden did last night was repeat this humongous lie that Trump said that the Aryan Nation’s white supremacists, neo-Nazis at the Charlottesville, Virginia, rally three years ago were “very fine people.” It is a hoax. It is an element of the effort to get rid of Trump, just like Trump-Russia collusion and meddling in the election and all of that.

So, here. Grab sound bite number 4. Here is Biden last night during his acceptance speech at the Democrat National Convention…

BIDEN: He mentioned Charlottesville. Close your eyes. Remember what you saw on television. Remember seeing those neo-Nazis and Klansmen and white supremacists come out of the fields with lighted torches, veins bulging, spewing the sand — same anti-Semitic bile heard across Europe in the thirties. Remember the violent clash that ensued between those spreading hate and those with the courage to stand against it. And remember what the president said when asked? He said there were, quote, “very fine people on both sides.”

RUSH: So, Biden keeps repeating this. The Democrat Party keeps repeating it — and it was a lie the first time somebody, whoever it was, made it up. So, let’s review. You just heard in his acceptance speech, Biden repeats the lie that Trump called a handful of so-called neo-Nazis at the 2017 Charlottesville protest over the destruction of a Robert E. Lee monument — which was what they were there to protest.

The lie is that Trump called them “very fine people.” It’s the same lie that Biden used to kick off his campaign. This is the second time — minimum second time — that he’s uttered it. Biden has repeated this lie in almost every speech he has given since then, and he does it almost word-for-word. But as we have pointed out tiresomely, Trump actually condemned the neo-Nazis.

Trump said that the neo-Nazis should be condemned totally. Biden knows he’s lying about this. Audio sound bite number 5. We’re gonna go back. The bite you just heard… Well, it was from last night. Let’s see. Let me get the date. This thing happened in 2017. I don’t have the exact date. But here is… (interruption) Yeah. The bite coming up is August 15th. Anyway, here’s what Trump said…

THE PRESIDENT: I’m not talking about the neo-Nazis and the white nationalists, because they should be condemned totally.

RUSH: That was Trump at New York City Trump Tower speaking to reporters about the protests and violence in Charlottesville, and that’s what he said, “I’m not talking about…” This is when he was correcting everybody. “I’m not talking about the neo-Nazis and the white nationalists because they should be condemned totally.” You know, he was making it clear that he was not calling them “very fine people.”

President Trump repeatedly condemned the neo-Nazis in Charlottesville in August of 2017. He totally did so. Moreover, the neo-Nazis were not the only one violent group that was in Charlottesville. The clash was not with those standing against hate peacefully. The clash was with violent, black-clad Antifa extremists. As to “very fine people,” Trump had been referring to peaceful protests both for and against the removal of the statue of Robert E. Lee.

Even Jake Tapper of CNN has admitted that Trump did not call neo-Nazis “very fine people,” yet it is the core message of the Biden campaign. It remains a lie, and Biden keeps telling it, but not just Biden. The media keeps telling it. You have to understand, even Jake Tapper knows it’s a lie, and he allows it to continue to be repeated on CNN and elsewhere in the mainstream media. Here. Play sound bite number 5 again. 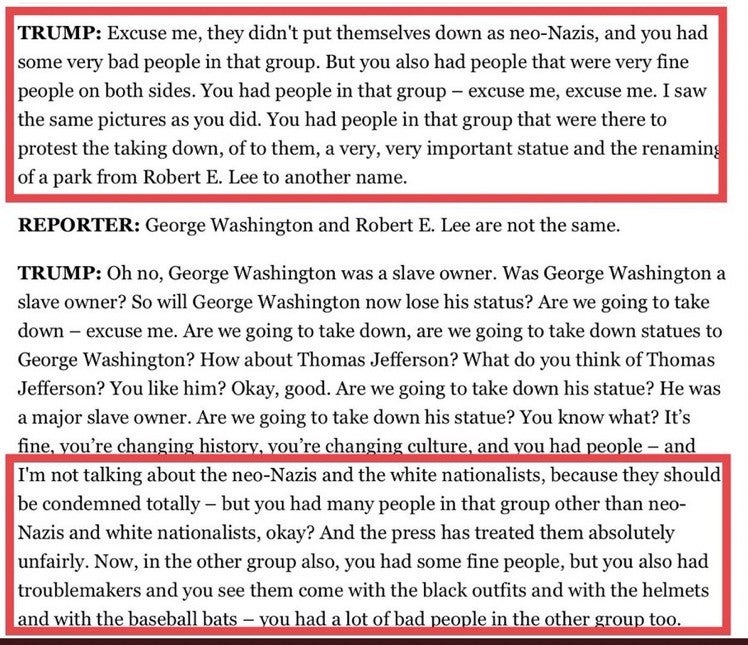 THE PRESIDENT: I’m not talking about the neo-Nazis and the white nationalists, because they should be condemned totally.

That’s all Trump was saying. It had nothing to do with the skinheads and the white supremacists and whatever the hell they were there for. But the point is everybody knows this. And I can’t tell you how frustrating it is to have to correct this every damn time Joe Biden opens his mouth about it.

And the reason it’s frustrating is that everybody knows. Everybody knows what an abject lie that this is. Okay.

CALLER: Hi, Rush. It’s an honor to talk to you. I’ll be quick. I’m 58 years old. I’m retired from the NYPD, and I’ve been listening to you since you were on TV late-night.

CALLER: I thank you for my political thoughts. Very simply, if I were Donald Trump’s campaign adviser, I would buy media time, TV time in every one of the swing states, and I would play Kamala Harris’ words during the Democratic primary accusing him of being a segregationist and the reason why she had to ride the bus. And play the excerpts of her saying that she believed all of the accusers of his sexual misconduct. And I would close it with, “I’m Donald Trump, and I approve Kamala’s message.”

RUSH: Oh. So you would have Trump’s campaign commercials be Kamala Harris from the campaign, from the debates, saying that she knows Biden’s a racist, made her bus to school and that she believes all the women who said that Plugs abused them. I’ll bet we do see a commercial of that. I don’t know how frequently, but I’ll bet we do. That’s a good idea, Jim. And I’m glad you called. I’m glad you’re out there too. Thank you.