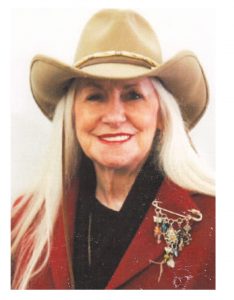 Bonita Reynolds, daughter of the late Harold Dwight Von-Rudrauff and Lorene ShrableVon-Rudrauff, was born February 28, 1940 in Viola, Arkansas and died April 16, 2018 in, at the age of 78 years.

She went to school at Viola, Arkansas; lived on a dairy farm; milked cows; played basketball for Thednal Hill with the best basketball coach in Arkansas, who was a mentor to her. His advice to her was never give up, just keep on.

The Church of Christ was an important part of her life, providing strength and encouragement for the difficult times. It was a place for her children to grow up in a Christian atmosphere. She made several good friends over the years she attended there. Her mama and daddy always took her to church.

When she was eleven years old she lost her daddy and her mother was killed in a car accident when she was twelve, so her grandparents continued to direct her with their love, and took her in as their own. And she felt like if she owed anyone anything, it was her Grandma Lillie Shrable, an angel on this earth. She was the most humble and caring person that ever walked this earth.

One thing we can give one another is a smile, a hug, and a kind word. You never know what they may be dealing with until you walk in their shoes. We will never solve all world problems or understand all, or see through them. We must help those get through life with our help if needed. We must be a friend, listen if needed, give advice if asked, and love them for them, not for the pedigree they were born with. We cannot help who our parents are, the color of skin, rich or poor, but just love their soul. We should never judge others; whether they be weak, poor, or needy. Don’t stomp them when they are down. Give them a helping hand if needed. Be there for them, love them through addictions and after they overcome those things. Give them encouragement through their struggles. Whatever we are dealing with in this life, God is in control of it all.

Burial will be at Pleasant View Cemetery, Gepp, Arkansas, under the direction of Carter Funeral Home, Inc., West Plains.