RUSH: “U.S. Jobs Trounce Forecasts: 266,000 New Jobs.” The aforementioned experts — themselves dripping with hatred — predicted 180,000 jobs. It’s 266,000 jobs created. The economy is roaring. We have a 50-year low unemployment, 3.5% — a 50-year low. More black men have jobs than ever before. The African-American approval rating for Donald Trump is hovering in the 34 to 35% range. Audio sound bite number 3, Jim Cramer CNBC this morning.

CRAMER: Cable, CNN, MSN, what do they cover? Number 16, 16th, is positive economic news. All the rest of ’em are negative! So you know what’s going on here. People don’t want to say good things, and this is the best number I’ve ever seen in my life! … When we win the trade war — which you know we’re gonna win now because we have the better numbers — then they’re going to have to put the jobs here. That’s what they’re going to have to do. We’re not even talking about that yet. In the end, the Chinese are gonna have to put the jobs here. Because this thing is… The president can walk away from the table with this number. You can’t contradict these are the best numbers of our lives. It doesn’t matter whether you hate him or like him, these are real numbers!

RUSH: There is nothing comparable to this, folks: 3.5% unemployment, a 50-year low, African-Americans with more jobs than they’ve ever had before — expressed as a percentage and in real per capita numbers. Wage growth is commensurate with the job creation. What Cramer’s talking about there with the ChiComs… I addressed this yesterday. The trade deals that we have had with the ChiComs for the last few decades literally added up to the greatest transfer of wealth out of the American middle class. It went to China.

How did that transfer of wealth happen? It’s not that you were taxed per se and they took a certain amount of money from you and sent it to the Chinese. The way it worked was with trade deals, jobs were lost. That’s middle-class wealth. Manufacturing and other jobs went over to China. In addition, the products that were then manufactured in China were allowed in, but the jobs remaining in America and products manufactured here, the Chinese did not buy, they did not import. But we imported their products that used to be made in the United States. 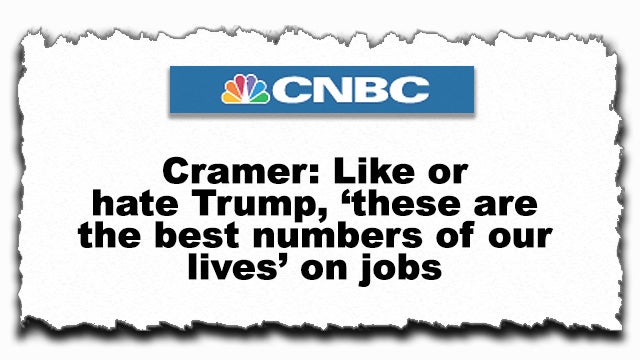 It was a never-ending cycle that repeated, and it was part of the deep state New World Order. And for who knows what reasons. Keeping the Chinese at bay. Ostensibly they could make the case they were trying to infuse a little capitalism into a communist system, and there may be a point to be made for that. But anyway, this was what Trump was talking about all during the campaign. Now, Trump never used the words, “Our trade deals with China have resulted in the greatest transfer of wealth ever out of the American middle class.”

But when Trump talked about how much money it cost and how stupid it was, that is what he meant. Cramer is saying this upcoming trade deal with the ChiComs now, Trump’s gonna win it, and he is. No matter how long he has to wait, he is gonna win it because this is something that fundamentally must be done, and the strength of the U.S. economy in the midst of this trade war with the ChiComs is gonna show them they’ve got nowhere to go — and in the midst of all of this, what are the Democrats doing?

The only fingerprints you’ll find attached to Democrats are on this bogus impeachment move because all it is is a campaign tactic. It’s all they’ve got. And it is being driven… I was on Fox & Friends today, and I made the point, but I’m gonna keep pounding this point. This is driven by raw hatred. Raw hatred for you for electing Trump. Raw hatred for us. Raw hatred for him. It’s on display each and every day when any Democrat goes on television.

They cannot hide their contempt, and now they’re not even trying to hide it. And for some reason they believe that matched against all of this great economic news — which has not abated. It has continued on its upward trend line since Trump was inaugurated. Actually, since before that. People were optimistic before Trump was even elected on the hopes that he would be elected. The trend line has been constantly upward. The Democrats literally believe they were elected to run the House to get rid of Donald Trump.

Donald Trump was elected for many reasons. One of the reasons was to drain the swamp — to reduce the power, the reach, the impact of all of these elites who were responsible for transferring wealth out of the middle class to China and Iran and wherever else. Trump was elected to stop that. He was elected to expose these people. He’s succeeding in doing that. He’s gonna win in a landslide. Donald Trump’s doing everything he said he was gonna do.

If you want to know the real measure of voter sentiment, take a look at what happened with Plugs out in Iowa yesterday. That’s where real voter sentiment is.

RUSH: I can’t wait to get to these sound bites, all these Democrats and experts predicting an imminent rescission just this past summer. We’ll get to that as soon as we get out of the break the next half hour. But listen to this. It looks like Donald Trump got the last laugh. A few days after Canadian prime minister Justin “Blackface” Trudeau was caught having a laugh at the expense of Trump, the U.S. economy is reported to have added 266,000 jobs in November while Canada — dadelut, dadelut, dadelut, dadelut — lost 71,200 jobs, the biggest monthly loss of jobs in Canada since the financial crisis. 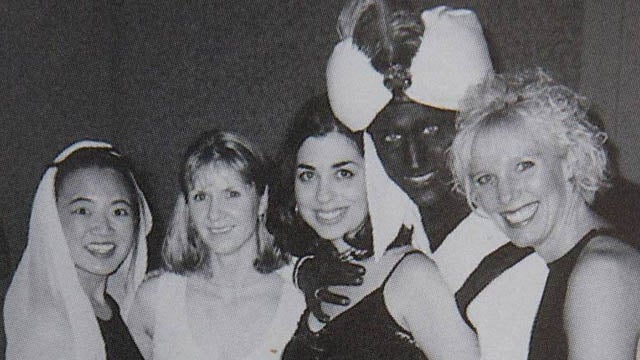 Remember when that was? That was 2008. So maybe along with the French President Macron, maybe this little guy — maybe this young whippersnapper up in Canada — should stop making fun of Trump, and maybe, just maybe start learning from him. We added 266,000 new jobs in November. Experts forecast 180,000. Canada: Minus 71,000.