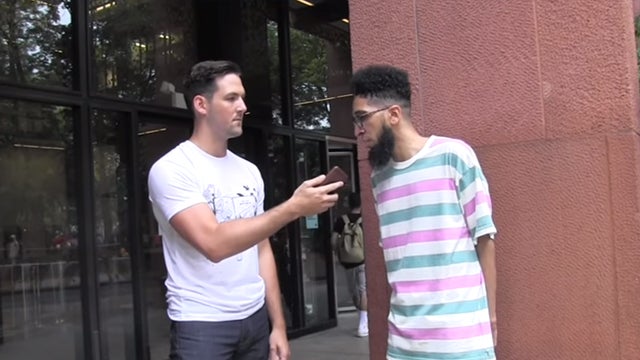 RUSH: As I say, we know we battle ignorance. We know we’re up against a lot of ignorance and actually some very bad education. Some of the ignorance is not really ignorance; it’s people that think they know what they don’t know. They have been ill-educated, maleducated, and this is happening at I think an increasingly alarming rate in high level education, so-called high level, high school, beyond into college.

And Campus Reform, we have been citing their work since they began. They are a group of people that run around and document the insanity and the ill-education, lack of it, on major college campi. And yesterday they posted a new video. Media director Cabot Phillips running around New York City asking college students what they think of President Trump’s pick for the Supreme Court.

PHILLIPS: What’s your reaction to the justice that he nominated today?

UNIDENTIFIED MAN 1: I see it all over the news that, like, he’s, like, a racist and (bleep).

UNIDENTIFIED WOMAN 1: This new, like, nominee is very racist and I think it’s starting a new wave of something, something very negative. And I’m really scared about what will happen in the future and what choices he’ll make.

PHILLIPS: So what reaction have you seen on social media today after the news?

UNIDENTIFIED WOMAN 2: Oh, outrage, as it should be.

UNIDENTIFIED MAN 2: Think this is just a reoccurring thing. He keeps doing this with different positions and just doing whatever he wants, abusing his power.

PHILLIPS: So do you feel like his pick is an abuse of power?

UNIDENTIFIED MAN 3: His entire cabinet and everyone he’s chosen has been the white supremacist legion of doom and it’s dangerous to everyone who looks like me. They should all wear white hoods and burn crosses at the Capitol.

RUSH: Now, that last guy, I saw the video, looked like Cornel West. It wasn’t. I’m just giving you an idea what the guy looked like. Now, some might think, “Come on, Rush, don’t buy this. These guys at Campus Reform, they went out and they found idiots and they’re telling us they’re college people.” No, no, no. They went to college campi. This is genuine. This is the level of ignorance that we’re up against.

But you have to ask, practically every one of these answers, racist or bigot, or what have you. Where do you think they’re learning this stuff? But there isn’t a nominee. But see, as far as they’re concerned, it doesn’t matter because anyone Trump would pick is going to be exactly what they’ve been taught a conservative or Republican is. And this is the best illustration that I have today to illustrate to you how constructive thinking, critical thinking is not being taught on campus. In fact, it’s being discouraged.