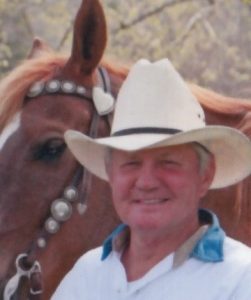 Charles “Charlie” Isom Simpson was born in Springerton, Illinois on March 15, 1946 to William Anderson Simpson and Nellie Alberta Wilson Simpson. He departed this world on July 7, 2018.

Charlie was an adventurer in his early years. He left home at the age of 15 to hitchhike around the country.

On October 3, 1970 he was married to Gwenda Reasons, and they were blessed with two children.

Charlie was a welder by trade. Not only was it his career but he enjoyed perfecting his craft and often times could be found in his shop under a welding hood. He worked offshore for 10 years and spent 10 years at Southwest. He retired a Union Boilermaker in 2008.

Charlie loved his family above all else. He took immense pride and joy in his children and grandchildren. Charlie enjoyed spending time with his family and friends whatever they were doing, building forts in the living room with his grandkids, working on his farm, or just sitting on the porch visiting. He enjoyed horseback riding and loved spending time in God’s country, as he would say. He also loved to tell ghost stories. Charlie never hesitated to help anyone in need if he could.

Charlie was of the Christian faith.

In lieu of flowers, memorial contributions may be made to Oak Mound Cemetery Fund and can be left at the funeral home.