RUSH: Look at this headline: “Chinese communist newspaper endorses Joe Biden.” Every year, every election year we find that communists around the world endorse the Democrat candidate.

We find communists around the world start sounding just like the Democrat candidates running for president here. “China’s state-controlled Global Times did not print a traditional endorsement, but the paper makes it clear that China wants Biden to beat Trump, which isn’t a surprise, given Biden and his son’s cozy relationship with China, not to mention that China and Cuba and other communist regimes did endorse the Obama-Biden ticket during both elections.”

Look at this headline. This from the Washington Examiner. “Emotional breakdowns after Trump ads appear on the Washington Post website.” What is this? It says here — Becket Adams wrote the piece — “Democracy died a little this week after the Washington Post allowed pro-President Trump campaign ads to appear on its website, according to distraught members of the press.

“‘THE RADICAL LEFTIST TAKEOVER OF JOE BIDEN IS COMPLETE,’ read the big, splashy Trump 2020 advertisements that appeared Thursday morning on the Washington Post’s website. … ‘What a completely horrible error of judgement,’ tweeted Columbia Journalism School’s Emily Bell. ‘*Any* issue-based advertising takeover of a masthead or homepage should by default be against the rules of a news publication.’”

Meaning: How could the Washington Post allow this? “Journalist and Emory Human Health senior fellow Maryn McKenna added elsewhere, ‘This is a shocking error of judgment on the part of [Washington Post]. …’ The Washington Post’s own Hamza Shaban, who covers business, sought to shame his employer over the ads… 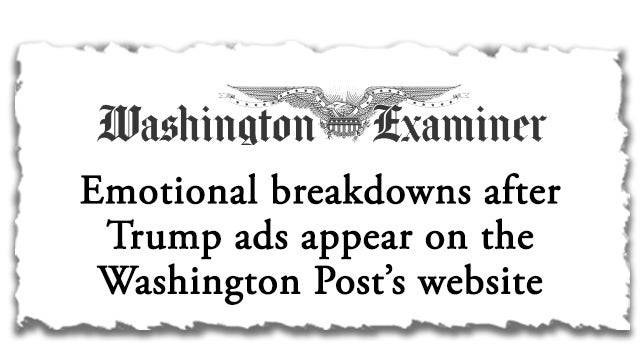 “But the most frantic, and funniest, reaction Thursday came from City University of New York journalism professor Jeff Jarvis…” Now, this guy used to be a big muckety-muck at USA Today, and he “demanded…” Jeff Jarvis “demanded apologies and other forms of satisfaction from the Washington Post for allowing Trump campaign ads to appear on its website.

“‘No, [Washington Post], no, no NO. How dare you?’ he asked in a lengthy tirade posted to social media. ‘Were these pieces of silver,’” meaning the cost, “‘worth the price of your soul? The Post not only sold its front page but also sold a takeover. Who the f— decided this? I am so ashamed of you, [Washington Post].’” We have a legitimate emotional breakdown occurring — a legitimate emotional breakdown occurring all over mainstream media journalism — because the Washington Post sold a Trump campaign ad on its website.