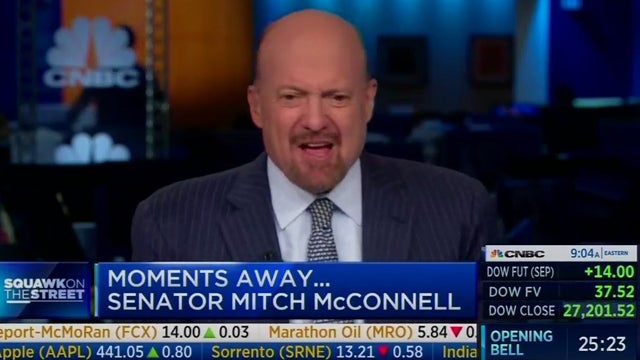 RUSH: Grab sound bite number 9. This is Jim Cramer, CNBC this morning, the program Squawk on the Street. It’s kind of funny. Cramer is telling Biden not to be the guy running for office by representing the party that stopped Trump from giving away money. Now, this is a unique way of looking at it.

So they are of the belief that all they’ve gotta do is stop this deal from happening and the Republicans will get blamed and then Trump will be defeated. And Jim Cramer is telling them, you guys are missing this, specifically Biden, you’re missing it. Here, listen to what Cramer says.

CRAMER: The president’s gonna do an executive order if we don’t do something and I don’t know if that’s legal or not. Nobody’s gonna stop a president giving money to people. Who’s gonna do that? What a great thing to run on. Hi, I’m President Trump, and I wanted to give money to you but I wasn’t allowed to? I mean, gee, that’s why they should come up with a deal by Friday because that is a nonstarter if there’s this buy Biden that’s running — you don’t see a lot of him, but can you imagine what he’d say, I represent a party that fought so hard for you to get your — to make it so you don’t get benefits? That is not — I don’t know — is that something that Biden can run on? I fought hard for you not to get money?

RUSH: So Cramer is begging the Democrats, don’t do this because you’re not gonna get away with blaming Trump for it. Trump is gonna make sure people get the money one way or the other, if it’s an executive order or if it’s a deal. But you do not want to be the party that saw to it that people didn’t get money when the government wanted to give them some.

Now, you and I may be fed up with all this spending, and you and I may be over the top with it, but it is what it is. Where have we heard that before? The bottom line is just in the pure politics of it, Cramer has a point, does he not? When the government is giving away money, you don’t want to be the ones seen as standing in the way of it.