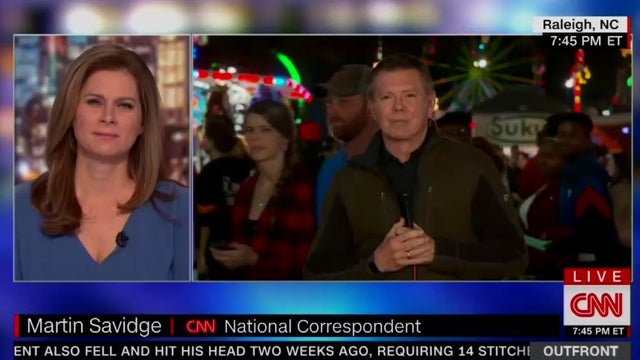 RUSH: This is from last night, Erin Burnett OutFront. They sent a reporter, Martin Savidge, they sent him on safari down to North Carolina to try to find people — By safari, I mean he had to get a visa, sending him to a foreign country. CNN sent a reporter to a foreign country, North Carolina. They wanted to find out what kind of impact Schiff and his impeachment proceedings are having on Trump voters. And they were shocked at what they found. Both Democrats and Republicans think Trump should not be removed. They think the election should decide. Here’s Martin Savidge, CNN, last night.

JIM UZZLE: I think it’s a waste of the taxpayer’s money.

MALE VOTER #2: No, I don’t really know much about it at all.

SAVIDGE: In this state that went for Trump by less than four points, Jim Uzzle is angry at Congress for even considering impeachment. 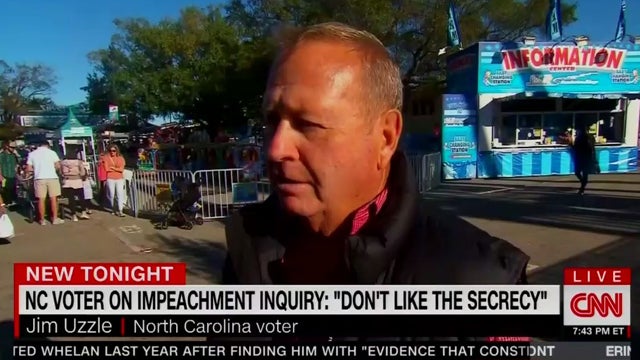 JIM UZZLE: I don’t think he’s broken the law and I wish they would vote on trying to make things right in America versus wasting their time and money, our money, on a lost cause.

SAVIDGE: Most of the Trump supporters we talked to were unmoved by days of explosive testimony and revelations against the president. Do you think that it changes the minds of Trump supporters?

JEFF MASON: I do not. I think the ones of us that support him will continue to support him. If you look at the economy there’s no way to deny that we’re doing pretty amazing.

SHERI PRICE: He don’t need to be taken out. He’s the only one who’s gonna tell the truth and he can’t be bought.

SAVIDGE: Rich Blewitt reflects a new and growing criticism of the impeachment inquiry by Trump backers. A perceived lack of openness. 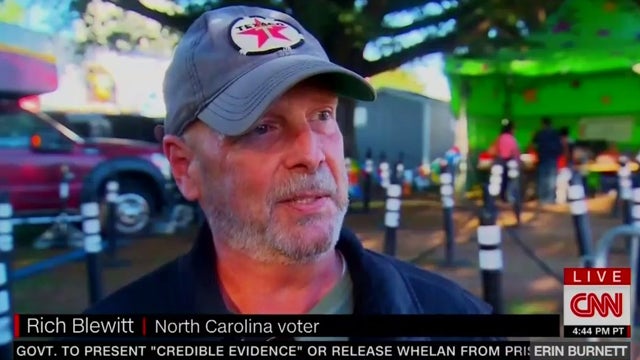 RICH BLEWIT: I just don’t like the secrecy. It just sounds wrong the way they’re going about it, that’s all.

RUSH: Do you realize, this is not playing at all the way the Democrats are planning for this to play. It’s not playing anywhere close to the way they’re dreaming it. In fact, these Trump voters see it for exactly what it is. Schiff and his merry band are not fooling anybody. Remember, if they can’t separate Trump’s voters from Trump, none of this is going to matter.

For this to work they have got to drive Trump’s approval numbers down. That’s the only way they think they can get Republicans in the Senate to abandon Trump. If Trump’s voters don’t go anywhere, this is gonna implode on them, and it has with the announcement of a criminal investigation into the Obama administration. I mean, that’s not how it’s phrased, but that’s what it is. Everybody involved in this investigation of Trump did so while working for Obama. It was the Obama administration when all of this happened!

Brennan, Clapper, Strzok Smirk, Comey, McCabe, you name it, they’re all in the Clinton administration, or Obama administration. So that’s what’s being looked at here. They’re losing the monopoly of the news cycle. And now they send a reporter down to North Carolina and they find out that the voters are pay attention to it and they’re not buying it. Now, he finally found a guy, Martin Savidge finally found a guy who thinks there might be something there. Here’s that sound bite.

SAVIDGE: Dennis Englebright is an exception. He also voted for Trump, but he’s starting to believe the president may have done something wrong. 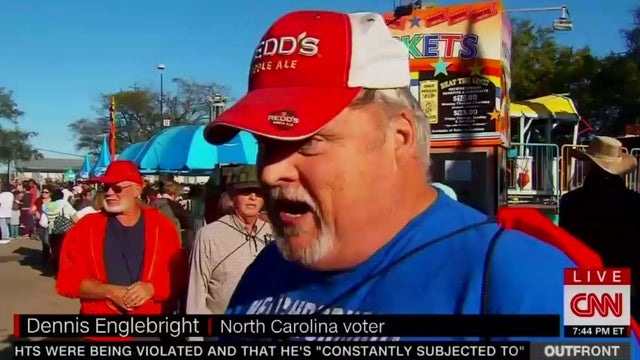 ENGLEBRIGHT: At first I didn’t. I thought it was just, they was after him, but every time somebody talks more about it, all of ‘em can’t be lying.

RUSH: They found one guy, you think if they would have found an endless parade of guys we’d have heard from more than one guy? And the one guy they found is somebody they hate. Did you hear this guy’s accent? Democrats hate these people. This guy sounds like a hayseed, hick. So this did not go. They had to struggle to find one guy. And I know they had to struggle because if they a found more than one guy, they would have heralded it.

And now, my friends, the piece de resistance. Listen to what the CNN reporter says about how both Democrats and Republicans feel about removing Trump from office.

SAVIDGE: Another question that we put to voters was impeachment worth it given the fact that there’s an election a year from now? That broke on party lines, supporters of the president say no and those opposed to the president say yes, but they all agreed on one point and that is if the question is, should the president remain the president? That they all said should be decided by voters. Erin?

BURNETT: And that, Marty, is a really important point for a lot of people to hear in Washington.

RUSH: I would say so! That no matter how they fell down to Trump they think the people ought to decide this and not Pencil Neck and his private little cabal two stories below street level in the House of Representatives. And here’s Erin Burnett, “You know, Marty, that’s a really important point for a lot of people in Washington to hear.” Even if they heard it, they would ignore it. They can’t help themselves.