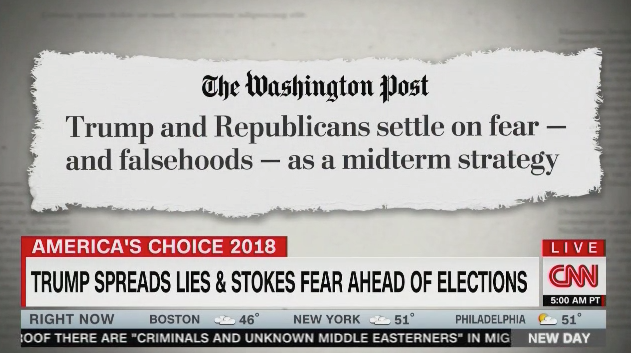 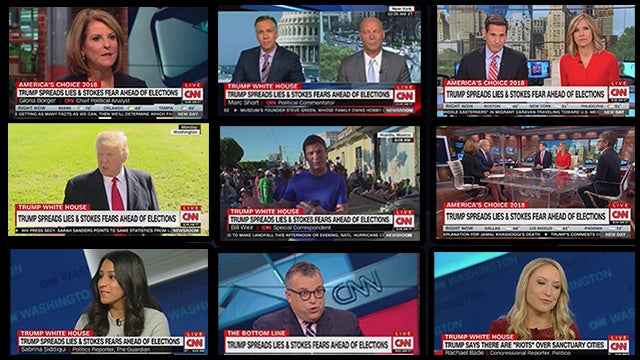 RUSH: No, no, I’m gonna have to go to the eye doctor. I’ve tried every formulation of reading classes I can find. I can’t get rid of the blur. And it’s actually not a blur. It’s ghosting. And I’ve put up with this for a number of years. Now I’m getting fed up with it. You know, they make these newfangled reading glasses designed to not cause as much eyestrain when you look at a lot of computer screens and displays, but they cause a blur.

It’s not actually a blur. It’s like a ghosting image above each letter, and I’ve tried every configuration I can find. I guess I’m gonna have to break down and go to an eye doctor. I have never been to an eye doctor in my life. The last eye test I took was for a driver’s license I don’t know how many years ago. But that’s a perfunctory thing. (interruption) No, no, no, no. Just… Maybe if anybody has any ideas out there.

Is there a brand of reading glasses that don’t blur when you’re looking at computer screens?

Anyway, greetings, folks. Great to have you. We have for the first time… Well, it’s tough to say first time. We have an official… There is no bones about it, no mistake about it. We have an official, complete and total alignment among the Drive-By Media. Now going into the last two weeks before the midterm elections, the mainstream media is completely aligned, they are completely in sync, they are totally coordinated. 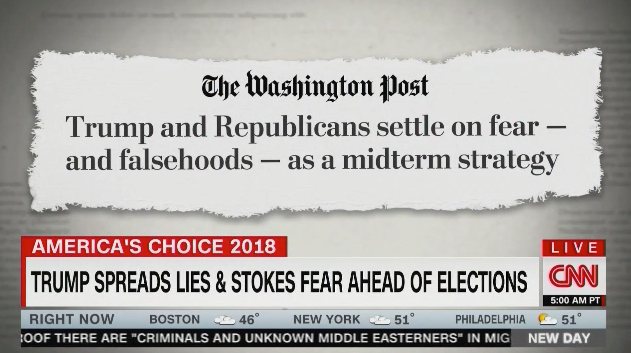 The same paper that all through the 2016 campaign said that Trump would end be being another Hitler, that Paul Krugman and the New York Times said would cause an economic collapse from which the country would never recover. The Washington Post is still claiming Trump is planning to take away all of your civil rights and that he intends to kill all of us by ignoring the dangers of global warming. But the unanimity here…

There obviously has been a meeting or there has been a memo or there has been a conference call or something, because everywhere you go today on any Drive-By Media website or any aggregator site like Yahoo News or anywhere else, the theme of the day is, “Trump Spreads Lies and Stokes Fears Ahead of Election.” When I got in here today and turned on the tube to start watching things getting show prep ready CNN had an interview going with their political director analyzing all the lies Trump told last night in the rally down in Houston.

They were going through practically every sentence, every paragraph. They were dissecting and pointing out how Trump… They are getting so frustrated, folks, they can’t see straight. They’re beside themselves. They are now willingly casting aside any idea that they are objective and fair and balanced. They have now gone all-in in total… Now, they’re unified every day. Don’t misunderstand. I’m not ignorant about this. I know they’re unified every day.

I’m talking they have a theme that they have all unified behind today and I think for the remainder of the time or these next two weeks, and it is Trump Spreads Lies and Stokes Fears Ahead of Election.” Now, I thought when I got in here and saw that one time, I figured it was just, you know, a chyron graphic to represent what they were doing at that time. But every time I looked up at the TV over the next three hours, I saw that banner.

It didn’t matter what else was being discussed. It didn’t matter who the guests were. Then I saw the Washington Post thing. So I checked the New York Times, and there it is: Spreading fear, telling lies ahead of election. This caravan thing… (sigh) You know, I continue to study this and try to pick it apart, analyze it and make sense of it from a political standpoint, and I still can’t find anywhere in the media any concern about it.

I can’t find anybody concerned or worried or thinking that there is anything abnormal about it. In fact, what you find in the Drive-By Media is entire, total mischaracterizations. “These are desperately poor people, wonderful people fleeing poverty in their homeland,” and that’s not actual what they are. They are part of an organized mob. There is no question about this. It is an organized mob, and, like everybody else the left is behind it. At some point in the future we’re gonna learn exactly how this thing was pulled off.

You look at this caravan, and it ought to scare everybody. It is exactly the threat this country has faced for years. We now have a focused, concentrated microcosm of it with 7,000 people. It may be 8,000 or 10,000 if they get here by Election Day. They’re still a thousand miles away yet vowing to get here by Election Day. The Drive-Bys claim they’re walking. They’re not walking. They can’t. They’ll never cover a thousand miles in two weeks if they’re walking.

It’s physically not possible. So when the cameras aren’t there, some of these people have to be being driven. But it is all orchestrated. None of this is organic. None of it is real from the standpoint that individuals totaling 8,000 people decided on the same day or in the same week or even in the same month to start walking from Honduras to the United States. That just didn’t happen. It doesn’t happen. Somebody is making this happen. Somebody set this up.

It obviously is a bunch of leftists who set this up, and when you look at that and examine it from that standpoint, you’ve got to wonder what it is that makes them think they are going to win massive elections. And it is clear to me, not only examining the caravan… The mob. See, there I go. I even get caught up calling what it wasn’t. 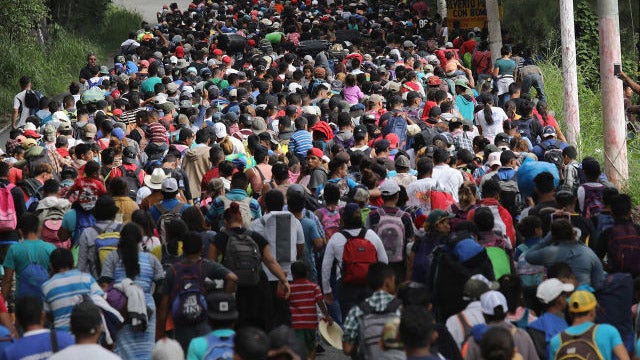 It’s not a caravan. It’s a mob. It’s a bought-and-paid-for, structured, scripted mob. The Democrats clearly believe — and they have believed since the 2016 election — that the way to win back their power is to stoke and create Trump hatred that they think organically, naturally exists in either a majority of Americans or close to it. And that’s what they’re trying to capitalize on is massive Trump hatred, massive Trump resentment.

They’re not doing it by talking about issues. Now, in individual campaigns you’ll hear Democrats promise to repeal the tax cuts and roll back things that have led to economic prosperity. But in terms of the national message from the Democrat Party, you’re not getting one. You’re getting Trump fear, Trump hatred — promoting it, exacerbating it, or what have you — and it’s silly. It’s not the way you build a movement.