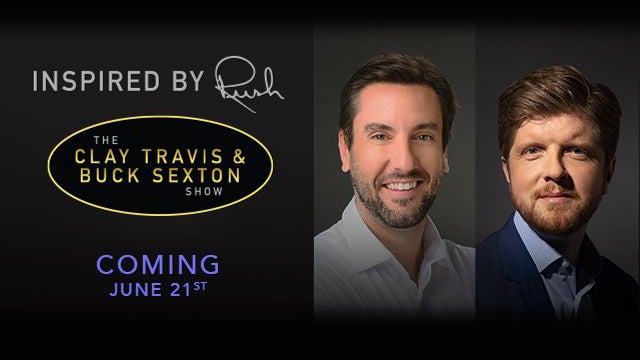 TODD: To see what’s to come on the EIB Network — in just about two weeks, the EIB Network will welcome two cohosts at this time of day. You’ll meet and get to know Clay Travis and Buck Sexton, both inspired by Rush.

CLAY: We are going to represent what Rush has always represented, which is the full fruition of American freedom.

BUCK: There’s nothing that has ever been comparable to being at that golden mic.

ANNOUNCER: Clay Travis and Buck Sexton, Inspired by Rush. You’ll hear them both right here on this station, at this time, starting Monday, after Father’s Day weekend.

TODD: So the next couple of weeks, we’ll continue to include Rush’s thoughts and words, and all we cover and explore, before welcoming the new sounds and thoughts of Clay Travis and Buck Sexton. We wish them success. And I would just say this: I would hope that everybody will give Clay and Buck a great opportunity to cheer them as they grow in these roles. They’re both very accomplished men. Very, very accomplished at what they do.

And it’s the hardest thing in the world, to come into a role like this, with Rush being the best talk show host, the best radio broadcaster, who ever lived! And I don’t know any honest person who can ever honestly disagree with that. The proof is in the network, right. So please wish them well.