RUSH: The World Health Organization is now warning, my friends, it could take up to five years before the coronavirus pandemic is under control. You know what this is starting to sound like? This whole coronavirus is starting to remind me of climate change. “Rising sea levels in the next 10 years could wipeout New York and Miami;” then that doesn’t happen.

“Rising sea leaves in the next 20 years could wipe out New York, Miami, and maybe even Philadelphia!” The predictions keep changing. They get more dire. They get more dangerous, more extreme — and the reason for it is, they’re not able to scare people sufficiently about the impending doom. I mean, climate change has supposedly been going to destroy us…

In fact, the first that I found… I’ve researched it. The first climate change story that was written in the same way stories today are written was the early 1900s in a New York Times story. It’s eerie, folks. It’s literally eerie how similar a story about “the climate” and our inability to control it in the early 1900s sounds so much like the garbage that’s in the media about it today.

Well, the modern era of the climate change movement begins late 1978, ’79 with a Newsweek cover story on how the new ice age is coming. Five years later, they dump ice age and instead transition to global warming. “We’re all gonna melt! CO2 pollution, acid rain, whatever, is gonna destroy the planet, destroy the life support systems of our atmosphere.” 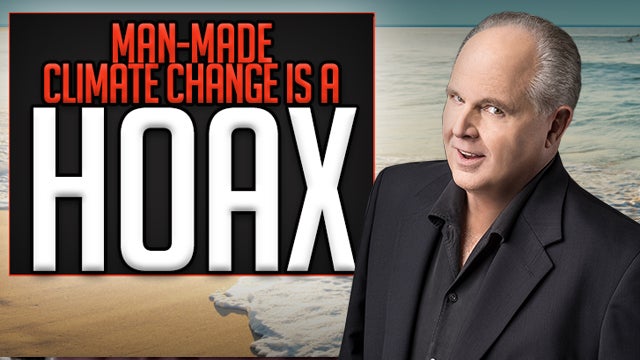 So it’s nothing but a scare move. It’s a scare tactic, a series of them, and you are aware of the transformation this story, this cause of climate change has gone through. I mean, it gets ridiculous sometimes, the predictions that are made, the warnings, the things that are going to kill us. And I’m noting a similar type of reporting now with the coronavirus.

It seems like every day we get some new scare tactic from some supposedly credible source. And what generally happens is after some reporting of what everybody would consider good news, in less than a day, a couple of stories come along, maybe three, that try to throw cold water on the good news and make it sound even worse than it was the day before — and that’s what this is.

“WHO Warns it Could Take up to Five Years Before the Coronavirus Pandemic Is Under Control.” This is just… It’s irresponsible the way this stuff is being reported, and the reason it’s being reported the way it is is because it’s all political now. Let’s review. The first objective was to what? Flatten the curve. And let me ask all of you a question. 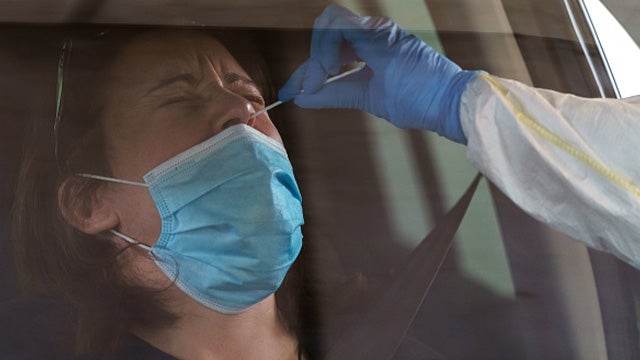 Or did you think it was a two-to-three week exercise to try to get a handle on things before things got out of control? I’ll guarantee you, the vast majority of people thought it was a temporary thing. It’s why there was so much acquiescence to it. The first thing they told us was, “We gotta flatten the curve! That’s right, and we gotta this word ‘mitigation.’” It became the number one most used word at the coronavirus task force hearings.

“Mitigation. We gotta socially distance. We’re gonna limit the number of people that get the disease,” and why? “Because we need to make sure the hospitals and the emergency rooms and the intensive care units are not overwhelmed. So we gotta flatten the curve.” A lot of people misunderstand that. They thought flattening the curve meant we’re gonna arrest the spread of the virus.

That’s never what it was about. But a lot of people thought that. A lot of people thought that they were participating — patriotically, supportively — in an effort designed to stop the virus in its tracks, when that wasn’t the objective ’cause it wasn’t possible. You simply can’t stop the spread of a virus by staying home. You’re eventually gonna leave home and then everything is just gonna pick up where it was left off.

No. The purpose of flattening the curve was to make sure the hospitals were not overwhelmed, and guess what? They weren’t, other than in two or three states. But even those states were not overwhelmed anywhere near what the predictions were. All of the temporary hospitals that were floated in there and that were built — the Javits Center and Central Park — were never used. 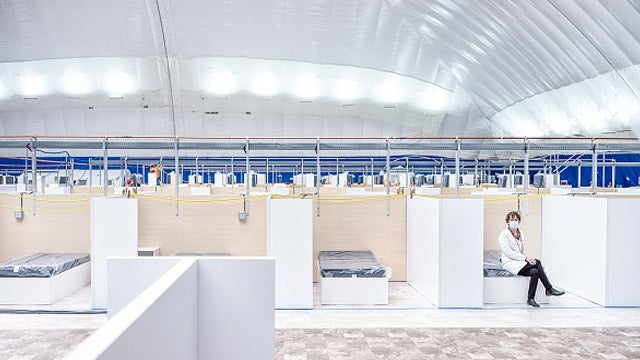 From all of these models in the U.K. and the University of Washington, who and which to this day have yet to be right. Then, after being told that we had to follow the data, well, we can’t end this lockdown. We can’t go out, we can’t return to normal until we have testing. Well, they didn’t say anything about testing when they were flattening the curve. At every opportunity to end this lockdown, which is unsustainable, at every opportunity to turn this country around, no, we can’t do it until X, until we flatten the curve, ’til the data gives us clearance, now we can’t do it ’til we have more testing.

So Trump has ramped up. We got more testing available in America than anywhere in the world. Trump points it out. Why is this a competition to you, Mr. Orange Man? When people are dying, what does it matter that we have more testing? Because you people have been whining and moaning that we don’t have enough of this stuff. And I’m telling you we got all the ventilators we need, we got all the N95 masks we need, we got all of the testing that we need. But we can’t reopen without more testing, and the more testing we get, it’s amazing how not enough testing it is. Now we gotta have testing for everybody every day. Until that happens, we can’t open.

And of course testing has its own quirks attached to it. The more you test, guess what? The more cases you have. So they are then allowed to report skyrocketing cases. They never attribute it to the fact that more people are being tested because the scare tactic is to make you think the virus is out of control. The virus isn’t out of control any more now than it ever has been. We’re just able to find out more people who have it.

You know what else? The more testing you do and the more people you reveal who have the virus, the mortality rate plunges. Ninety-eight percent of the people that get this virus recover from it. You would never know that if you listen to the Drive-By Democrat Party news every day. So we get more testing, and then it becomes not enough. Not enough. We need to test everybody every day. And then they say, “Well, you know, testing somebody one day doesn’t tell us anything about the next day.” Yeah, we know, but you’re the ones that said we can’t do anything without testing. “Yeah, I know. But testing only goes so far. Now we need an antibody test.” They keep moving the goalposts on us.

Now we can’t do anything ’til we get a vaccine. We can’t open the schools, we can’t go back to stadiums, can’t do anything ’til we get a vaccine. Now all of a sudden, after all this time where we were told that youths and young people were among the least affected, guess what? Here come stories, “Oh, no. Oh, no. Young people are getting a mysterious strain of the disease that we hadn’t seen.” It’s just incredible. Now people are having strokes and they can’t figure out why. “Oh, my God. This virus every day unleashes a new characteristic that we didn’t know.”

We can’t open now, says the World Health Organization, for five years, says right here. “It could take up to five years before the coronavirus pandemic is under control.” Well, Dr. Fauci is not gonna authorize reopening if the virus is not under control. So we had to flatten the curve, had to follow the data of flawed model, we need more testing so we got more testing. It’s not enough. Now that’s not enough. We need antibodies. That doesn’t mean anything anymore. Now we need a vaccine. There may never be a vaccine.

So they keep putting up roadblocks. It’s just like what they do with this climate change stuff, folks. As every dire prediction fails to scare people enough, they come up with more. And some of it is now starting to get absolutely ridiculous in terms of common sense.

RUSH: Here, look at this. Story from TheHill.com: “Klobuchar, Rubio ask CDC to investigate reports of coronavirus causing strokes in younger patients.” Oh-ho-ho. Just when we thought it was safe for kids, oh, no. Strokes? Yes, my friends, so they’ve convinced us that old people are at risk. But they’re gradually working on spreading the risk to virtually every age-group, every demographic, all three sexes — well, now it’s about 20 sexes, I guess — all religions, whatever. In other words, my friends, no one is safe. We’re all dead. It’s only a matter of time, which, of course, is a gigantic truism.

“Sens. Amy Klobuchar (D-Minn.) and Marco Rubio (R-Fla.) are asking the Centers for Disease Control and Prevention (CDC) to assess the risk of strokes in younger and middle-aged coronavirus patients. ‘We believe it is critical that the CDC evaluate the prevalence of stroke in COVID-19 patients, including the potential link to stroke from the development of blood clots caused by the virus.’”
Well, well, well. You see, my friends, there’s no hiding from the virus. There’s no escape.

Let me squeeze a quick phone call in before we have to abandon the content portion of the program for this hour. Scott in Pittsburgh. Great to have you, sir. Hello.

CALLER: Hello, sir. Continued prayers for your good health. I hope everything works out for you.

RUSH: Thank you, sir. Thank you very much. I appreciate that.

CALLER: Exactly. Yes. Yep. I was listening to you, and you’d mentioned about the experts with the climate change, and that just came to mind as far as the coronavirus. You’re going to say that we need to do all this stuff —

RUSH: This program inspires thought out there. That’s one of the things I’m most proud of. I’m happy to hear that. I’m just talking about the way the media, folks — well, not just the media, but the activists, the progression. We don’t know anything about the virus yet look at all the — this is no different than the Trump-Russia collusion story. One lie after another posed as a leak, a possibility, or what have you.