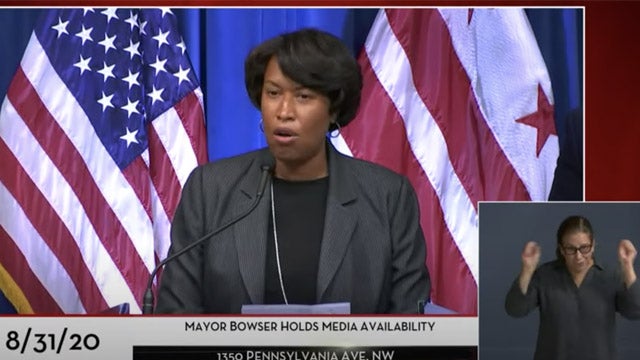 RUSH: The mayor of Washington, D.C., Muriel Bowser, in a press conference yesterday said that she had worried about America descending into a race war. I think, if I may be so bold, I think she’s worried there might not be a race war. I, last Friday and again yesterday, opined on this very program behind this very Golden EIB Microphone that I think that’s what the Democrats are fomenting. I think that their convention week was an attempt to bait Trump into hate. The Democrat week was just filled with hate.

I believe, as you know, the Democrat Party is the biggest hate group, the biggest organized hate group in America today. And I believe that they were actually trying to seduce or — “seduce” may be the wrong word — manipulate Trump into responding in kind. I think their intellectual superiority told them that, if they feature a bunch of hate — hate for Trump, hate for Republicans, Republicans are racists and bigots and homophobes and all — that Trump would respond in kind. And then they would be able to say, “Look at the hate coming out,” because the media’s never gonna accuse the Democrats of being hate-filled or using hate as a weapon.

And the entire Trump week was building and building to a crescendo, which was Trump’s acceptance speech on Thursday night. And so on my show open Friday and again yesterday, I opined that I think that they’re trying to foment a race war. I don’t have any doubt about it. I think their endorsement of Black Lives Matter, their endorsement of Antifa, the support for Antifa and Black Lives Matter, the standing aside and letting these groups literally destroy areas of their own cities — Portland, Seattle — these mayors, blue state mayors, the blue state governors, they stood aside, and they let that destruction take place because, believe me, they thought there was a positive outcome attainable. 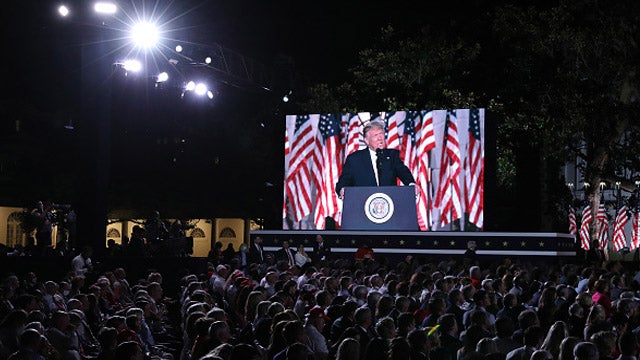 And that positive outcome to them was Trump being blamed for it, was Trump being blamed for chaos. I don’t think at the time they thought that they’d actually get away with blaming Trump for what BLM was doing or Antifa, but the overall chaos and the fact that it was ongoing and there was no solution to it, there was no stopping it, that’s what they hoped would portray Trump as incompetent and over his head, unable to do anything about it.

So they had to leave. There was no way that 1,500 people were arriving in cars and being dropped off. Some were, but the majority walked out when it was over, and they were accosted. Like Rand Paul and his wife, they were threatened. They were physically intimidated. And the D.C. police were nowhere to be found. They simply didn’t have enough of them out there. And the question is, where was the mayor, whose name is Muriel Bowser.

Where was she? She was permitting that to happen. Oh, they would have loved it had Trump attendees started firing back, started swinging back, started doing whatever. They could have then, the media in concert with the mayor, could have blamed the Trump people for what happened. That was the plan, make no mistake. And so far these plans have fizzled, and the Democrats look more and more like the coyote. 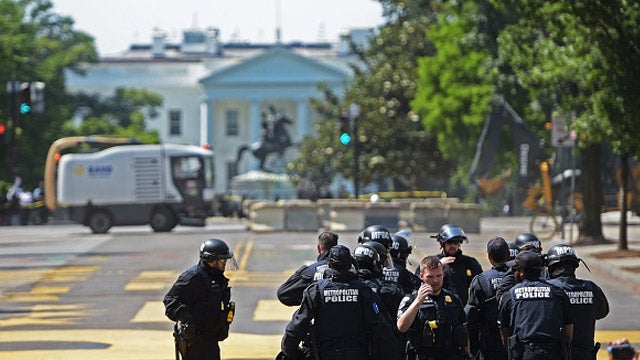 They have been trying to goad Trump into behaving in a way and goad Trump into promoting his supporters to behave in a way that would allow them to say white supremacy is on display, white privilege is on display. Then they could eventually lay claim to the charge of racism and a race war. Believe me, it’s what they’re attempting. And I think it’s confirmed. I saw this headline, D.C. Mayor Bowser says she’s worried about America descending into a race war? She’s giving it away.

She seems to be doing everything in her power to instigate a race war, if you ask me, starting with whatever did or did not happen after the Trump acceptance speech on Thursday. She said that the rioting in Washington that took place over the weekend could be domestic terrorism, it could be organized, it could be funded. That’s undoubtedly true.

In fact, I have a couple of stories claiming that many of these — we had a call yesterday about this — I think it’s becoming widely known that a number of these so-called protesters, peaceful protesters, the rioters, these people are being paid. They’re being paid. And many of them are staying in very expensive hotel suites and hotel rooms in whatever cities they’re being deployed to. Like most of the action in Washington on Thursday night, it was not perpetrated by people that lived there. These are people bused in, flown in, professional agitators.

It isn’t. It’s a bunch of bought-and-paid-for agitators that are brought in and being paid. But when I saw the mayor say she’s worried about America descending into a race war, she said, “I’m worried about the continued incitement of violence from leadership who should be focused on bringing our communities together.” 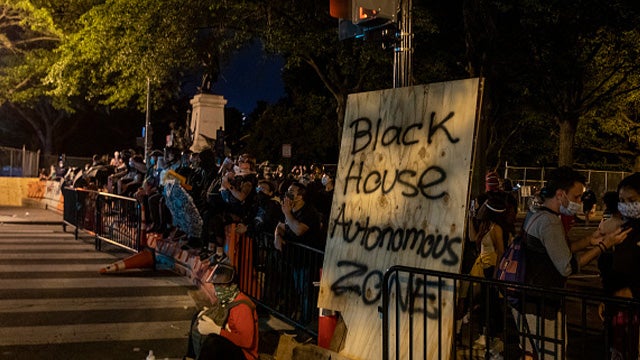 But it’s not Trump supporters who do this kind of thing. Historically, conservative Republicans do not loot, do not riot, do not even protest, peacefully or otherwise. It’s rare indeed when it happens. And yet here’s Muriel Bowser, the mayor of Washington, D.C., claiming to be worried about the continued incitement of violence from leadership, i.e., Trump. Trump is not inciting any violence.

That’s the key, my friends. That is the point. That is the essential, salient reality. Trump is inciting nothing. He’s not sending smoke signals or other coded language to supporters to go out and raise hell because the Trump people are not raising any hell. Oh, yeah, they might have a caravan, big four-by-fours drive through towns somewhere that’s already halfway destroyed anyway, but Trump people are not in any way committing any of this destruction.

So I find it fascinating here. “Our police and peaceful protesters will be safer when we come together as a community and tamp down this black versus white rhetoric.” Who’s using this black versus white rhetoric? I don’t think it’s Trump people. I think all this racial, racist rhetoric is coming straight from people on the left, straight from people in the Democrat Party.

As right-wing groups increasingly move to confront protesters in U.S. cities, demonstrators are assessing how to keep themselves safe https://t.co/g8jeTXjtTG

RUSH: Hey, I have a tweet here from the New York Times. It actually went out at 7:20 this morning. “As right-wing groups increasingly move to confront protesters in U.S. cities, demonstrators are assessing how to keep themselves safe.” I mean, you want to talk about something that’s 180 degrees out of phase.

I think that’s what’s happening here, much like I believe that the Democrats are trying to foment a race war, I think they’re trying to goad Trump into responding to the hate that is Black Lives Matter, that is Antifa, and don’t deny that’s the hate, it’s the Democrat Party that has all the hate. It’s breathtaking. They’re filled with rage. They’re filled with anger. They’re incapable of happiness. They are never witnessed smiling. Even when they get all of what they have demanded or claim to want, it’s never enough.

They live for the chaos. I can’t relate to it. I can’t relate to wanting to be miserable all the time, to be unhappy, to be angry. But they feed off of it. It’s like their fuel. And I think they’re trying to foment an actual race war that they can blame on Trump. It’s part of their effort to win the White House 2020, part of the effort to get rid of Trump.

I’m being a little redundant here, but I saw it I think get started during the Democrat convention. I think there was an attempt to — I used the word “goad,” and I think that’s an accurate descriptive here. I think they’re trying to manipulate Trump, make him so mad that he responds to their hate in ways that they could say are hate-filled and then blame Trump for responsibility for all the hate that’s going on.

And he has resisted it. The Republican convention, you couldn’t find any hate. All you could find was diversity and love and efforts to raise people up, to inspire people. So here comes this New York Times tweet, “As right-wing groups increasingly move to confront protesters –” What? “Right-wing groups increasingly move to confront –” Who we talking about here? We’re talking about protesters that are destroying Democrat-run cities.

We’re talking about whatever’s going on in Portland and Seattle and Minneapolis and Chicago and Washington and St. Louis. I mean, those people are not protesters. They’re looters. They’re rioters. These people are the genuine first class malcontents. They are Black Lives Matter, they are Antifa, they are Occupy Wall Street. They are doing the confronting. They are doing the manipulating. They are attempting to intimidate. These are the people coming out and they’re murdering Trump supporters now. They’re celebrating. When that Trump supporter was murdered they celebrated. They celebrated whenever a Trump supporter is injured or wounded.

They are confronting people. They’re the definition of “in your face.” But now the New York Times is actually writing a tweet here making it look like that these peaceful protesters are very, very worried about staying safe. How do they stay safe in the face of these Trump, out-of-control protesters? It’s the most amazing thing. I think that the left is trying to goad Trump supporters into fighting Black Lives Matter. I think that’s what they’re trying to inspire here. 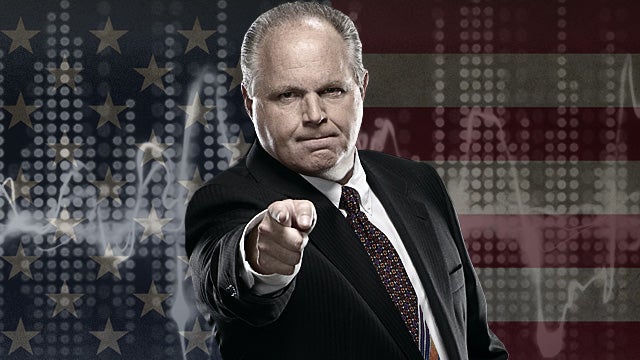 Tweets like this are designed to be manipulative. They’re designed to be so outrageous. Right-wing groups increasingly move to confront peaceful protesters in U.S. cities. Demonstrators assessing how to keep themselves safe. It is we who need to be kept safe from them because Democrat mayors and Democrat governors are not lifting a finger to make anybody safe in their cities or their states.

And somehow now this is Donald Trump’s fault, continuing the meme that we saw develop on Sunday. So far the Trump people have resisted these goads, they’ve resisted these attempts to draw them out, and I hope and pray that they continue to.