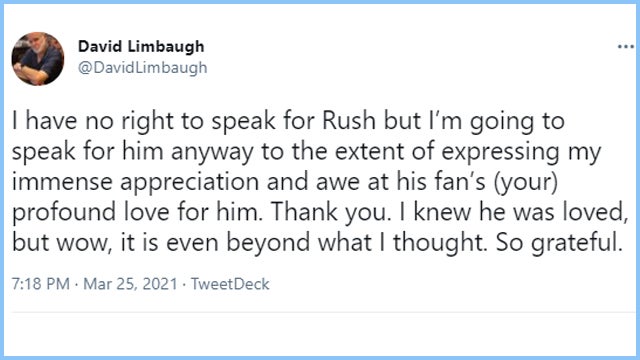 TODD: We need to let you know something about a very special program that will be available this weekend over at RushLimbaugh.com. It’s a tribute video about the life and career of our El Rushbo with many familiar voices — family, friends, and (laughing) the overrated staff. Just as Clarence Thomas is featured in this special, here’s a clip of Rush describing the kind of guy the media never portrayed.

RUSH: I don’t think you would ever meet anybody with a more infectious laugh. I think that you would be stunned. You would not find an angry, broken man. You would find someone who loves life, is thrilled and honored to be an associate justice on the U.S. Supreme Court. You would find somebody who is well-adjusted and happy, loves his wife, has a lot of hobbies. One of his favorite things to do, he’s got a big bus — like an RV bus — and during court breaks he gets in it and he and his wife tool around all over the country and they stop at RV parks and state fairs.

They stop at places where real people happen to gather. He might even stop at a Walmart and go in, might even go into a Costco and people come up to him all the time and say, “You look like Clarence Thomas,” and he just laughs at them and tells them that he is. You wouldn’t find a more genuine, real guy, and when the situation calls for sincerity, you’d get it — and you wouldn’t find anybody smarter, either. It’s a thrill to know him. It’s a lot of fun to hang around him.

TODD: (laughing) There’s something else about this feature. Rush’s brother, David Limbaugh, is in this video tribute, and he tweeted this out about all of us in Rush’s audience.

He said, quote, “I have no right to speak for Rush but I’m going to speak for him anyway to the extent of expressing my immense appreciation and awe at his fan’s (your) profound love for him. Thank you. I knew he was loved, but wow, it is even beyond what I thought. So grateful.”