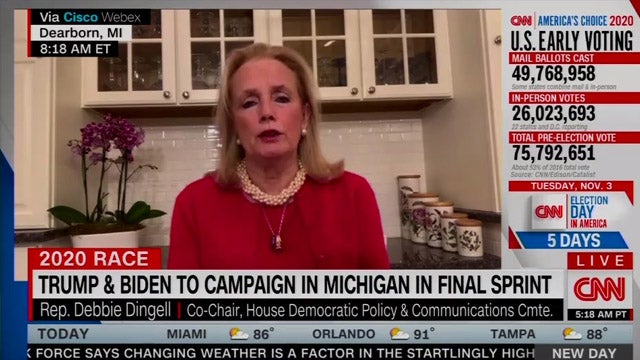 RUSH: Debbie Dingell last night… She’s the widow of… Did John Dingell…? Yeah, he passed away recently. Debbie Dingell, Democrat, Michigan, was on CNN Today talking about the state of the presidential race in Michigan. Listen to this…

DINGELL: It’s tightening here in Michigan. Some of the autoworkers who I thought were gonna go back to Joe Biden were very clear with me last night, they were voting for President Trump. We had 90,000 voters that didn’t even vote in the presidential elections last time. We’ve gotta make sure that people vote in the presidential and in the Senate race. So I’m not… You know, I’m not sounding the alarm bells like I was four years ago. But it is competitive. It’s tight.

RUSH: (summarized) “Yeah, it’s competitive. It’s tight. I got a lot of autoworkers who I thought were gonna vote for Biden but made it very clear with me, they’re voting for Trump.” She just discovered this. This is… I think if these Democrats would run around and talk to people, they would make this same discovery themselves. They do not know what’s happening out there.

They’re believing their own polls just like they did four years ago. They’re believing this is over. They’re believing that it’s gonna pretty much be a Biden landslide, and then they go out and they talk to people. “Whoa, you’ve got 90,000 autoworkers who didn’t even vote in the presidential election last time.” Who do you think is telling her they’re gonna vote Trump? It’s these people.

People didn’t vote last time; they’re voting Trump. That’s what she’s trying to tell these people at CNN. It’s tight out there. It isn’t over out there. “I’m not sounding the alarm bells like I was four years ago, but it’s competitive.” She is sounding the alarm bells. So I think this is a fascinating little bit of news. This is the kind of information that you’re not gonna see reported in too many places.

But it’s one of these little giveaways. You talk to an actual Democrat in an actual battleground state and you’re getting surprising information. In terms of what the expectations are, I think this is commonplace. It would be happening all over these battleground states if Democrats would do it.