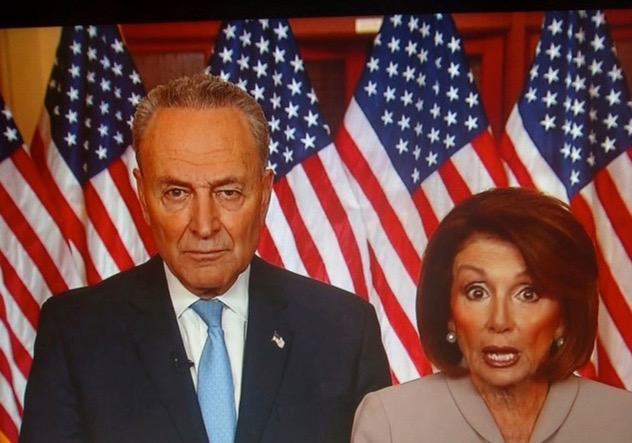 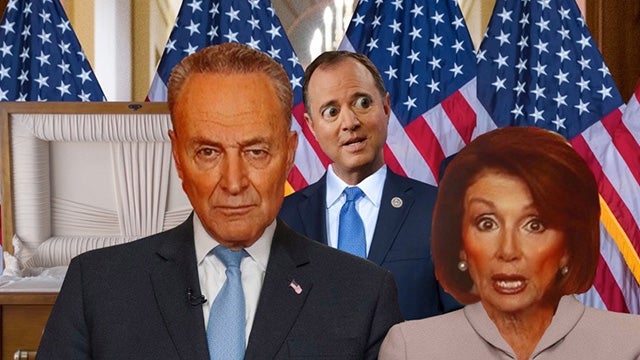 RUSH: For those of you watching on the Dittocam I’m gonna put up a picture here of Chuck and Nancy. And go ahead and switch it up there right now.

If you don’t have the Dittocam, if you don’t have the ability to watch the program, we’ll have this photo published for you at RushLimbaugh.com. Everybody is transposing their faces on that old picture of the farmer and his wife with the pitchfork. And that’s about 30 years old, and I don’t think they look like farmers.

I think these two look like morticians! This is what you see when you walk into the funeral home to make arrangements to bury a dead family member. Look at Schumer there! Look at Pelosi! I’ll tell you what we’re working on, folks. We’re gonna add Adam Schiff, a bug-eyed Adam Schiff to this photo, gonna put some caskets in there because that’s exactly what these two people the look like.

The fact-checks are an embarrassment! They are a hilarious embarrassment. We’re gonna go through some of these fact-checks, which are really not fact-checks because Trump did not make anything up and he didn’t lie about anything. So the fact-checks are just a bunch of journalists presenting their opinions that Trump’s statement, while true, was unnecessarily controversial. It’s garbage like that!

It is clear that these people, Pelosi and Schumer, I mean, when the American people that watched this last night — and I warned you about this yesterday. When you start doing the response to a — and I’m gonna say popular president, I mean, the Democrats that had to respond to Reagan had a hopeless task, and it was illustrated by people like Fort Worthless Jim Wright. It’s just an impossible thing to do.

And these people came off last night as a bunch of elites talking down their noses to everybody that we don’t know what we know, we don’t know what we care about, what we care about is not relevant, they’re running the show, there isn’t any crisis even though both of those people, Schumer and Pelosi, along with Obama and Hillary, have, over the years, advocated for a border wall. They have authorized money for a border wall, much more than Trump is asking. There is blatant hypocrisy all over the place on this.

I loved this last night. Trump was superb last night. He was compassionate. He was on point. He was factually correct. And everything the Democrats and the media complex had set up to blow Trump out of the water bombed and blew up in their faces because there wasn’t a single thing Trump got wrong or made up or lied about that they could make hay about.

In fact, one fact-check from CBS was so embarrassing they had to pull it down. Trump said in his speech last night that one-third of women making the trek in these caravans ends up being raped. Are you ready for the CBS fact-check? The CBS fact-check said, “Oh, no. Trump’s wrong. It’s 60 to 80% of women who are raped!” They made it look even worse than Trump did! And now CBS, you can’t find that fact-check on their website. They’ve pulled it!

So eager, they all thought, like they always do, that they’re 15 times smarter than Trump and all that has to happen is Trump goes on TV then they follow him and they’re gonna make mincemeat of him, and it’s the exact opposite.

RUSH: Is the Pelosi-Schumer photo still up? (interruption) You can take that down. I think the audience wants to see me now. That’s torture to keep that photo up there. Well, it’s actually not torture. It’s hilarious. Again, if you didn’t see it, we’ll have it up at RushLimbaugh.com. I thought that Chuck and Nancy were stiff and robotic.

They had body language and presentation that was just… They didn’t look… They looked nervous. “Thank you, Speaker Pelosi.” “Thank you, Senate Minority Leader Schumer.” I mean, who do they think they’re fooling here? They accuse Trump of being out of touch? They present themselves as stiff and unfeeling after Trump correctly accused them of not caring about human suffering while living behind and hiding behind their own walls.

I thought Trump called them out well. He identified them as uncaring, cold, and stuff, and minutes later Schumer and Pelosi appeared looking and sounding uncaring and cold and stiff. In a visual contrast, it was Trump who came across as an adult who cares. Chuck and Nancy present themselves as robotic and unfeeling — and don’t think the Democrats don’t know it. I don’t care what the Drive-Bys are saying in public, and I don’t care what you’re seeing in the media. These people know that Chuck and Nancy… 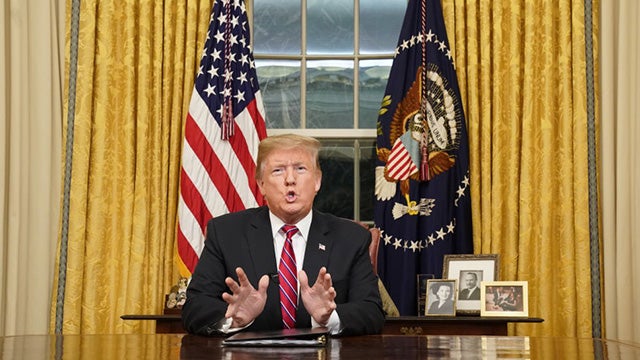 Look, everything blew up on them last night! They were convinced that they were gonna be running live fact-checks, chyron graphics while Trump’s speech was ongoing! And they had nothing to check. They had no facts that were wrong to check, and so they resorted to things that are just embarrassing. As I say, wait ’til you hear some of these. These people, it’s clear they don’t care about rule of law. They don’t care about the “illegal” aspect of illegal immigration.

RUSH: Finally, the graphics department has given me the photo I want. We’re now ready to show it to you on the Dittocam. This is Chuck and Nancy as the morticians greeting the grieving family arriving to make arrangements for the burial of a beloved family member. We’ve added bug-eyed Adam Schiff to this standing next to the casket. We’ve exaggerated the bug-eyed characteristics of Schiff’s eyes, and that’s an exact photo of Chuck and Nancy from last night. 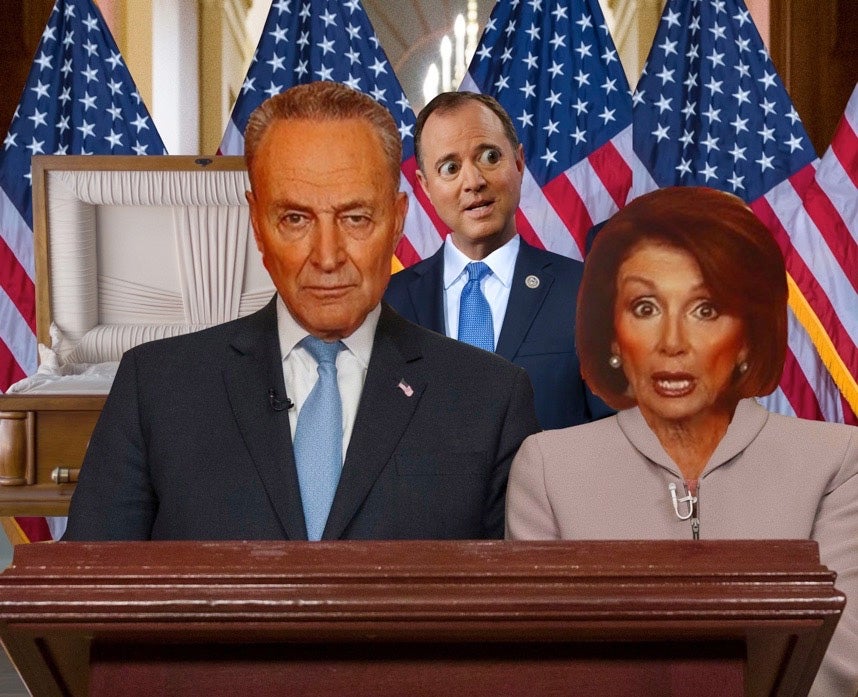 That is how they appeared in their response to President Trump’s national address on the wall. To me, they looked like a couple of undertakers. They looked like the kind of people you’d run into when you walk in the funeral home to pick out a casket. So that’s the graphic that we’ve created. We’re gonna use it on the cover of the upcoming issue, I think. We’re still going back and forth, but probably we’ll use this on the cover of the upcoming issue of The Limbaugh Letter. Oh! Speaking of that, a great interview yesterday afternoon after the program with Charlie Kirk, the founder and director of Turning Point USA.

It’s a conservative young people’s organization, college student organization. He’s 25 years old. You will not believe this guy. This interview… This guy is gonna give you more faith and more hope for the future, not just of conservatives but therefore of the country. There clearly is a changing of the guard. You know, the Never Trumper conservatives are finished. These people that for the longest time considered themselves the deans of conservatism — intellectually, think tankfully, think this or that, cruise attendance and this kind of stuff — are largely the Never Trumpers, and they have been stuck in their time capsule for 25 years.

Speaking of adaptation, they haven’t adapted. They’ve now become these old guys kicking people off the front yard ’cause they’re making too much noise or whatever. It’s amazing. Guys like Charlie Kirk and Candace Owens (who’s part of the organization) are very encouraging element here in terms of the future. I encourage you to get hold of the interview when the next issue of The Limbaugh Letter comes out.