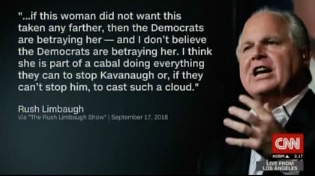 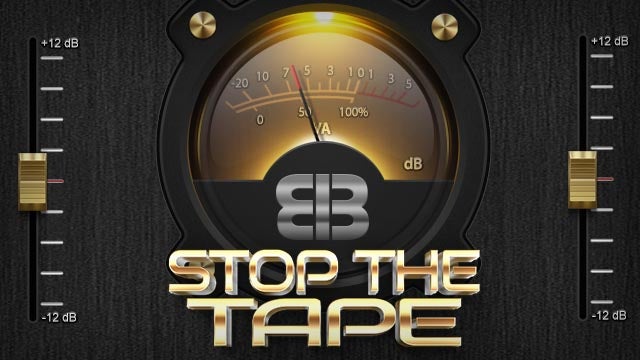 RUSH: Your host was once again savagely attacked on television last night. On CNN International’s Newsroom, they were talking about the allegations against Judge Kavanaugh. The anchor, John Vause, was talking to Democrat strategerist Caroline Heldman.

VAUSE: Here’s how Rush Limbow (sic) put it on Monday on his talk-back (sic) radio show… 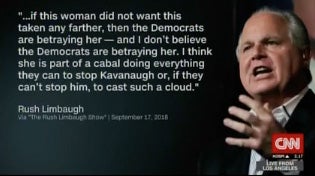 VAUSE: What’s the likelihood that she made it all up?

HELDMAN: The likelihood that she made it up, according to the FBI, general statistics is 2 to 8%. But in her particular case, she’s taken a lie detector test. And of the 65 women who came forward to support Brett Kavanaugh, when Politico went to speak with them, only two of them still backed up their claim that he was a good guy!

HELDMAN: If somebody murders somebody you can find 100 people to say that person’s a good guy. 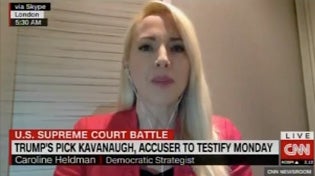 RUSH: Wait a minute! Stop it! That is not true! That is not what happened! (sigh) Here we go again. Okay. So this is Caroline Heldman, and she is a Democrat strategist, and note the way she says that we can trust the allegations. Well, the likelihood that she made it up according to FBI statistics is 2 to 8%. So there’s a 98 to 92% chance that she’s telling the truth, and that’s we on the left need, FBI statistics. And then she launches in: She took a lie detector test.

Yeah, given to her by her lawyer, who’s funded and paid off by George Soros.

“And of the 65 women who came forward to support Brett Kavanaugh, when Politico went to speak with them, only two of them still backed up their claim that he was a good guy!” That’s not true! Only two of them wanted to go public. None of them withdrew their claims about Kavanaugh being upright and a decent guy. None of them changed their minds. They just didn’t want to go public ’cause they don’t want to be part of the circus. Two of them did and they appeared last night on the Fox News Channel.

So they’re just outright lying here about the statistics and the degree to which the accuser may be telling the truth and making up things about the women that are supporting Kavanaugh kind of peeling off now. That number is not 65. It’s 200. There’s a scholar at the Hoover Institution (which is part of the Stanford campus out in Palo Alto) Richard Epstein. He’s a brilliant guy, and he’s written about this.

I want to give you some excerpts of what he has said about this, ’cause I’m sure this is one of those things when you read it, when you hear it, you’re gonna be saying, “Yeah, yeah, yeah! I wish I had said that.” This last-ditch decision to sabotage Kavanaugh at the 11th hour is a disgusting piece of political propaganda. By the way, I’m leaving parts out where he says she’s to be believed and we give her the benefit of the doubt. He’s been totally open and fair-minded about her. But now he gets into the tactics.

“Christine Blasey Ford behaved wholly improperly when she decided to write a letter only to ‘a senior Democratic lawmaker,’ in which she made the most serious allegations of sexual assault against Kavanaugh. At the very least, she ought to have handled matters wholly differently. If she wanted to keep matters confidential, she should have sent that letter to President Trump and to Senator Chuck Grassley…

“She also should have sent it to the FBI for investigation. And she should have done all of these things at the earliest possible moment, in time for a principled and neutral examination to take place before the Senate hearings took place. Then, she should have sat for a cross-examination.” Well, he’s exactly right. She didn’t do any of this. “Putting the information exclusively in the hands of key Democrats thus invited the wholly corrupt strategy that has now unfolded. First, the Democrats would try to discredit Kavanaugh by engaging in a set of procedural antics and obnoxious substantive questions during the hearing, without mentioning this letter. When that strategy abjectly failed, they knew they had to go to Plan B, which was to release the letter and the allegation days before the confirmation vote.

“A perfect sandbag, for the Democrats knew full well that there was no time to respond to them, without causing an enormous delay in the confirmation hearings. Their hope was, and is, to create a huge media circus that would take weeks if not months to sort out. Shipwreck this nomination.” Wave goodbye to Kavanaugh. “Make it impossible for the current Senate to pass on any subsequent nominee before January. Then take control of the Senate and create a stalemate that could run on until the next presidential election.

“And for what? Ford, Kavanaugh’s accuser, maintained a stony silence on these allegations for more than 35 years. At no point did she raise them in connection with the Senate confirmation hearings before Kavanaugh was confirmed in 2006. Kavanaugh has categorically denied the allegations. Late last week, Mark Judge, his alleged accomplice, denounced the allegations as ‘absolutely nuts.’ No other woman has ever made any allegation of this sort against Kavanaugh, and 65 women,” now 200, by the way, “have written an explicit letter in his defense.

“Kavanaugh is right not to respond beyond his categorical denial, knowing full well that further comment would only draw him further into a vortex on which credibility determinations would be unending. And the Senate is right to continue with the confirmation vote” on Thursday, especially if they do not have an acknowledgment from Christine Ford that she’s even gonna show up for this my call hearing on Monday.

Now Chuck Schumer and the Democrats are saying, “Wait a minute. You can’t just do a hearing with her and Kavanaugh. We need all kinds of witnesses! We need Mark Judge in there. We need all kinds of witnesses. You can’t just have her and him in there.” Well, wait a minute, I thought that’s what everybody wanted at first. We’re gonna have her in there and we’re gonna have him in there and we’re gonna make a decision as to who’s telling the truth, right?

Do you realize what a circus that’s gonna be Monday, if this were to actually happen? Do you realize? How many Code Pink people the Democrat senators gonna let in! What kind of an abject, humiliating, embarrassing-for-the-country circus do the Democrats have planned if this hearing on Monday actually happens? This is an abomination, what they’re doing. The destroying the life and career of a great American, sullying and erasing the basic tenets of the United States Constitution. It just pains me that more average Americans are not livid about this, outraged at this, and ready to punish Democrats like they’ve never been punished at the ballot box in November.

RUSH: By the way, does the FBI keep statistics on rape? I’m asking because I didn’t know they investigated that crime. But where does that come from, 2% of…? What is it, only 2% lie, only 2% of women lie? I think that’s statistics from that Susan Brownmiller book. Brownmiller. She wrote the definitive book on rape. It’s not about sex. It’s about power and violence. I forget the name of the book, but I don’t think that’s an FBI stat. Anyway, this Democrat strategist cited it on CNN International last night.