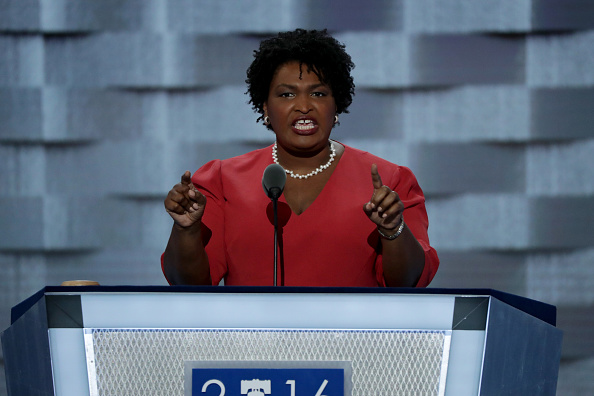 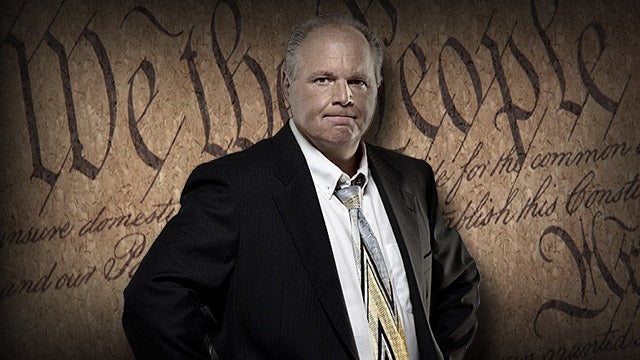 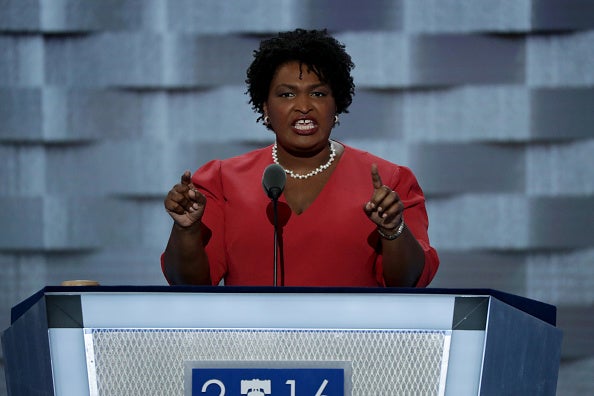 RUSH: So Stacey Abrams in Georgia has conceded, but — well, she hasn’t. She’s ripping Kemp, she’s gonna run again, refusing to really accept the results of the election in formally conceding, just bitter and angry and calling for a boycott.

Hollywood actors are calling for a boycott of the state of Georgia. Georgia has become a major Hollywood production place because they’ve been given tax breaks. And Hollywood actors are claiming they’re gonna start a boycott of Georgia because Stacey Abrams lost an election. This is where we’re headed. It’s not where we’re headed; it’s where we are. They refuse to accept the results of an election. This means the people of the state of Georgia are blanket racists.

Kirsten Powers was on CNN over the weekend, former Fox infobabe, now went over across the lines to CNN, claiming that every white woman, period, not voting for Democrats is, by definition, racist. The whole state of Florida is now racist because Stacey Abrams wasn’t elected governor.

Andrew Gillum unconceded and then reconceded. He lost! He lost on Election Day. He lost before Election Day. He lost in a gooped-up attempt to recount. This is an absolute embarrassment what happened in Palm Beach County and in Broward County in south Florida. It’s no doubt what was being attempted there. And they were unable to steal either of these two elections, the Rick Scott for Senate victory and DeSantis for governor. So Gillum has conceded, then he unconceded, now he’s reconceded. 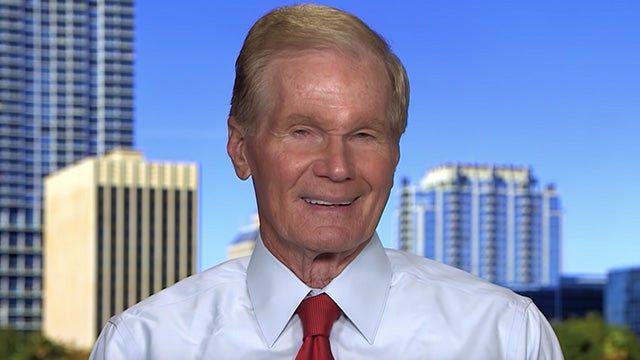 Nelson Smiley Face Staples has conceded as well. And Snipes, Brenda Snipes has resigned. If the Democrats are smart they’ll hire her for overall postelection recount. They’ll make up a whole new division in the Democrat Party, postelection recount division, and she can head it up. None of it was necessary. None of any of that that happened. “What do you mean, Rush? The elections were close, and by law, they had to have recounts.” Yeah. Yeah. But all of it’s so unnecessary. The recounts wouldn’t have happened if there’d been some concessions.

It’s important to note, folks, look I’ve been talking about this for a while now, and I don’t want to overdo it here, but there is very, very bad connotations and future to a political party that will not concede election losses. That sets the table for really acrimonious, unsettling, potentially violent times down the road, you know, losers acknowledging they’ve lost and then taking steps to fix what went wrong has been one of the foundational building blocks of the country.

Adherence to the Constitution, a mere piece of paper, and yet it’s been adhered to with respect and reverence for all of the years of our founding. Some exceptions out there of course, but it wouldn’t have taken much for a single human being, a president, to come along and literally go on TV and tear it up and say it’s no longer applicable and start forging whatever kind of country and government he wanted. We hang by that thin a thread, the reference to the Constitution.

RUSH: Yeah. Eric Holder says about Georgia, “Democracy lost in Georgia.” This is dangerous, dangerous stuff. You had Sherrod Brown last week said, “If this Kemp guy wins, then they stole it. They stole election,” he was saying. The same thing is happening in Florida. These guys practically ran the table. You know there’s not a single Republican member of Congress from Orange County, California? They’ve lost everything. The Republicans are as tiny a factor in California as they have ever been. I mean, not a single seat out of Orange County.

The margins here in Florida were very close, but they were no different after the recount than on election night, despite the efforts. There was even somebody in Florida, I think it was Broward County — I’ll have the details coming up — during the recount, the ballot counting was going too fast. The machines were going too fast. So somebody stuck a paper clip in the power button to try to short-circuit it and slow it down. (laughing) To slow it down! I mean, the most incredible things were happening.

We interviewed him here — which was, of course, instrumental in his victory. We interviewed him and he requested a diploma that he could hang on his official governor’s wall in Tallahassee, and I’ve never had a request for one. He’s not talking honorary. He wants the real deal. So we’re contemplating that, since Andrew Gillum has re-conceded. After conceding and then unconceding, he’s re-conceded, and he’s admitted that he lost. In fact, let’s listen to some of this. Here’s Stacey Abrams. This is an angry woman.

I think this is an angry woman during the campaign. This is an angry woman before the election. I think the left’s natural state of mind is angry, outraged. It’s certainly not true that they’re happy. The left is not made up of happy people or even content people. The left’s main preoccupation each day is outrage and anger, and they use it to bully and to intimate — and when that doesn’t work, do they steam! Oh, do they get mad! So Stacey Abrams thinks that she was illegitimately defeated for governor of Georgia and she’s not gonna accept the outcome. 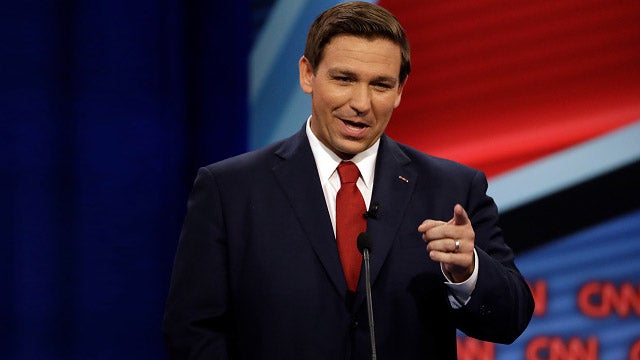 Because they’ve given Hollywood tax breaks just like New York gave Amazon tax breaks, just like Canada gives Hollywood tax breaks. So if there’s a boycott of Georgia, if it ever amounts to anything, you people in Georgia ought to support it. You’re getting hosed! You’re being forced to pay whatever tax rate you’re paying while these Hollywood types are given all kinds of tax breaks to come in and produce whatever it is they’re producing! Anyway, here is Stacey Abrams, defiant in Atlanta. This is on Friday at a press conference to deliver her non-concession speech…

ABRAMS: You see, I’m supposed to say nice things and accept my fate. They will complain that I should not use this moment to recap what was done wrong or to demand a remedy. You see, as a leader I should be stoic in my outrage and silent in my rebuke. But stoicism is a luxury and silence is a weapon for those who would quiet the voices of the people and I will not concede because the erosion of our democracy is not right.

RUSH: Exactly right, and the proof of “the erosion of our democracy” is that she lost. Why, she even had Oprah! The Oprah went in there, and she still lost! Which proves that Georgia is what? A racist state and undemocratic to boot. If you lose as a large African-American woman and you’re being endorsed by another large African-American woman, then there has to be some sexism and racism going on.

And, by God, we’re not gonna concede to this flouting of democracy. Here is more of Stacey Abrams. She was on State of the Union Sunday morning on CNN. Jake Tapper was talking to her. And he said to her, “Sherrod Brown,” the Senator in Ohio, “says the election was stolen. Do you agree that your election was stolen, and do you think that Brian Kemp is not the legitimate governor-elect of Georgia?”

ABRAMS: The law as it stands says that he received an adequate number of votes to become the governor of Georgia.

TAPPER: Is he the legitimate governor-elect of Georgia?

ABRAMS: He is the person who won an adequate number of votes —

TAPPER: But that’s not —

ABRAMS: — to become the governor.

TAPPER: You’re not answering the question.

ABRAMS: I am an… (sputters)

TAPPER: Do you think it was —

TAPPER: You’re not using the word “legitimate.” Is he the legitimate governor-elect of Georgia?

ABRAMS: He is the legal governor of Georgia.

Why is what she thinks the news? Why is what the left thinks of everything the news? Why is the impact good or bad on the Democrats always the focal point of the narrative? Why? Why is it that when the Democrats lose, there’s something weird or odd about it, and when the Republicans win there’s something fishy about it? Why is this? Inquiring minds want to know. Here’s Staple Face, smiley Bill Nelson on his campaign website posting a video conceding the race to Rick Scott. This is the senator race…

NELSON: Things worked out a little differently than Grace and I had hoped. But let me say I by no measure feel defeated. And that’s because I’ve had the privilege of serving the people of Florida and our country for most of my life. I was not victorious in this race, but I still wish to strongly reaffirm the cause for which we fought.

RUSH: Well, okay, it’s a little better. He’s acknowledging that he didn’t win, and he’s not categorizing it as illegitimate. It’s still not right, but they gave it their best shot. They gave the recount their best shot, they put their best people on it: Brenda Snipes, Susan Bucher. They put their best experts they had on it, and they couldn’t flip it, so it must be legitimate. Here is Andrew Gillum. This is Saturday in Tallahassee.

GILLUM: We said that we will fight until the last vote, uh, is counted. We wanted to make sure that every single vote — including those that were overvotes, undervotes. Uh, as long as it was a legally cast vote, we wanted those votes to be counted, and now that we are rounding that process out, R. Jai and I wanted to take a moment, uh, to congratulate Mr. DeSantis on becoming the next governor of the great state of Florida. 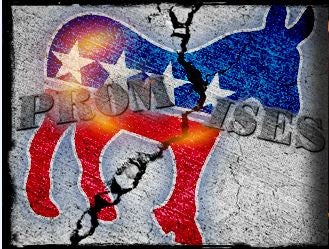 RUSH: Now, there you go. There’s a little grace there. That’s what used to always get praised. That’s what was always acknowledged as the way to go. No harm there. Gillum didn’t hurt his chances. Maybe some of the radicals on the left think he was being too nice, but that’s the way it used to go. Here’s Rick Scott this morning on Fox & Friends and on the Fox News Channel. Steve Doocy said, “Congratulations. Did you at any point think that they might find a bunch of ballots in a book room somewhere and that the other guy who has the job,” i.e., Smiley Staple Face Nelson “was gonna keep it?”

SCOTT: It was very frustrated. When I announced we’d won that Tuesday night, we were up 57,000 votes, and they just kept finding ballots. And so that’s why, you know, I’m thank full for a lot of people that brought light to this to make sure we stop this and we’re gonna do everything we can to make sure these elections are free and fair.

DESANTIS: And so, you know, we had a margin on election night. It was a close race, but it was definitive that I had won. And even with some of the votes that turned up in Broward, I mean, my margin was significant enough. We knew the machine recount was not gonna change it and it didn’t. And I also had confidence that Governor Scott would end up winning the recount, both the manual and machine recount there. So I think that’s great that it happened and that we’re moving on now.