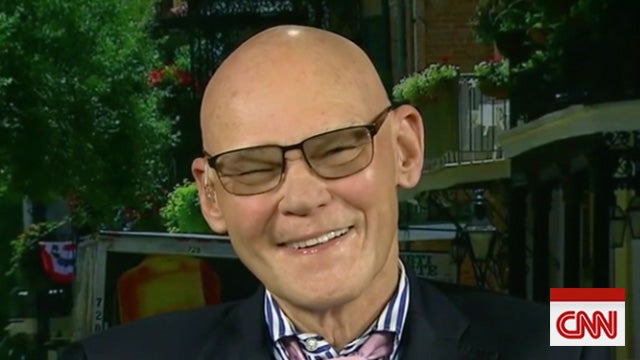 RUSH: I’m gonna weigh in on Susan Collins here in a second. Her speech on Friday was… I don’t think it was the turning point. Folks, I don’t think the vote’s any different than it would have turned out if Blasey Ford hadn’t shown up, if DiFi hadn’t leaked all that. If all of that had not happened, the vote would have been the same, 50-48. I firmly believe that. This is not to be critical of Susan Collins. Quite the contrary. The turning point was Trump explaining to the nation that Blasey Ford could not back up or corroborate her story!

Blasey Ford got away with being “credible,” as far as the hearings were concerned. Only when Trump unloaded and told America during his rally that she can’t tell anybody where it happened, when it happened, what year it happened, where the house was, how she got home, what she said after it happened to whoever. None of it! The people that she said were there? All four denied it. The American people didn’t know that. The Drive-Bys didn’t report it. Trump was the turning point. Trump enabled Republican senators to hang tough.

Here is Mac in Allentown Pennsylvania as we head back to the phones. Greetings, sir. Great to have you with us. 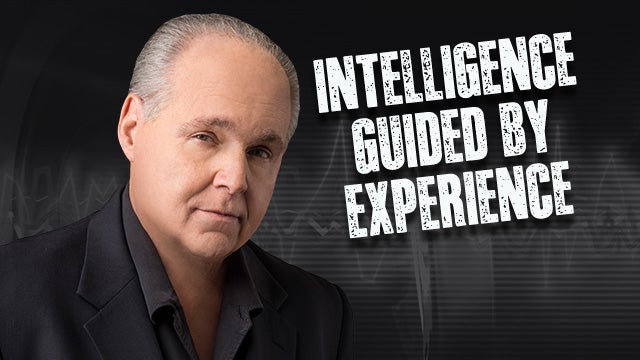 CALLER: Oh, wonderful to hear from you, Rush. I’m a listener from the earliest days, and I’ll make a comment quick about the Democrats and the whole process with this hearing. And then, if you have time, I’ll tell you how you converted my wife from non-listener to one of your most loyal fans, which is a crazy story. But, anyway, with the Kavanaugh hearings, what’s so sinister and ironic in all this is if you remember back to Bill Clinton and the accusations that came out against him in the early days — not that early.

But all the accusations with him — the media, Saturday Night Live, every talk show, the news outlets — they totally destroyed these women. They made fun of their looks. They made fun of their weight. They mocked their stories. They discredited ’em. They questioned their motives. Unlike Dr. Ford, where you have someone that doesn’t remember anything, you had victims that remembered — in particular Juanita Broaddrick — the time, the place, the who, what, where, when, with witnesses.

The irony is so disgusting — and there’s no political motive with Bill Clinton’s victims because they were members of his own party! And that’s the sickness of all this. And I think senators in this whole process now have the perfect weapon to use — and I hate to call is it a “weapon.” But the perfect reality slap is to bring this up and call it out. I mean, Pelosi, Schumer, Durbin, any number of them wouldn’t even take a call from Juanita Broaddrick, a member of their own party.

RUSH: Yeah, but, see, they had their chance to do that and they didn’t want to go there, because they couldn’t take the risk of offending people who believed Blasey. But the fact of the matter is — and I will say it again — the Democrats don’t care about sexual assault, as evidenced by your recitation of the facts of what happened to women who accused Bill Clinton. They were destroyed, and Hillary Clinton ran the unit that did the destroying! It was called the “bimbo eruptions unit.” It was Hillary and Betsey Wright. 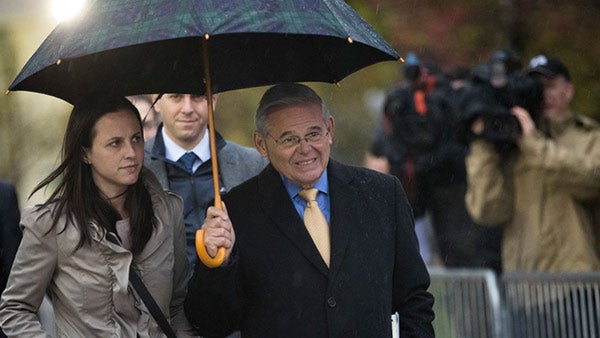 Bob Menendez — Democrat senator with a 10-point reelection lead in New Jersey — was caught running around with one of his donors in the Dominican with underage women. He narrowly escaped conviction and a trial over campaign contributions. Democrats don’t care about this! This was just a vehicle. It was just a Hail Mary. It was an October Surprise. You name it. It was just the vehicle. They had tried it with Clarence Thomas, Anita Hill. They got close; so they wanted to relive history and try this again.

I don’t think any of it was real. You look at the Democrat activists that were involved with Blasey Ford. I think the whole thing was strategized. Now, it’s interesting you bring up the Clintons. Grab audio sound bites 10 and 11. Saturday. Michael Smerconish has a show on CNN. His guest was James Carville. Now, James Carville is the guy, in discussing Paula Jones during the Clinton years… Paula Jones sued Clinton for a number of things, and that’s where Clinton got in trouble by suborning perjury and lying under oath in grand jury testimony.

He lost his law license for a year. It was James Carville that said (impression), “Drag a dollar bill through a trailer park and you never know what you’re gonna get. Here we have Paula Jones! You drag a dollar bill through a trail park and that…” (interruption) Was it a hundred-dollar bill or dollar bill? (interruption) A hundred-dollar bill. All right. Well, anyway, Carville is still proud of the remark. Here’s the question: “Would it have been better for the GOP if Kavanaugh had failed, because then the base would be so mad; so ticked off they’d all come out to vote in November?”

CARVILLE: You know, that’s the money question, and I just found myself today for the Democrats, Kavanaugh is worth a lot more alive than dead. This is not gonna go away. They’re not gonna stop doing stories on Kavanaugh. They’re can… You know, they’re gonna keep him front and center. He’s not gonna go away. And had they defeated him, they would have just picked someone equally as right wing as Kavanaugh and have rammed him through in a lame-duck session. I think today’s result is probably as good as you can hope for. Kavanaugh is gonna be an issue in 2018. He’s gonna be an issue in 2020. The Democrats are gonna keep digging up stuff. The press is not gonna stop all the things that they’re working on about Kavanaugh. 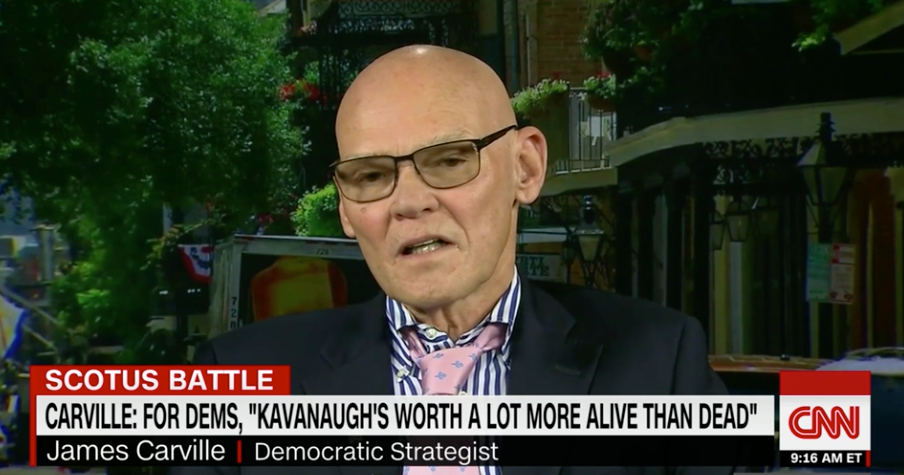 RUSH: Well, it sure sounds to me like there’s a coordinated effort to continue destroying Kavanaugh. And here’s Carville (impression), “That’s the best thing we could have hoped for! Best thing is to have that guy on a court and keep looking into the guy! If he’s up there on the court we can just keep lookin’ into the guy, and everybody gonna do it! They’d just ram somebody else in there! If Kavanaugh had been beaten, they’d just ram somebody else in lame-duck session we wouldn’t know what hit us.” And then Smerconish says, “Lindsey Graham dusted off one of your lines from the old days: ‘Drag a hundred-dollar bill through a trailer park.’ What were you thinking when you heard him doing that?”

CARVILLE: (chuckling) You know, I said a lot of things in my life (chuckling) as a joke! Was cracking a joke it was actually about Gennifer Flowers, and I don’t think that Dr. Blasey Ford strikes me as a kind of little bit of different — little bit of a different deal here, you know? But always… I’m always complimented when people use my lines.

Here is Jeff in Houston, Texas. Great to have you, sir. Hi.

CALLER: Brett Kavanaugh. Only two options. He’s either innocent or his guilty, and if he’s guilty and that’s true, Democrats offered one of the most incompetent, bumbling prosecutions in any case in American history. Now the Dems are gonna have to go to their graves knowing they’re responsible for putting a sex-offending criminal to the Supreme Court. (chuckles)

RUSH: (chuckles) Is that how you want to look at it?

RUSH: Ha! If he’s guilty, the Democrats botched the prosecution and because of the Democrats we’ve got another pervert on the court. Is that…? That’s how you want to sell this?

CALLER: That’s the only two options I see, Rush.

RUSH: Well, either he did or didn’t do it, and either she is lying or he is.

RUSH: Well, wait a minute now. You put in those stark terms. Do you realize nothing has been resolved? Do you realize nothing has been resolved? We still don’t know. The preponderance of the evidence — I should say, the lack of any — pretty much exonerates the judge. But there was not any official conclusion to this, and maybe there couldn’t be. But if she lied… You put it in terms of, “If he lied, the Democrats botched the prosecution and he’s on the court.”

If she lied, then she has committed perjury under oath before the Senate Judiciary Committee. Her lawyers have aided and abetted that. I mean, some real serious crimes have occurred if she is lying. It’s already been detailed, the vulnerabilities he faces if he lied. But nobody’s talked about what she would face if it were found that she had lied — and it’s bad. Perjury? I mean, this woman would be facing jail time. Her lawyers aiding and abetting. All of the Democrats involved in leaking her testimony.

The fact that she… Do you find it strange, in that light, that she can’t tell anybody where, when, who was there? She can’t tell a soul when it happens, where it happened, where the house was, which house it was. She can remember one thing about that day: She had a beer. You’ve got her lawyer spreading this whole tale. She will not give up the therapist notes. She will not provide all of the details from her lie-detector test. There’s a reason, I think, that Blasey didn’t provide any specifics.