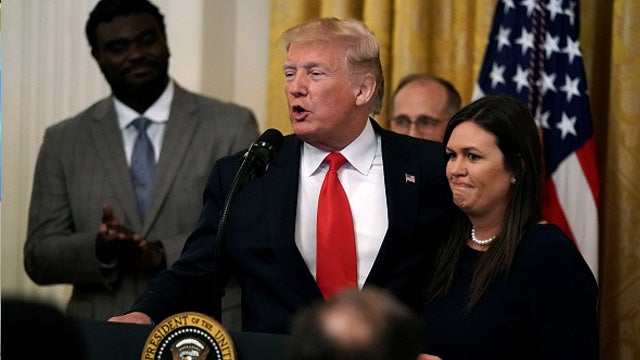 RUSH: Sarah Sanders announced she’s leaving. She’s going back to Arkansas. Speculation is she might run for office someday. I love Sarah Sanders, love the work she does. I love the job she does. She is perfect for that job.

One of the best things that Sarah Sanders has done, aside from her daily conduct of the job, one of the best things she’s done is end and eliminate the daily White House press briefing, because you know what that became under Trump? It wasn’t a press briefing. Trump doesn’t need a press briefing. Trump is his own press secretary, his own communications director. He doesn’t need a press secretary doing a briefing as a conduit to the American people.

He talks to the media more than any president we’ve had in our lifetimes. He seeks ’em out. He’ll say anything to them. He’ll sit there and answer questions for 45 minutes on the way to the helicopter. The White House press briefing became an audition for various members of the Drive-By Media to make fools of themselves in order to stand out and get noticed. Exhibit A: Jim Acosta of CNN. It was just an opportunity to humiliate, embarrass, misbehave.

You know, that’s another thing.

All of these people say, “Trump’s behavior is simply unacceptable to those of us in the Washington establishment! It’s a betrayal of our values.” Well, what the hell would you describe the media’s behavior every day toward Trump or toward Sarah Sanders as? Is that representative of Washington values? Here is a montage we put together of the American Drive-By Media, a sexist hate group. Sarah Sanders has had to endure this bunch of people because of the hatred they have for Donald Trump.

ERIN BURNETT: (dramatic music) Trump’s most loyal defender, Sarah Sanders, is leaving. (pause) Can she get her credibility back?

JIM ACOSTA: (outdoor noise) She fell short of her duty to the American people.

PAULA REID: (voice over) The White House briefing effectively died on her watch.

PAMELA BROWN: (outdoor noise) … accused of not being truthful.

MATT MILLER: I hope that she’s not able to escape this White House without, kind of, the shame and stigma following her.

ANDERSON COOPER: Who gets out of the Trump White House alive — you know, with their reputation intact? (Snort!)

AMANDA CARPENTER: She’s been exposed for the fraud that she is.

JOE LOCKHART: … failure on the most important parts of the job, as a liar.

NICOLLE WALLACE: She was a liar. It’s in the Mueller report.

DAVID GERGEN: Sarah Sanders has opened the door to massive amount of lying.

RUSH: “Lied, lied, lied…” You, you will not find that kind of reaction to an outgoing White House press secretary anywhere else ever. Not a single one. Even Amanda Carpenter, who was Ted Cruz’s (I don’t know) campaign strategist, campaign manager, media person. Amanda Carpenter is now at CNN. She’s the one that said, “She’s been exposed for the fraud that she is.” Joe Lockhart: “[F]ailure on the most important parts of the job, as a liar.”

Nicolle Wallace from the George W. Bush communication shop: “She was a liar. It’s in the Mueller report.” David Gergen: “Sarah Sanders has opened the door to massive amount of lying.” Here’s the president late yesterday afternoon during an event promoting a new initiative on second chance hiring for former inmates, and he talked about Sarah Sanders.

THE PRESIDENT: She’s done an incredible job. We’ve been through a lot together. And she’s tough, but she’s good. You know, you also have tough and bad, right?

THE PRESIDENT: That was a state I won by a lot, so I like it. Right?

THE PRESIDENT: But we love Arkansas, and she’s going back to Arkansas with her great family — her husband, who’s a fantastic guy — and I don’t know, Phil and folks, if we can get her to run for the governor of Arkansas, I think she’ll do very well —

THE PRESIDENT: — and I’m trying to get her to do that.

RUSH: She was exceptional at this job. She was a pit bull in their faces, had answers, and made them look like the children they are. She had this unique talent to make them look bad. She didn’t cower. She didn’t play the game.