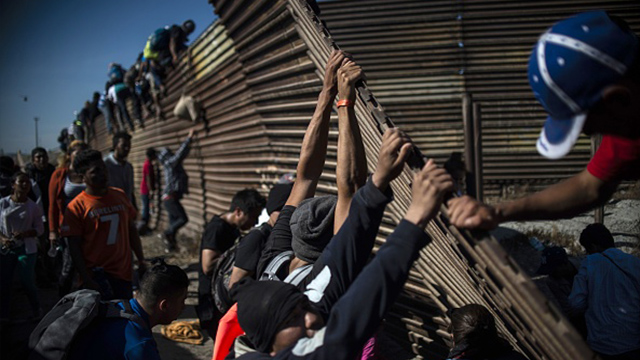 RUSH: There was a major faux pas that occurred on PMSNBC last night. They were having a discussion on the arrival of the caravan, Tijuana and the border. And of course the popular impression that’s being left is it’s a bunch of women, displaced mothers and their children are being tear gassed, Trump is tear gassing them! This is the general picture being painted.

Last night some people screwed up by admitting that the majority of the people in the caravan are men, 20-year-old men, and some of them are grabbing babies out of the caravan and moving to the front because they realize if there’s a child in tow that it changes everything.

Also, that photograph that was taken of the mother, who, by the way, looked a little heavy to me after having walked 1,500 miles with two kids. Now, normally I wouldn’t talk about this. But they’re asking us to believe a lot of things. Here’s this woman, she’s a plus size. Let’s just put it that way. She’s got two kids in tow, and they tried to tell us that this woman has been sweating and slaving and starving, dying of hunger and thirst on the way, thousands of miles from Ecuador. She didn’t look like she had just finished a multi-hundred or thousand-mile trek.

Anyway, that picture was cropped. The actual real photo shows four or five other poses taking place within that single frame on both sides of the water. There are so many photographers taking pictures in that frame. And that cropped photo then was used all over newspapers in America yesterday morning. But the bag was kind of opened up inadvertently, these MSNBC people admitting that most of the people in the caravan are men.