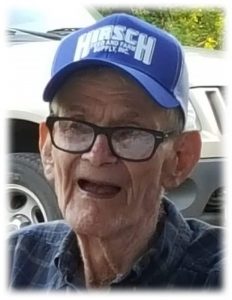 He was born the son of the late John Henry Barnett and Addie Laura Kelly Barnett, on April 24, 1923 in Moko, Arkansas and died July 11, 2018 in West Plains, Missouri.

He was united in marriage March 6, 1945 in Moko, Arkansas to Alene Haslett Barnett, who preceded him in death.

He was preceded in death by his wife; his parents; four brothers, Otto, Bob, Aulcie and Jewell, and four sisters, Tressie, Otilla, Ruby, and Betty.

He attended the 160 Church of Christ in West Plains, Missouri. He was an avid coon hunter, with memberships being with the Lanton and Moody Coon Clubs. He loved to farm. His favorite two things were watching dirt turn over from a plow and hay falling when you are cutting it.

Memorial contributions may be made to the Fair Haven Children’s Home and can be left at the funeral home.

Burial will be in State Line Cemetery, Fulton County, Arkansas, under the direction of Carter Funeral Home, Inc., West Plains.