RUSH: I mentioned mere moments ago, ladies and gentlemen, that there is polling data out there now that is just… if it hasn’t happened yet: “Democrats hit the panic button after internal polling shows stunning public opinion on impeachment.” Are you ready? This is from Glenn Beck’s website, TheBlaze.com. And here is the pull quote.

“He claims that other freshman Democrats agree with him that the agenda of the party does not match the voters’ concerns. And their internal polling supports that opinion.” I don’t know who the “he” is. Doesn’t matter. What matters here is the internal, not ABC, CBS, NBC polling data. This is internal Democrat Party polling data.

It’s a Democrat Party internal poll. Ninety percent think the Democrats are way off and on the wrong track. See, this is why they’re gonna be hitting the panic button, not just because of what it says on the surface, but why are they doing this impeachment business? There are two reasons. It’s actually a combination of two.

None of it has happened! Trump is still there! Trump is still president! He’s in California raising money! He’s right in their faces raising money. He’s implementing his agenda. They’re beside themselves. They are telling the Democrats, “You better! You better do what you said you were gonna do. You better get rid of this guy.” So the Democrats, Nadler and this crew, are listening to this base. They think — this is the key — they think that their base is a majority of people in this country.

So it’s a combination of things. It’s a combination that Democrats like Nadler and Steve Cohen and Pelosi, the rest of these people really, really hate Trump. They are frustrated all the get out they can’t get rid of him. They want to get rid of him, they hate him. And then the other factor is that they think — their base is demanding this, too — they think over half the country’s demanding this.

This is the delusion in which they live. They believe over half the country wants Trump gone and has ever since Trump won. Now their own internal polling shows that 90% of the American people think the Democrats are going down the wrong road. That’s not an insignificant number. Ninety percent, folks, and 54% think the Democrats are more focused on impeachment than anything, including climate change.

Democrats have also been frustrated by a lack of clarity on just what part of the impeachment process they have begun. They haven’t even really begun. You see, they’re trying to make these loco weeds think that they’re impeaching, and they aren’t. They haven’t literally officially started it. They just want everybody to think so. And part of that was bringing Lewandowski in yesterday. And they were gonna score big time, they were gonna embarrass and humiliate Lewandowski. 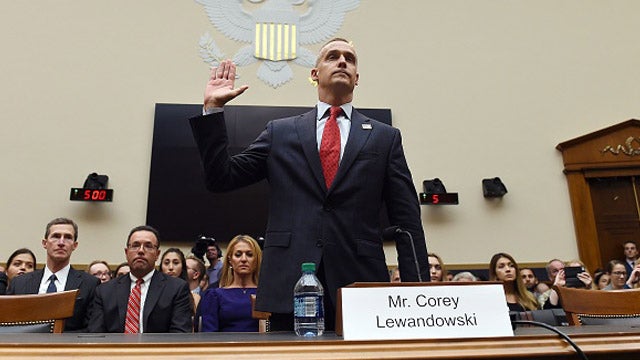 Lewandowski was gonna open a doorway to help them get to Trump, and Lewandowski smoked them by acting so dispassionate, so disinterested. It was classic. The last thing Lewandowski was was intimidated by any of them. So now the Democrats and the media are ripping the Democrats on Capitol Hill to shreds for being incompetent.

Now, there’s another factor here. And we see that factor in this really embarrassing destructive effort by the New York Times to get rid of Kavanaugh.

RUSH: Here is Tom in Toms River, New Jersey. Great to have you, sir. Glad you waited. Hello.

CALLER: Thank you, Rush. I’m a 30-year listener and student of the Limbaugh Institute for Advanced Conservative Studies.

CALLER: I wanted to say that I believe Twitter is helping the Democrats commit suicide. They’re pushing Nadler to keep pushing the impeachment hearings, and they’re also giving the ability of the Democratic candidates for president to believe that people are actually in favor of all the socialist policies that they’re advocating, and they’re now free to say it. While I think Twitter… You know, they’re thinking that 30,000 people commenting on something represents the majority of the United States, and that’s not the case.

RUSH: You know, I think there is a lot of truth to this. I have myself opined on elements of this. I think Twitter is destroying journalism. Now, I know some of you say (impression), “Rush, journalism isn’t being destroyed. Those people are still as corrupt and they’re still doin’ as much damage.” I agree. I understand. But strictly from an objective standpoint of defining journalism and what it is, it is vanishing. Now, one of the tropes about journalism — one of the jokes — is that journalists have always been lazy, that the number one source for journalists was a fax machine.

The reason is ’cause there’s partial truth to it. How do you think something like that Center for Science in the Public Interest…? Which is two anorexics. The Center for Science in the Public Interest is two people, and if you saw a picture of ’em, you’d think that they’re dead and just walking around alive. These are the people that convinced the media that popcorn popped in coconut oil would kill you, that monosodium glutamate would kill you!

They tried get Chinese food banned. It’s two people wearing white lab coats with a fax machine and a logo, and they start mass faxing journalists. And because they are leftists and because they want to control what people eat and do, the media glommed right on to ’em. One of these clowns’ names is Michael Jacobson. These people run around… They’re not authorities on anything, but they were made so by the media.

And then people (like I was talking earlier) said, “Well, the media is talking to them. They must be experts.” No. They’re frauds. They’re activists, like everybody else in media is — like everybody else in journalism is. So Twitter has become the substitute for media actually going out and talking to people. The most dreaded words I see when I’m doing show prep is a variation of, “The internet blew up” or “X and such-and-such went viral,” or “Twitter went bonkers.” Who cares!

What is Twitter? It’s nothing but a bunch of anonymous people. But if the media can find a bunch of anonymous people — they have no idea who they are — who happened to be tweeting things the media agrees with, then what happens? The media reprints the tweets! And uses them as a substitute for majority public opinion. Now, Tom’s point here is that they’re only fooling themselves because Twitter is not majority public opinion.

Twitter is a haven for outcasts, people with inferiority complexes, people with… I mean, there’s exceptions, obviously. The top, trending hashtag on Twitter at this very moment is #LiarLewandowski. So the media’s looking at this and saying, “Oh, wow! Look! Most Americans think Lewandowski’s a” whatever, and it just takes ’em in the wrong direction.