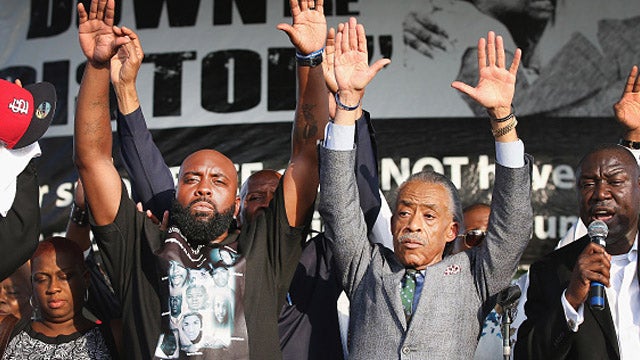 RUSH: Today’s the fifth anniversary of something. Like, yesterday was 8/8, Heil Hitler Day, according to that former FBI assistant director. I wonder, do I have that on the sound bite roster today? I know we have the wackos from the socialist conversation, but I don’t know if I’ve got this FBI guy. Let me just check real quick here. I don’t think so. Anyway, he said that Trump was flying the flags at half-mast through August 8th, which is 8/8, and 8 stands for the letter H.

Anyway, the anniversary five years ago today, something happened. You know what it is? Oh, was a young teenager was walking down the street in Missouri pondering his first year at college after having robbed a convenience store, Ferguson, Missouri. That’s exactly right, Mr. Snerdley.

No. Let me tell you what happened. In fact, this is a damn good reminder. You know what was the outgrowth of Ferguson, the real outgrowth of it? Obama and Eric Holder use the riots in places like Ferguson and Baltimore to get consent decrees that put the DOJ in charge of more than 30 local police departments. Thirty! Thirty city police departments were taken over by the Department of Justice under Obama by virtue of these consent decrees.

They had to sign them — from Oakland California to Ferguson to Baltimore, Detroit — and just look. Has it done any good? Five years ago.

RUSH: I went back to the Grooveyard of Forgotten sound bites. You gotta hear this if you missed this. Earlier in the week, it was Monday night on PMSNBC, Brian Williams was hosting the former – I’m not making this up — FBI assistant director. This guy is in the upper executive echelon at some point. Don’t know when he was the former FBI assistant director. His name is Frank Figliuzzi. And this is what he said about Trump and the white supremacy, white nationalist, white racism, bigotry, racism, sexism, homophobe movement.

FIGLIUZZI: The president said that we will fly our flags at half-mast until August 8th. (pause) That’s 8/8! Now, I’m not gonna imply that he did this deliberately, but I am using it as an example of the ignorance of the adversary that’s being demonstrated by the White House. The numbers 88 are very significant in neo-Nazi and white supremacy movement. Why? Because the letter H is the eighth letter of the alphabet, and to them the numbers 88 together stand for “Heil Hitler!” So we’re gonna be raising the flag back up at dusk on 8/8.

RUSH: Okay. So why does 88 meaning HH, why does it stand for Heil Hitler? Why can’t it be hell, yes, or something? Why does it have to be Heil Hitler? Now, look at what this guy is saying. “I am not going to imply that Trump did this deliberately.” Okay, then you should stop, Mr. Figliuzzi. “I’m not gonna imply Trump did this deliberately, but, I am using it as an example of the ignorance of the adversary that’s demonstrated by the White House.

So I think using my highly developed communication skills and my ability to read the stitches on a fastball, I think what this Looney Tune FBI guy is saying is that he’s not accusing Trump of anything. He’s saying Trump is ignorant of the Heil Hitler movement out there. And he is unknowingly, inadvertently signaling them by raising the flag to half-staff on August 8th, 8/8.

Now, folks, this is scary. This guy was a former assistant director. This is the kind of guy that’s gonna be back in power at the FBI once the Democrats, if the Democrats win the White House back again.