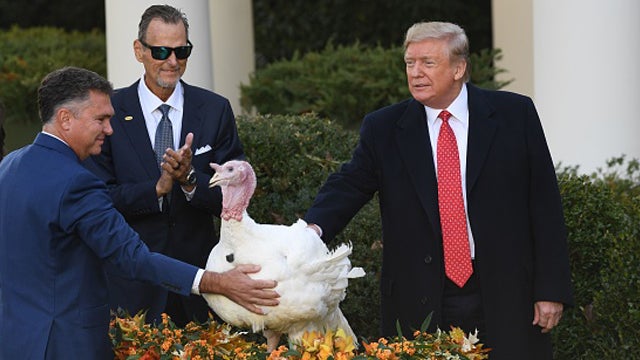 RUSH: Did you see Trump’s rally down in Sunrise, Florida, last night? Can I just tell you, I think Donald Trump is having the time of his life. I think he’s just eating this up. Did you hear what he happened to say when he pardoned the turkeys yesterday? You didn’t hear it? Well, you know, I had the sound bite. I didn’t get to it. (interruption) You’ve got the sound bite? We got it. I was gonna read the transcript. Listen. This is Trump pardoning the two Thanksgiving turkeys. Bread and Butter are the turkeys’ names. This is how he did it.

THE PRESIDENT: Bread and Butter have been specially raised to remain calm under any condition, which will be very important because they’ve already received subpoenas to appear in Adam Schiff’s basement on Thursday.

THE PRESIDENT: Hundreds of people have. It seems the Democrats are accusing me of being too soft on turkey. But Bread and Butter, I should note that, unlike previous witnesses, you and I have actually met. It’s very unusual. Very unusual.

THE PRESIDENT: In any event, I expect this pardon will be very popular with the media. After all, turkeys are closely related to vultures. I don’t know if I like that line, but there is a little truth to it.” 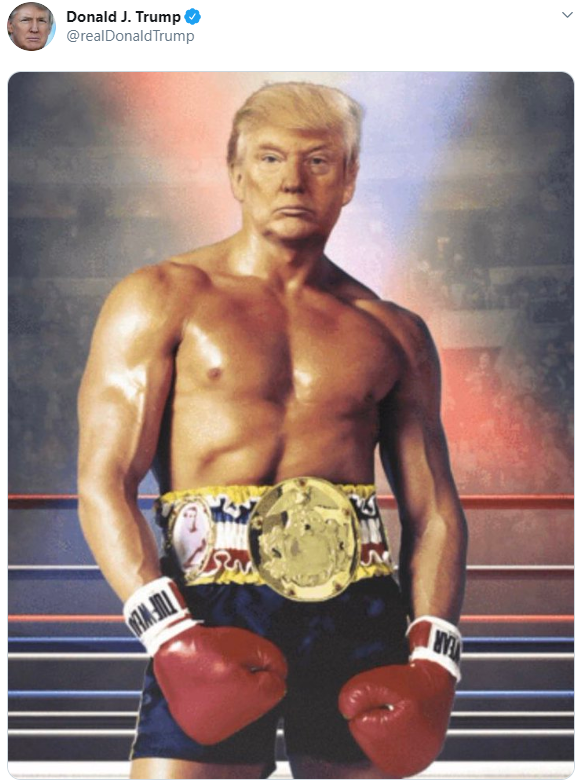 RUSH: I don’t know if I like — anyway, he’s having the time of his life. He’s down there at the rally in Sunrise last night, he’s throwing out Make America Great Again hats, you got 21,000 people inside, 3,000 people outside in Broward County where Hillary won 60% of the vote in 2016. In Broward County. He was on fire last night. Vice President Pence introduced him.

Today he’s posting on Twitter Photoshopped pictures of his face on Rocky’s body to show that he’s just pummeling the Democrats into submission. You just have to know, he’s created economic records that no one will ever surpass any time soon on the economy. Whether it’s impeachment, the Democrats, Pencil Neck, these are all just tiny little acne pimples and zits that are harassing him, and he’s having fun toying with them.

I really do think, because you can’t fake this. You know, stress is a real thing, and stress affects everybody. And one of the impacts of stress is that you can see it, and he just doesn’t exude being under any stress whatsoever. And I think one of the reasons for it is that he knows there’s not a scintilla, there’s not a shred from the very beginning of this with the Russia collusion business, there isn’t a shred of evidence. There isn’t a shred. All of this has been an exercise in futility.

You look at the indicators out there. And even the left and the media, they’re not able to hide their shocking disappointment that this massive effort, first with Russia collusion and then Kavanaugh, now Ukraine, they are frustrated to all get out they have failed. And particularly the media. The media back in the days of their monopoly, pre-1988, could get rid of anybody they wanted to.

It might have taken them two or three years to get rid of Nixon and it might have taken them seven years to finally get George Bush’s approval numbers down to the thirties. But they were able nevertheless to do it. They can’t now. There’s no way that you can say the media has succeeded. Trump is still in office, and Trump is having a grand time. Trump is living the life. Trump is living the dream. He’s having fun with these people.

I don’t mean to say that he prefers this over not having to deal with this. But at the end of the day they haven’t really laid a glove on him. He’s still able to implement his agenda. His agenda is still working great. They haven’t been able to stop him in any which way they’ve tried. And they haven’t really admitted that until now. And these headlines today are kind of an indication that they’re the ones feeling despondent.