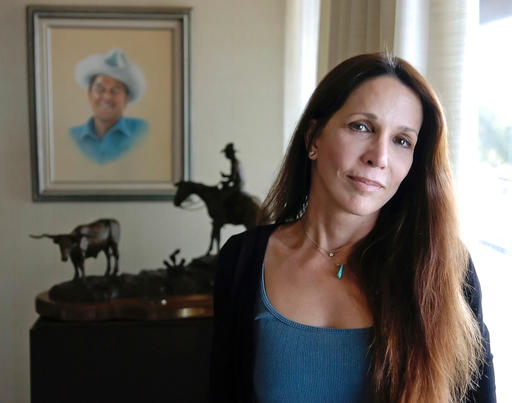 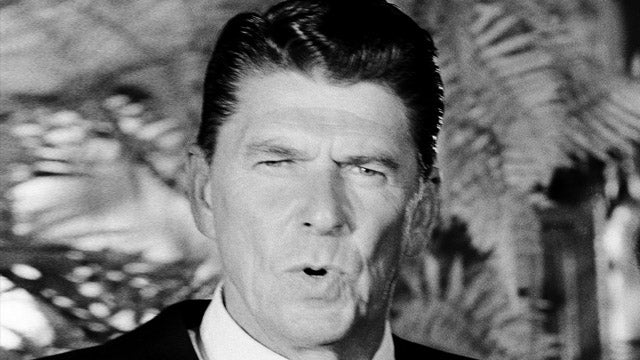 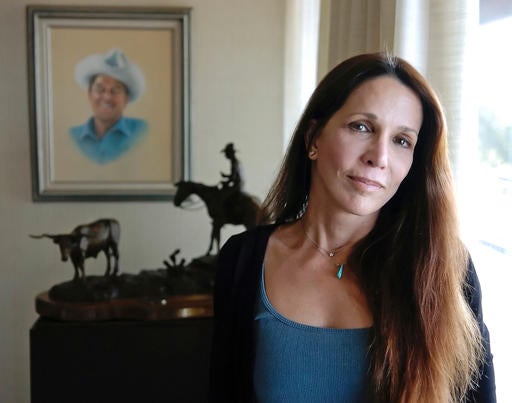 RUSH: I ran across a story at TheHill.com and I didn’t have a chance to get to this yesterday, and I intended to, but I’m gonna get to it now early. The daughter of Ronaldus Magnus — that would be Patti Davis — has written a new op-ed. Where did this thing run? Where did this thing…? I’m not sure where it ran. It doesn’t matter where it ran. Anyway, Patti Davis, the daughter of Ronaldus Magnus, says that her father, Ronaldus Magnus, “Would be appalled by the Trump presidency — She reflects on her father’s love for America…”

Oh, the Washington Post. That’s where it was. “…ahead of the anniversary of his death and what he would think of the nation today. She wrote, ‘My father would be appalled and heartbroken at a Congress that refuses to stand up to a president who not only seems ignorant of the Constitution but who also attempts at every turn to dismantle and mock our system of checks and balances.'” Ms. Davis, the truth of the matter is that we’ve got a do-nothing Congress.

They’re not standing up to anybody, especially the Democrats. If you want to really get down to brass tacks, where is the Congress supporting their president? This is the most popular Republican president since your dad, and it’s not even close — the most popular Republican president in his party. The man is doing wonderful things, Ms. Davis, for America. You may not like his attitude, manners, what have you. But the things that we confronted after eight years of the disaster that was the Barack Obama presidency?

For these things to be turned around in a year and a half — and, I tell you what, Ben Rhodes got his gig at MSNBC. He’s already… These people in the Obama Regime are already starting to cry and wring their hands. “It’s not fair! It’s not fair that Trump’s getting rid of so much of the Obama legacy. It isn’t fair.” I don’t care whether it’s fair or not, it is long overdue. Erasing the Obama legacy is one of the best things that could have happened to this country, bar none. But I want to address the primary complaint here from Ms. Davis, and that is that Trump is a heathen, that Trump is impolite, that Trump is a… 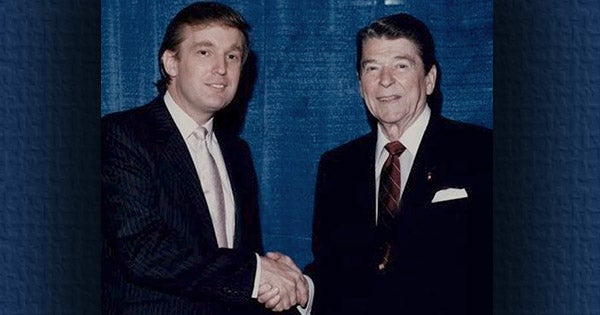 Well, you fill in the blank. He’s rough around the edges, he’s not of good cheer, any of this. I was reading a column at National Review by Victor Davis Hanson. The column was about the growing disparity of economic circumstances among the population of California, how there is blinding, obscene wealth all up and down the coasts ’til you get north of San Francisco, then it ceases. But outside of the coastal areas from San Francisco on down to San Diego, you go inland, and you have some of the worst abject poverty in America.

You have more illegal immigrants on welfare, citizens on welfare. I mean, there’s abject poverty in the valleys, in the inland areas of California. In this column toward the end of it, Victor Davis Hanson decided to go back and remind people of California during the governorship of Ronaldus Magnus. Now, Ronaldus Magnus was governor of California in 1966. And let me just read some of this to you, ’cause I guarantee you Reagan is so misunderstood. Who is it painting this picture of Reagan that everybody has today?

And what do they say? 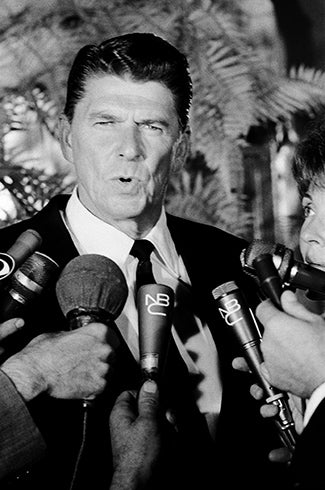 “Mild-mannered, got along with people, amiable dunce, nice guy, avuncular, slept during cabinet meetings — the best thing a president could do.” You know, all this revisionist history. It omits the fact that Ronaldus Magnus was a fighter, and if he had to get down into the gutter with these people, he went there. I want you to listen to some of this, because here comes Reagan’s daughter trying to say (paraphrased): Oh, my dad would be so appalled. My dad would be shocked! My dad would be totally disapproving.

“Of course, it is common to have a nostalgic view of Ronald Reagan, as model of genial, principled conservatism that might return to accelerate California’s salvation.” One of the topics that Victor Davis Hanson was addressing here was how did the conservative rebound. And, of course, everybody thinks, “Well, we need to be nice! We need to walk across the aisle. We need to shake hands. We need to show that we’re willing to cooperate, that we don’t hate anybody” and all this. Mr. Hanson here is writing to reject that.

There’s no way. That’s not gonna win anything, as Trump has demonstrated.

As the other so-called polite groupthink intellectuals in the conservative movement have demonstrated, that’s not the way to win anything. It may be the way to have yourself really highly thought of by others in Washington, but it’s not a way winning anything. “But a review of the 1966 gubernatorial campaign reveals one of the nastiest races in California memory. Reagan gave back everything that Edmund Brown Sr. dished out to him, and won by rivaling a later Trump in his often cruel invective. Reagan” in the ’66 gubernatorial campaign “castigated ‘welfare bums,'” that’s what he called them “and promised to clean up the ‘mess’ at Berkeley.

“And when governor, after failed popular demands that he be recalled, Reagan kept at it with rhetoric that again rivals Trump’s worst. Of the People’s Park demonstrations, declared, ‘If it takes a bloodbath, let’s get it over with. No more appeasement.'”

That’s not crossing the aisle, showing the fickle finger of friendship, seeking to cooperate. “If it takes a bloodbath” to defeat these people on the left, “let’s get it over with. No more appeasement.”

And the people that knew Reagan in ’66 speaking for Goldwater, they knew this about him. He was not a milquetoast, genial, absent-minded kind of guy. He was a down in-the-gutter, wherever-he-had-to-go-to-win kind of guy. Reagan “joked that he hoped the free food for poor communities leveraged by the terrorist SLA might be infected by botulism.” You remember the SLA, Mr. Snerdley? (interruption) Symbionese Liberation Army, Donald David DeFreeze was the head of that. They’re the ones that kidnapped Patty Hearst and went around robbing banks with her.

Gordon Lightfoot’s Sundown was one of their favorite songs they listened to out there. I don’t know why, but it was! (interruption) That’s right. Olivia Newton John — da da da da da da da da — If You Love Me, Let Me Know. It’s one of the… Those were the two favorite songs in the SLA. Had some of the other stuff in there too. But they supposedly brainwashed Patty Hearst; they’re running around holding up banks or pictures of it. And it was that group that Reagan said he hoped the free food for poor communities that this group was trying to leverage would be infected by botulism.

Can you imagine Reagan wishing people to be poisoned? Leftists, welfare…? (interruption) That’s right, they blew the head off the judge in public. So this would have been… When this was happening, the SLA, Patty Hearst, was not ’66. This would have been was early seventies. The SLA… Donald David DeFreeze was from Cleveland. I studied this group. This group fascinated me. Anyway, “Reagan did not call for a thousand points of light or a kinder, gentler state. Reagan was an effective governor, but the idea that he was a uniter is also simply not true, at least not until his second presidential term.

“He turned by damning the Democrats’ expansion of welfare dependency and promised to crack down hard on criminals and cheats (e.g., putting ‘the welfare bums back to work’).” When it came time to talkg about the judicial system, Reagan spared no expense criticizing them “as soft on crime… He won the governorship in part through his prior renegade stance at the boisterous 1964 San Francisco Republican convention, when he joined …

“He further infuriated the Republican status quo by running a last-minute insurgent campaign for president against the establishmentarian Nixon in 1968, and in 1976 by challenging Republican incumbent President Jerry Ford — an acrimonious, insurrectionary, and divisive primary for which Reagan was later blamed for the Carter victory. Indeed, the Republican establishment … never much liked Reagan until he won the presidency, blasting him as a yahoo who wanted to keep the Panama Canal or a voodoo economist who thought that cutting taxes and spending more on defense would lead to balanced budgets.”

Hey, this is a precursor to Trump. Reagan’s daughter doesn’t even get it! Reagan and Trump are closer in many ways than anybody would ever believe or understand. Mr. Hanson says, “I do not know who the next charismatic California Republican leader might be to lead a Reagan-populist revolt against the welfare state. Most likely, if it is to happen, it will probably be a Hispanic conservative who will sound a lot like the take-no-prisoners Reagan, and who will likely be just as shunned by the state’s and nation’s Republican establishment.”

The idea that Ronald Reagan didn’t mix it up, that he didn’t call people out, that he was always refined and polite? It’s just not true! This is politics. Reagan took ’em head-on, never backed down, and beat them. Two landslides: 1980, 1984. So don’t buy all this history revisionism that the proper Republicans are the polite ones, whom you never hear from. Those are the Republicans the Democrats/the media would love to be leading the party, because you don’t hear from ’em, and they end up acquiescing in all the issues. It’s Bob what’s his name from Peoria. Bob Michel, the old Republican leader in the House when they had barely a hundred seats.