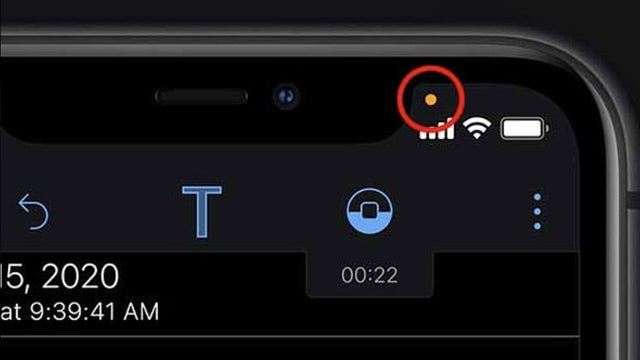 RUSH: I got a note today — as I told you, I am the tech go-to guy in any group of people that I’m a member. So I got from a staffer today, one of the highly rated, overpaid staffers sends me a U.K. Daily Mail — I’m just kidding about that. Snerdley knows. He’s laughing in there. It’s a U.K. Daily Mail story. A staffer sends me this. The headline: “iOS 14 Update Displays an Orange Dot to Warn if Someone Is Listening In.”

And I looked at that, and I said, “This is just unconscionable. That’s not what this is.” This furthers this notion that anybody and everybody can listen to your conversations on your phone and that Apple has now found a way to let you know when it’s happening. And that is not happening. It’s very hard for somebody to get into your phone and make that happen. That’s why we constantly tell you about Norton 360 and having VPN so that nobody can get into your devices.

But this is a purposeful attempt by — and I like the Daily Mail. I really like ’em. But this is irresponsible. What Apple has done here, it’s part of their privacy push. They want you to know when the microphone is on. And so, if you’re dictating that orange light is gonna go on. It’s the upper right-hand corner of the screen. And if the microphone is on, after you have turned it on because you are dictating, or if you are using Siri, the light will come on, and it’s just to tell you that the microphone is on. It’s Apple’s attempt to keep you as informed as possible about how your phone is functioning.

This headline: “iOS 14 Update Displays Orange Dot to Warn if Somebody’s Listening In.” No. It’s gonna display this orange dot 99% of the time when you are using the microphone. Folks, the number of times that a stranger or a criminal or a bad guy can get into your phone or your iPad and start listening to you is so tiny and infinitesimally small, you couldn’t make a statistic out of it. It happens, but not to the degree this headline implies. This headline’s irresponsible.

There are already enough paranoid people out there who think that the ChiComs and that Big Tech and all these developers that write these apps are out there monitoring you and listening to you and watching you. And I’m sorry, folks, but we just aren’t that important to that many people. It’s possible. But there are steps you can take to make sure nobody ever gets into your device. Norton 360 is an example of VPN.

If the light turns green, by the way, it means your camera is on. So then we can expect a headline: “iOS 14 Update Displays Green Dot to Warn if Someone Is Watching You Change Clothes.” And, look, I’m not a fanboy for Apple here. I’m just trying to be honest. I hate scaremongering like this. I hate these unjustified attacks. Look, if you want to go out and attack Apple, there’s plenty of stuff you can attack ’em on, but not this. This is actually their attempt to keep you more informed about how your device works.

So, you turn on dictation, you hit the microphone button on the keyboard, you’re responding to a text or an email, it’s a tiny little light. It’s gonna turn orange, and it just tells you the microphone’s on. And 99% of the time, 99.9% of the time it’s gonna be because you are using it, not some outsider. And the same thing with the camera.

If you make a FaceTime call, if you take a picture, a selfie, anytime you turn the camera on, it’s gonna turn green. It’s new with iOS 14. It’s simply their attempt to keep you more informed.

Look, I wanted to get that out of the way because this tech stuff is so misunderstood, and it is used to keep people so paranoid, and it fuels other conspiracy theories. Look, Big Tech is worthy of all kinds of suspicion. But what you need to be worried about Big Tech is their association with China and their unfair search results and the fact that they are totally biased and discriminatory against you if you are Republican or a conservative, not that they’re listening in to you.

They don’t need to. They can read what you’re typing in if they want to go that way, if you’re searching Google, for example. They don’t have to listen to you. And they’re not. And the same thing with the camera.