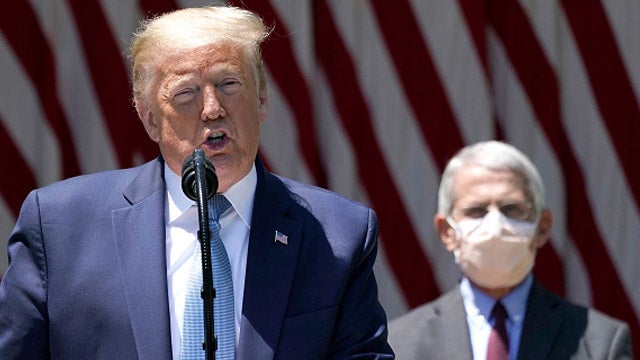 RUSH: Look at this. There’s a Rose Garden ceremony right now, and Dr. Fauci is standing behind Trump, for the first time wearing a mask. (interruption)

RUSH: All right. The Rose Garden press availability today, whatever it is, the president’s announcing Operation Warp Speed. And he said, for those of you in Rio Linda, it means it’s big and it’s fast. Well, he didn’t say, “for those of you in Rio Linda,” but he said it means big and it’s fast. He’s appointing some czar to come up with a coronavirus vaccine, he hopes, by the end of the year. Gonna be working on it very rapidly, very quickly, have been working on it. Feels really good that it’s gonna happen sooner than anybody thinks. Hopes to get it done by the end of the year. In addition, new therapies, therapeutic advancements. Treatments, in other words.

So the effort here that the White House is engaged in is to send the signal that they’re on top of this. They are not relaxing or wasting any time and they’re dead serious about the notion of a vaccine. The vaccine, that’s a tricky thing, it’s a tricky thing to commit to. This is the second time the president has said that he hopes they can get one done by the end of the year. That would be fabulous if something could actually happen.

Dr. Fauci is positioned right behind President Trump’s left shoulder wearing a gigantic mask. It looks like Dr. Fauci has been muzzled. He’s not gonna like the image this conveys.

RUSH: He’s announcing essentially Operation Warp Speed, which is the administration’s official announcement of the objective to find a vaccine for the coronavirus by the end of the year. And he has appointed a former executive from GlaxoSmithKline, a pharmaceutical company, to head up the effort. 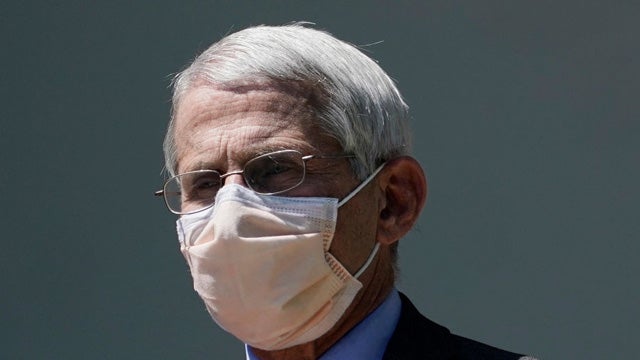 Dr. Fauci’s wearing one of the biggest masks I have ever seen in my life. It goes all the way from the bridge of his nose almost down to his tie knot. There is just about an inch of skin there on his neck that is exposed. I mean, just as a casual the observer, when the president’s speaking the only other person in the camera shot is Dr. Fauci, and it looks like he’s being muzzled. You can’t read his facial expression. Dr. Fauci has said a vaccine, well, may never be a vaccine. Maybe 12 to 18 months at the outside.

Fauci’s standing there listening to this commitment to come up with a vaccine by the end of the year, which is six months from now, seven months. And I would love — he’s not rolling his eyes, and he wouldn’t do that. He wouldn’t engage in a public display of doubt like that, but still, it’s a fascinating shot.

They keep moving the goalposts as to when we can reopen. First they said we had to flatten the curve. We flattened the curve. Then said, “Well, that’s not enough. Now we gotta do X. Get more testing out there.” So then we got more testing than any country in the world. It’s still not enough. We need to do this. And so when we did the next thing and finished, that’s still not enough. We can’t go out ’til there’s a cure. We can’t open up ’til there’s a vaccine.

So at every stage where they have said we could relax some of these restrictions, we have met those requirements, and the proponents of the lockdown want stay locked down.

RUSH: I’ll get back to the phones here quickly, but I want to play a sound bite for you. President Trump at the White House Rose Garden just moments ago talking about Operation Warp Speed, the attempt to get a vaccine developed by the end of the year.

RUSH: Of course not. 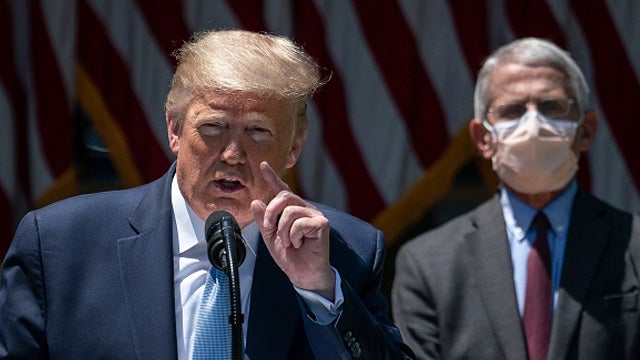 THE PRESIDENT: And I just want to make something clear.

THE PRESIDENT: Vaccine or no vaccine, we’re back —

RUSH: There we go.

THE PRESIDENT: — and we’re starting the process. We haven’t seen anything like this in a hundred-and-some-odd years, 1917.

THE PRESIDENT: You fight through it and people sometimes — I guess we don’t know exactly yet, but — it looks like they become immune or at least for a short while, and maybe for life. But you fight through it.

RUSH: There he is. He’s alluding to herd immunity. It’s the last thing that Dr. Fauci wants to hear. So Trump dances around it, while Fauci can’t say a word ’cause he’s muzzled in this gigantic mask standing right behind… (laughing) It’s probably unfair of me to characterize it that way. It’s just how it looked, you know? It’s all it is.

RUSH: Very quickly, grab sound bite number 26. The subject of the masks. A lot of people at the Rose Garden ceremony today were wearing masks. The Scarf Queen was wearing a mask. By the way, the Scarf Queen’s scarf went all the way down to her knees today. Did you see that?

(interruption) Well, it did. I mean, I’m sorry for pointing it out, but it did, and then Fauci’s mask looked like a bib. And then a bunch of other people were wearing masks. The president was asked about it by a CNN infobabe. “Mr. President, can you just clarify? Why are some of you wearing a mask and some of you are not?”

Oh, a program note: Folks, it’s back to the treatment rigors for me on Monday and Tuesday, so I’m gonna be out Monday and Tuesday. We have guest hosts Mark Steyn and Ken Matthews. Look, it’s always possible that something happens that I’ll be out Wednesday too. But the intention’s Monday, Tuesday, 50-50 on Wednesday. We’ll see how things go.