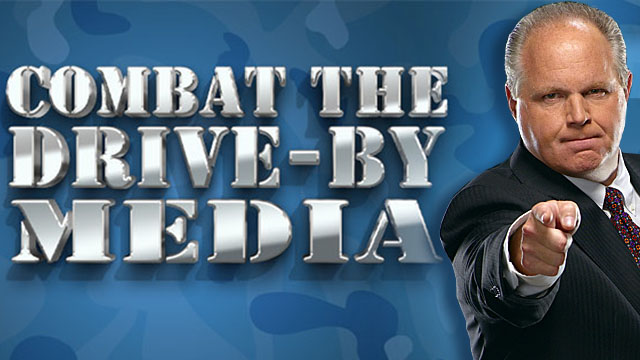 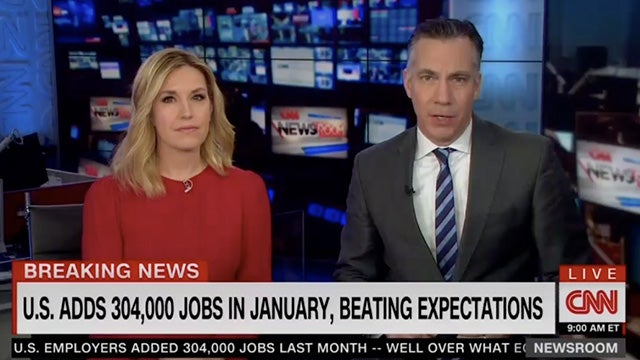 RUSH: The media today, depending on where you tuned in, was either having orgasms or panic attacks over the economic news. It was a shock. The Drive-By Media cannot believe it. The Drive-By Media thought that the bottom was gonna come out of the economy because of the shutdown. They had all their experts telling them that we were gonna lose jobs, the economy was gonna have zero growth. Remember them reporting all of that crap? And I’m sorry to use the term, folks, but it’s exactly what mainstream media reports, is crap. That because 800,000 federal workers were out of work for a month, the U.S. economy was gonna come to a screeching halt.

Not even close! The U.S. economy grew, created 304,000 jobs versus the 175,000 that were expected. The significant percentage of them were jobs in construction that are paying close to 80 to $90,000 a year. The retail sector was one of the lowest sectors where new jobs are created, and those are, you know, 12 to $14 an hour jobs. It was fabulous everywhere and the shutdown had practically no impact. The stock market’s way up on the — it’s up because of all this.

Let’s go to the audio sound bites and listen. It’s CNN’s Christine Romans. We’re starting at the top at number 1. These people were, I mean, they were depressed and despondent today, gobsmacked by these numbers ’cause they believed all of their crazy, inside-the-Beltway experts that 800,000 federal workers missing two paychecks was gonna lead to stagnant and zero economic growth. The degree of stupidity that now populates every chair on a set in a news network is breathtaking! It’s identical thinking; it is groupthink; there’s not one bit of curiosity. And they’re all ignorant. Here is Christine Romans after Jim Sciutto says, “The U.S. adding 304,000 jobs in January despite the record-breaking government shutdown. This is the 100th consecutive month of job gains. This is a big number.”

ROMANS: It’s a big, strong number. It’s a number I think the White House is really gonna like. And it shows you that hundred months, I think, is really important here because this has been a long, steady job market recovery. And you’re really finally starting to see the fruits of that in wages as well. Wages up 3.2%. Really important. Overall, these numbers pretty much show you that shutdown did not hurt the overall labor market. We saw hiring across the board. We’ve been waiting for wages to come back: 3.2 year-over-year wage growth. Now you’ve got three months in a row of 3% plus. For workers, that’s a very good sign. 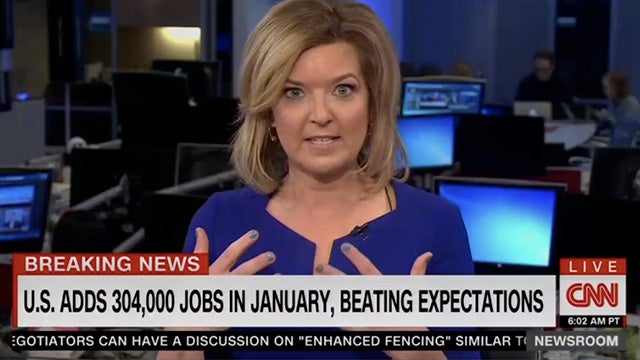 RUSH: So next is Poppy Harlow, and she is talking with the chief economics and business correspondent Christine Romans, and they’re talking about the January jobs numbers and Trump, and you’ll hear Sciutto in there as a third voice, but listen this.

HARLOW: The president gets briefed on these the day before.

HARLOW: So he would have known about this —

HARLOW: — yesterday! And he was very confident in that interview with the New York Times —

ROMANS: This is a strong labor market, and I hope what it means for our viewers is this is the year of a raise. (snickering) Workers for the first time in a long time are getting more for their hours.

RUSH: Poppy Harlow, they’re upset that Trump knew about this yesterday and that’s why he was in a good mood. Poppy Harlow surmising that that’s why Trump was so confident meeting with the ChiComs. How dare he. But no matter where you look in the anti-Trump media, there was sadness, shock, dismay, disappointment. They really believed, they really believed and they were hoping for zero economic growth. They were hoping for devastating economic news on the jobs front because, to them, when 800,000 federal workers don’t get paid, why, that does mean the economy doesn’t churn, doesn’t move. Those 800,000 government workers — no offense intended — produce zilch.

RUSH: Let me share with you some of the news headlines that were out in recent days predicting the jobs numbers today. Yesterday in the New York Times, January 31st: “Why This Jobs Report Will be a Mess.” CNN, January 10th: “How the January Jobs Report Could Be Shaped by the Shutdown.” Fox News, January 3rd: “Partial Government Shutdown Could Hurt January Jobs Numbers.” MarketWatch, January 31st: “How the Government Shutdown Had Impact the Jobs Report.” It was all negative news.

So you see virtually everywhere, including at Fox News, the pessimism was out of control. It was running rampant. The government shutdown. The government shutdown! Because 380,000 furloughed workers did not get two paychecks, this was gonna bring the U.S. economy to a standstill. It was all over the place. The degree of ignorance on economics, the lack of understanding on the part of people who are supposed to know more than the rest of us. Striking.