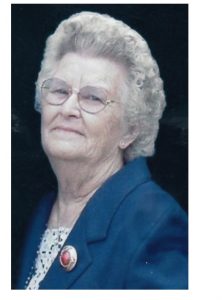 Edith was born December 13, 1923 to Ivo and Ruth Shipman Jones. She was the oldest of five children.

Edith A. Jones and Raymond “Pat” Green were married on Edith’s birthday in 1941. Their youngest son, Charles, was born on December 13, making December 13 a special day to celebrate.

Edith has always been an inspiration and role model to everyone that had the privilege to meet her. She always put other people’s thoughts, feelings, and needs before her own.

Edith will be laid to rest beside her husband of forty-seven years Raymond “Pat” and their son, Jacky Ray at New Hope Cemetery, Peace Valley, Missouri.

Contributions may be made to St. Jude’s Children’s Hospital in Edith Green’s name, and can be left at the funeral home.