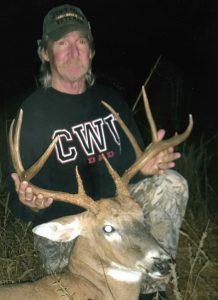 Ed was born on June 1, 1951 in West Plains, Missouri to the late Gerald (Pete) Anstine and Rosalie (Crick) Anstine.

Ed is preceded in death by his parents; one brother-in-law, David Johnson, and one niece Tracy Dawn Webb

Ed graduated from West Plains High School in 1969. Ed is an Army Veteran, having served in Vietnam from 1971 to 1973. He worked for many years as an accomplished carpenter.

Ed was an avid deer and turkey hunter. His love of nature and family spilled over into everything he touched. He lovingly built the family home for his wife Kathy. He never met a stranger and had a way of making everybody laugh. His family and friends were of utmost importance to him.

Ed was baptized at the First Assembly of God Church in West Plains, Missouri. He was a good honest, christian man.

Graveside services for Ed Anstine will be held Thursday, October 4, 2018 at 2:00 p.m. at Homeland Cemetery, Howell County, Missouri, under the direction of Carter Funeral Home, Inc., West Plains. Military rites will be conducted by the West Plains Honor Guard and the Missouri Veterans Program.

In lieu of flowers, donations may be made to the American Cancer Society.