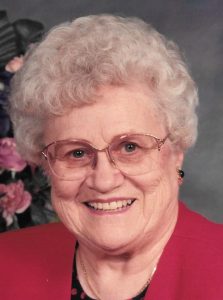 God called her Home to Himself on September 29, 2019, while residing in West Vue Nursing and Rehabilitation Center in West Plains, Missouri.

Eulah made the most important decision of her life, her profession of faith in Jesus Christ as her Savior, when she was a young girl.

On August 19, 1948, Eulah was united in marriage with the one man who won her heart, Robert D. Payne (Bob). To their happy union two daughters, Patricia (Barger) and Marsha (Harter), and two sons, Kenton and David were born.

Eulah was a long-time active member of First Freewill Baptist Church, West Plains. She served as a volunteer at the Ozarks Medical Center Hospital and the hospital thrift shop for over twenty-five years. Eulah loved the Lord, her family, and her church and will be greatly missed by everyone who knew her because our lives are better for having known her.

In lieu of flowers, memorial contributions may be made to the Gideon’s and can be left at the funeral home.