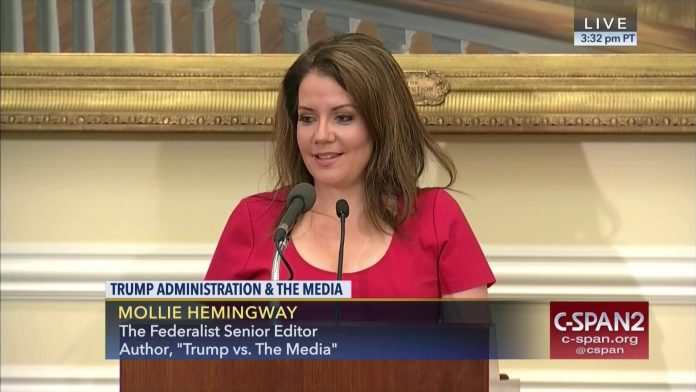 RUSH: I mentioned I was gonna go through some of the silly and ridiculous fact checks. 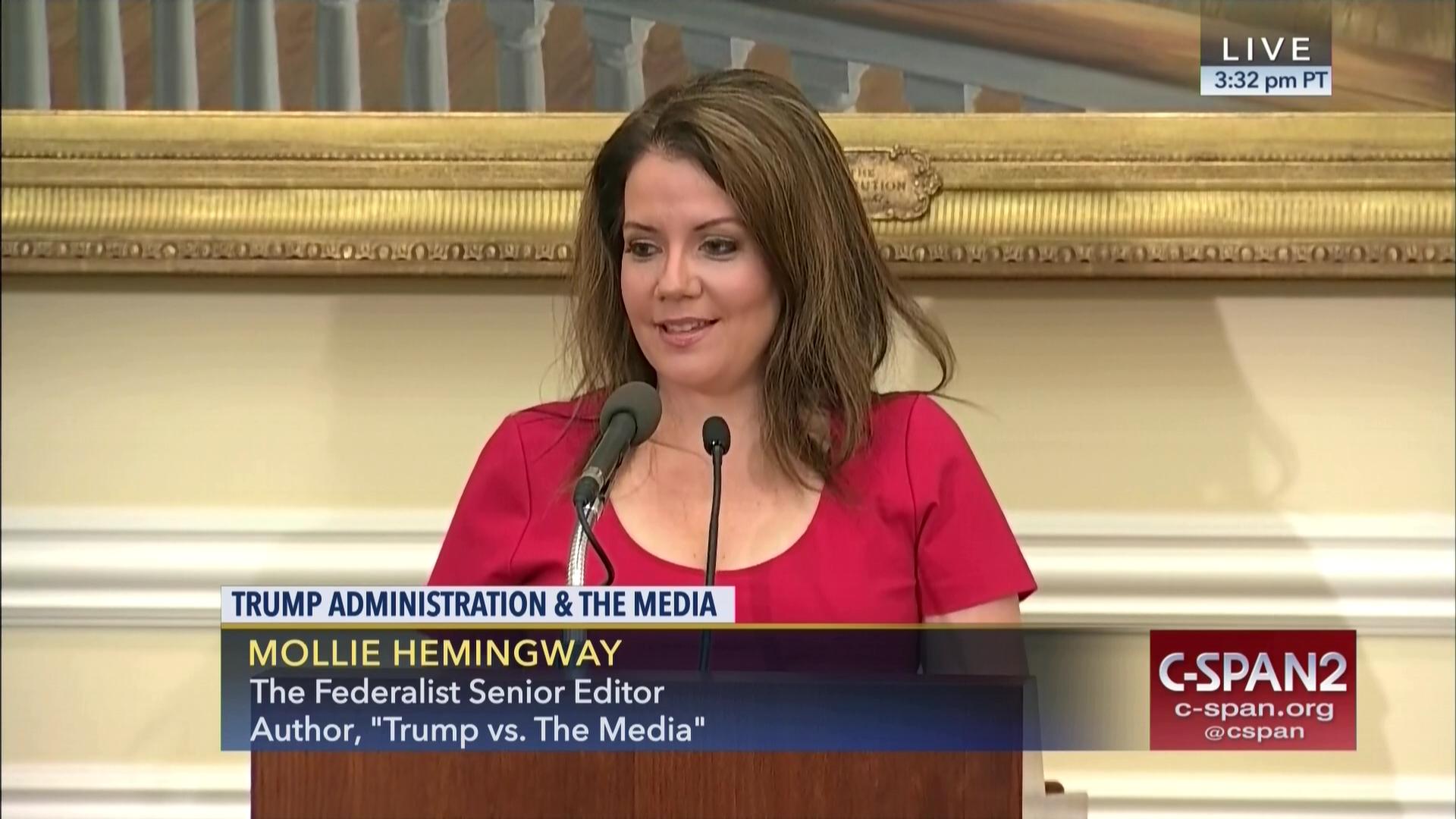 I think to do this, I’m going to enlist the assistance of Mollie Hemingway at The Federalist. She has highlighted some of the (chuckles) most ridiculous examples of fact-checking. She writes here, “The Democrats’ theme for” last night, all during the day yesterday, and in days leading up to Trump’s national address — the Democrat theme, the media theme — “was ‘facts, not fear,'” meaning Trump was gonna lie. He was just gonna scare people and he was gonna frighten people. He was gonna lie to people, and he was gonna get people thinking things that aren’t true, and so the media was demanding that Trump stick to “facts, not fear.”

They were demanding of Trump all day that he not lie. Even that little gnat, Jim Acosta from CNN, went up to Kellyanne Conway and said (paraphrased exchange), “Kellyanne! Kellyanne! Can you assure us, can you promise that the president will not lie tonight? Can you do that, Kellyanne?” And she replied, “Jim, as soon as you stop lying in some of your reports… You know, Jim, you’re an ass, and everybody in the press corps thinks you’re an ass. They don’t even like you. I’m the one guy that’s actually showing up on your network trying to help you, you ass.” I’m paraphrasing that. That’s pretty much it.

So… “The Democrats’ theme for the evening was ‘facts, not fear.’ Many major media also adopted the same theme. The coordinated talking point began hours if not days before the speech even aired, with CNN’s Alisyn Camerota saying yesterday morning, ‘Fact-checkers are eating their Wheaties and getting extra rest since they will be working overtime tonight to separate fact from fiction on this border situation.'” So Trump was gonna lie, and it was gonna be so bad and so intense that the facts-checkers are gonna have to have a pregame meal, get a lot of sleep, ’cause they’re gonna be busier than they’ve ever been ’cause all Trump’s gonna do is lie!

“As soon as the speech ended, White House press corps mascot Jim Acosta recited his rather groan-inducing rehearsed line that Trump’s address ‘should have come with a Surgeon General’s warning that it was hazardous to the truth.’ But when it came time to back up this talking point about factual inaccuracies, the media whiffed. Most of the alleged ‘fact’ ‘checks’ were instead critiques of opinions. Many critiqued things not included in Trump’s speech. And sometimes the ‘fact’ ‘checks’ dinged Trump for saying completely true things. Take the Washington Post, for instance.”

This is true. They actually criticized Trump for saying things that are true. Washington Post: “Fact-checking Trump’s address: ‘266,000 aliens arrested in the past two years.’ The number is right but misleading.” That’s the fact check. “The number is right but misleading. It’s important to keep in mind that this figure includes all types of crimes, including nonviolent offenses such as illegal entry or reentry.”

So they characterize Trump’s claim as factual, as misleading because the figure includes all types of crimes. Who in the world could make this up? That’s a fact check? They fact check and they found out his right but it’s misleading because it’s all crime. It further makes Trump’s point, in other words. They’re claiming Trump undersold his point! And it wasn’t the only fact check of that nature.

Politico. Ted Hesson or Hesson, I don’t know how to pronounce it. “Ted Hesson did such a bad ‘fact’ ‘check’ that it’s almost impressive. Among the things he checked as ‘not true’ was Trump’s contention that there’s a crisis on the border.”

Trump says there’s a crisis on the border and Politico fact checks it and says not true. That’s not a fact check. That’s simply a difference of opinion. There is no fact check about it.

“Even worse for Hesson, however, was his reasoning. He said it’s ‘not true’ that there’s a crisis because the number of people caught crossing is below what it was during Obama. It’s as if he hasn’t heard a single administration official in recent weeks explaining that the reason why the Department of Homeland Security is burdened is not because illegal crossings are up in general, but because of the type of crossings, such as unaccompanied minors and family units from Central America that, due to our laws, cannot be returned to their homes.”

That’s why it’s a crisis because of how and why they’re coming, not the numbers. But this guy, “It’s not a crisis because the numbers are not as high as Trump says.” “Hesson is apparently unaware that resources needed for dealing with the illegal crossings by single adult males from Mexico that may have dominated earlier years are completely different than those needed for family units who claim asylum status after being caught in the country illegally.

“He also said it was wrong to say that ‘Our southern border is a pipeline for vast quantities of illegal drugs’ because most of the drugs come through legal points of entry. Well, Ted, that’s probably why President Trump said that part of his request from Democrats was for drug-detection technology.”

I mean, these people were fact-checking things that were not incorrect! They were making it up or saying that they simply disagreed with Trump, but because their opinion differed from Trump’s, that Trump’s facts were wrong. Finally, this guy from Politico, Ted Hesson, “said it was wrong to say that Schumer ‘has repeatedly supported a physical barrier in the past’ even though that’s absolutely true.” 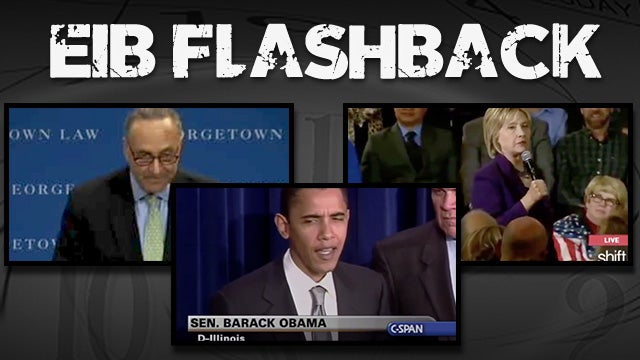 “He admits Schumer voted, for example, for the construction of nearly 700 miles of a physical barrier in 2006 but says Trump said that wasn’t enough. Therefore, Trump’s accurate claim that is not misleading is judged to be ‘misleading.’”

“A New York Times article originally headlined ‘Trump Cites Misleading Statistics of Crisis And Crime Along Border’ failed to explain what the misleading statistics were. Perhaps that explains why they changed the headline to ‘Trump Escalates Border Wall Fight in National Address.’

“In a rather shrill opinion piece billed as straight news, Peter Baker claimed, without evidence, that describing the situation as a crisis ‘raised credibility questions.’ Then he went on to slay strawmen and other items the president didn’t even mention.”

And there are other examples. They claim Trump was wrong when he said that one — this is CBS, and they had to pull this — CBS claimed that Trump was wrong when he said one-third of women in these caravans face rape. It’s actually 60 to 80%. Then they realized, wait, that doesn’t help us, and they pulled the fact check. But it was revived by the Wayback Machine, and it lives to be seen by other people.

Let me take a break. That’s just a sample, folks, and those are some of the highlights, but the whole fact-checking premise blew up in their faces all night long.