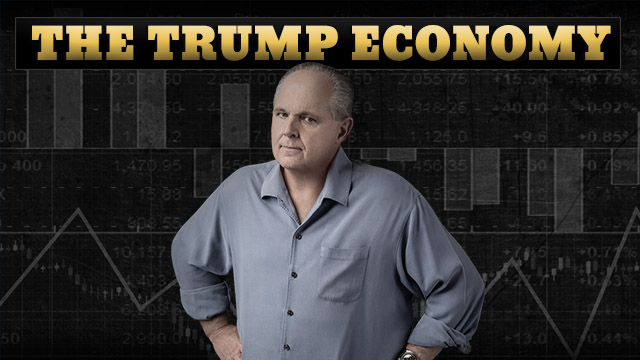 RUSH: Well, the chairman of the Federal Reserve just did it. He just raised interest rates for the fourth time this year. They raise interest rates to slow down an out-of-control economy. The thinking is (impression), “Inflation is the worst enemy of anybody that has any money, and we on Wall Street — and we in the Hamptons and we in Hollywood and Silicon Valley — we have all the money, and we don’t want any inflation. Oh, by the way, we also hate Donald Trump, and this economy of his that is outdoing anything that Barack Obama ever did, cannot stand.

“We cannot have some lunatic like Trump appear to know more about economics than the brilliant Barack Obama. So we are going to protect our fortunes and the legacy of Barack Obama by raising interest rates again, which will slow down an economy — which we will then happily begin predicting a recession is around the corner as a further means of harming Donald Trump, who we personally and literally despise.”

That’s what just happened, and that’s the reason for it. It doesn’t matter if inflation destroys the value of your money. They’ve got enough money to withstand the hit while they protect Obama’s legacy and try to damage Trump. At the same, if the U.S. economy has to take a hit? “Well, we’re supposedly protecting it, Mr. Limbaugh. You’re dead wrong. We’re protecting the U.S. economy.” You don’t raise interest rates! You guys have been talking about an economic slowdown here for the past month.

You’ve been trying to talk us into an economic slowdown. You’ve been doing things to talk the stock market down, and you’ve now done it again! Raising interest rates? You watch. You watch what’s likely gonna happen with the stock market. Right now, it’s up 49 and it’s up 50. In fact, you know what? It may go up as a means of saying, “The market is approving of what the Fed has just done. You plebes don’t understand anything. The market really understands that we need to destroy Donald Trump.

“For the good of all of us and the Obama legacy, we need to destroy Trump, and so we’re gonna reward this economic-killing maneuver by having the stock market go up.” Any number of things are possible. But you don’t raise interest rates if you really, really think the economy is slowing down or if you think that a recession is in the future. You don’t. In fact, this idea of raising rates to slow down an economic recovery is kind of silly to me. I’ve never understood it anyway, this preponderance of evidence of fear over inflation.

Inflation’s there anyway no matter what these people do. You can’t go back to any previous time in American history and say there hadn’t been any inflation. There always is. You can find the nearest inflation calculator on the World Wide Web. Just do a search and compare any two years you want, and you’ll find that pretty much there is inflation no matter what two-year or 10-year period or 20-year period you choose. I love… I read, as you know.

Some of the books I like to read are the Nero Wolfe murder mysteries, and they’re written the twenties and thirties and forties. It’s fascinating. Like, they’ll talk about a bank robbery of 10,000 bucks in 1940. I say, “What’s that worth today? So you get the inflation calculator out. And you find out that $10,000 then is the equivalent $220,000 today (chuckles) and it helps you put things in perspective for what you’re reading about. The point is that there is constant inflation all the time, and this idea that any time an economy starts roaring, we gotta slow it down?

It’s silly. I’ve never understood. Any time, any time businesses start hiring employees, the Fed gets nervous! “We might need to slow this down. ” When wages go up — whenever there seems to be any good economic news — the Fed seems to jump right in there and think we need to put the brakes on so that we don’t go out of control and have hyperinflation. Now, I have a bunch of economics friends, economist friends, and I’ve asked them about this. And the answers that I get are indecipherable. They start speaking economist lingo, and you lose ’em.

To me, it has never made any sense why a roaring economy must be stopped. Not slowed down, but stopped. My whole life, it’s not just now. A booming economy, a raging recovery is a bunch of bad news to a certain number of people. So we start tinkering here with quarter of a point in the Fed fund rate or do this or that, thinking we can tinker and slow down a part of the economy here so we don’t lose control of it, rather than trust the market. Markets work, if you just get out of the way and let them. But socialists just can’t get out of the way.

Socialists can’t just get out of the way and let markets work. So this is going to probably, in the long term, put the brakes on whatever economic… I’m telling you politically the enemies of Donald Trump do not want a roaring economy. It is still considered the best asset a candidate, particularly presidential candidate running for reelection can have is to have a great economy at the time that he can claim responsibility for. So they can’t allow that. The swamp cannot permit a roaring economy that is credited to Donald Trump.

But when economies go south, when they slow down, when they enter recession, presidents also get the blame for that. The Obama economy was a joke. The Obama economy was the equivalent of a flatline, because they wanted it. You know, Obama’s presidency was one which attempted to reorder American priorities and expectations. And one of the expectations that Obama and his team attempted to reset was this idea that the American dream is defined by every generation of kids doing better than their parents.

“We gotta bring that to screeching halt,” they said. “We can’t logically expect that to continue.” So they establish this new metric of we’ve seen our better days. We’ve had a good run at it. Now we gotta get real. We have to admit that we can’t continue this kind of economic growth that has no end to it, and we need stewards to manage the decline. “We need thoughtful, caring, reasoned, sophisticated, Ivy League-educated people to go in there with the levers and the dials and stuff.

“We need to be able to manage the decline so that it is equitable and fair and so that the pain is spread equally, rather than felt primarily by the poor and women, who are always hardest hit.” So that’s what’s the Obama economy was. The Obama economy never even got close to 3% economic growth. It’s become the standard for the Trump administration. Now, all during the Obama years, they told us 3%’s not possible. When Trump ran for president and said he was gonna shoot for five or six percent, do you remember what they said?

“That’s irresponsible! That’s irresponsible. That’s just further evidence that Donald Trump is done what he’s talking about, to run around and tell people we can have 5% economic growth, 3.5% or 4%, whatever? It’s irresponsible! We can’t do it,” and then Trump did it, and of course who’s got egg on their face? “So we have to make sure that it doesn’t stay at 3.5%.” If you pay any attention to the news like I do, you can’t have missed all of the fearmongering talk about a recession being right around the corner, an economic slowdown. All of the economic wizards are seeing it.

We must get concerned. We must be vigilant. We must take extra care and caution. All this gobbledygook. It’s all related to Brexit and it’s all related to the European Union and globalism and climate change. If you want to be accepted by the in crowd, establishment, the swamp, whatever, you’ve gotta sign onto this kind of stuff. So it’s just another piece of the ongoing puzzle or effort to diminish the achievements of Donald Trump and to recategorize them, recharacterize them.

It’s not really achievement but kind of quirks, you know, accidental quirks that really have no solid basis of foundation. They just kind of happen.