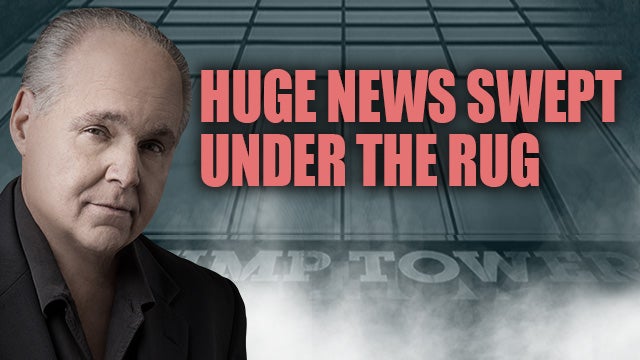 RUSH: Now, before we get into the latest on impeachment and begin to tear that down and analyze it and so forth, I think there is some absolutely huge news that is being glossed over. You know, they’re not even having to sweep it under the rug because the whole thing’s already been swept under the rug. The FBI and the FISA court — the Department of Justice of James Comey, Andrew McCabe, Dana Boente, Rod Rosenstein — have all admitted to abusing their power. They have all admitted that their FISA warrants to spy on Carter Page were bunk.

They have admitted that they should not have been sought and that they should not have been granted. The entire pretext for the so-called investigation of Donald Trump for colluding with Russia — the FISA warrants that opened up the spying — have now been admitted to as fraudulent. Now, let me put this in perspective for you. The FBI and the FISA court now admit that they abused their powers, and all of the people involved in getting those FISA warrants applied for and signed off on — whether they’ve admitted to it or not — have now been caught up in abuse of power and fraud.

Where are we? The Democrats and their media buddies would rather pretend that Donald Trump abused power in a phone call with the president of Ukraine and sweep this under the rug. The initial and original operation of this coup — this silent coup designed to get Donald Trump — has never been able to stand the weight of truth and authenticity. Now, I know it’s not all four FISA warrants, but come on. They’re admitting that two of them here were bogus and were not properly put together. The whole thing could be a stand-in for that.

RUSH: I want to go back to the FISA warrant story for just a second. I want to be specific about this. The FISA court (i.e., the DOJ) have admitted that at least two of the four warrants to spy on Carter Page were illegal, which means that all evidence collected from that surveillance cannot be used.

By the way, surveillance of Carter Page? He was ever been charged with anything. Surveillance of Carter Page was simply a way to open a window to spy on the entire Trump campaign and Trump personally. But remember on whose watch all of this occurred. It occurred during the Obama administration. It occurred while Loretta Lynch was the attorney general. It occurred while Comey was the FBI director. Top people in the Obama administration approved, coordinated, and covered up illegal spying on the Trump campaign.

You want interference with an election? Try that! You want corrupting an election? You want meddling in an election? Try what the Democrat managers are doing in the Senate today. They are corrupting the very idea. They are corrupting the integrity and honor of presidential elections much more than has ever been attempted, done, or accomplished by the Russians. So this is a tantamount admission that Democrats interfered in the 2016 and 2020 elections. The warrants to spy on the Trump administration were illegal.

Now, who are these people? Who’s Obama? Who’s Loretta Lynch, James Comey, Clapper, Brennan, you name ’em? These are the same people who perpetuated the Russia hoax. The same media who has protected all of those involved abused their power — and even now, the media has no interest in running this story. You will not see this story in the New York Times, Washington Post. You won’t see it anywhere in mainstream media. But what does it mean? It means that accusations the Obama administration spied on the Trump campaign are true.

“The Department of Defense may have used taxpayer funds to pay longtime informant Stefan Halper…” Stefan Halper is knee-deep in the effort to undermine George Papadopoulos and make it look like the investigation began when Papadopoulos started bragging about his knowledge that the Russians had a bunch of Hillary Clinton dirt. “Stefan Halper, a Cambridge University professor, [was paid] to recruit members of the Trump campaign as sources in the run-up to the 2016 election.” This comes from Senator Grassley in a letter Wednesday.

Grassley “asserted that it was ‘unacceptable’ that the DOD spent most of 2019 dodging his requests for information about Halper’s contacts with U.S. officials…” Halper had two jobs. First was to try to get hired on the Trump campaign, thereby start contacting Russian friends of his and make it look like the Trump campaign was colluding. But Halper didn’t get hired. So his next job was to recruit members of the Trump campaign, Trump foreign policy apparatus and so forth and try to corrupt them as engaging in illegal contact with Russia. This is all coming out.

Now we find out the Pentagon paid him!

The Pentagon, the Department of Defense paid Stefan Halper, not the FBI and not MI5. So it wasn’t just the Obama DOJ. It was the Obama Department of Defense. Now, who do you have over there that might have been involved in this? Well, you got a bunch of generals that are Never Trumpers and hate Trump to no end. All of this abuse of power, all of this meddling in an election — and, by the way, meddling in the 2016 election (and continuing this effort to overthrow it and to undermine Trump) constitutes meddling in the 2020 election. Meanwhile, Trump is undergoing a Senate trial for all of this?