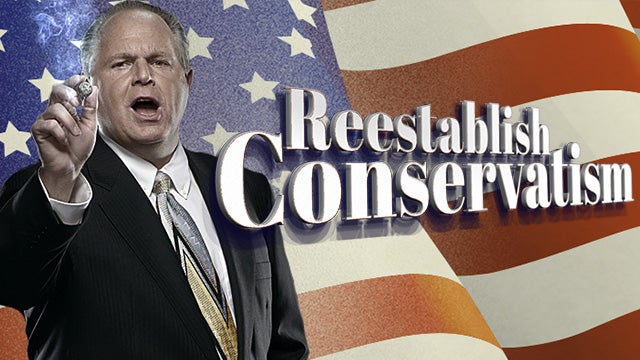 RUSH: Here is James in Louisville, Kentucky. Great to have you on the program.

CALLER: It is an honor to speak to Maha Rushie, the great and only one. You know, I’m clergy, and I am a former bleeding-heart liberal. Five years ago… I used to be very liberal, very liberal, and five years ago I started listening to your show, and here’s what I teach people all the time. What you taught me is liberalism, the old saying, “You give a man a fish, he eats only for a day.” But conservatism teaches you, “Teach a man how to fish, and he eats for a lifetime,” and that really is a big difference between liberalism and conservatism.

RUSH: That’s very basically true. Exactly right. So you were…? You’re a former liberal, you found the program five years ago, and that’s what resonated with you, huh?

CALLER: Right. It’s just your education because, you know, when I watched the news and I listened to the news, man, it is so biased. It is so extremely biased. You can watch CNN at 8 o’clock, “Breaking News!” and they’ll still talk about this nonsense about the Ukraine. And then at 12 o’clock, they’re still talking about it. It’s like, is anything else going on in the world? Another person who really changed my perspective was George W. Bush.

I really, honest to God — I don’t care what anyone says — think he was truly one of the best presidents America has ever had, and I think history will get it. And it’s because of you. Because there are extreme conservatives who have gone a little bit too far. But your logic is clear, it’s precise, and you don’t present yourself as being higher than anyone else. You just teach people that conservatism is all about doing it on your own, not expecting a free handout every time around, and —

RUSH: You know, I’m glad that you pick up on that. I’m glad that you pick up that all I’m doing is throwing it out for people to consider and adopt themselves, that there’s no arrogance here and there’s no condescension, that I don’t look down on anybody. You don’t know how right you are on that. I do everything I do here with the first thought in my mind that this audience is smart enough, bright enough, engaged enough to know what I’m talking about.

I do not think that you or anybody else listening to this program is beneath me in any way. And you’re exactly right. You watch Drive-By Media, left-wing media, and they are talking down to everybody. They’re not even talking to you. They’re talking to each other. They’re trying to impress each other. They’re not even making a connection with you, the viewer. So you’re left to look at them and you say, “My God, can you people not talk about anything else?” because they are not reaching out to you. They’re not connecting with you. It’s that simple. Am I right?

CALLER: Oh, a million percent. I mean, literally, I was — I really, truly was — hook-line-and-sinker liberalism. I mean, to the extreme. And then when I began to listen to you, I sort of said, “My God, man, this guy doesn’t know what he’s talking about.” But then I started listening, and I started thinking, and the points that you make are not points of arrogance or hatefulness or judgmental. It’s logic, and it’s just basic human decency and logic.

RUSH: Well, you know, I’m glad that you picked up on that well. Logic, to me, is something common sense. (sigh) I’m amazed at how rare it is. I think logic is the simplest thing in the world! (chuckles) But for a lot of people it’s a mystery. But there’s a contradiction here. Logic, by the way, is the root to being good in math — and I am horrible at math, advanced math. You get into trig, advanced algebra… I could do up to algebra. Beyond that, I was challenged. But it’s just logic.

Economics is just logic — if you have somebody who understands it, who can present it to you in an understandable, simple way. So many specialists at what they do, James, purposely complicate what they do to make sure people can’t understand it to the point of becoming competitors or entrants into the field. So economists have their own lingo that they use to talk about things like “basis points” and other terminology than the parts of everyday economics language.

And it’s designed to make you feel left out.

And that’s exact opposite of what I want to do.

I don’t want anybody to feel left out of anything here. I want everybody to feel like they’re in on everything that I’m talking about — like it’s not hard to understand — and if it is complex, that I can take the complexity out of it, and I can drill down to the essence. It worked with you, because the example you cited about teaching somebody to fish and they can eat for the rest of their lives — rather than sit around and wait for handouts and be scared about going hungry every day — is a great example of that.

So I appreciate the call. I’m glad you’re part of the audience, and I know we’ve got you. Once you’re here, you’re not gonna go anywhere. I appreciate it.