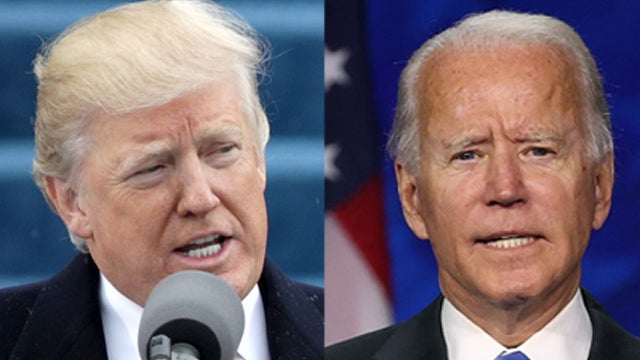 RUSH: At 46%, Trump’s pre-debate job approval is the highest since May. This is a Gallup poll, and there’s another fascinating aspect to this Gallup poll I haven’t seen reported yet.

RUSH: Charles Gasparino. I got an email from a friend in the last hour, and the subject line of my friend’s email is: “What the heck am I missing here?” The email was a tweet from Charles Gasparino. Charles Gasparino is an economics reporter. Where is he, at Fox or CNBC? Maybe he was at CNBC and went to Fox, or the other way around. I’m not sure where he works now. 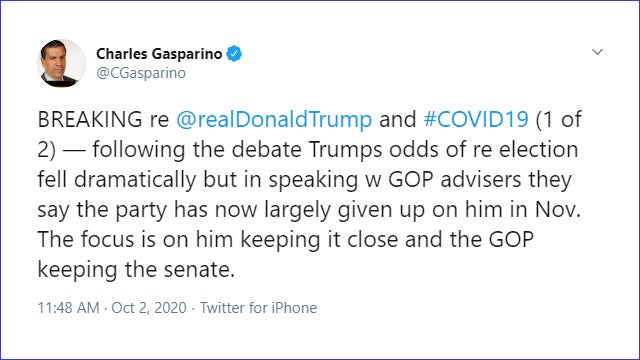 He may not work anywhere. Hell, I can’t keep up. Anyway, here’s what Gasparino… (interruption) He works at Fox Biz. Okay. Here’s what he said. “Following the debate Trumps odds of re election fell dramatically but in speaking w GOP advisers they say the party has now largely given up on him in Nov. The focus is on him keeping it close and the GOP keeping the senate.”

So my friend sends me this note and asks (sputtering), “What — what — what — what — what am I missing? Why do I not look at it this way?” and I wrote back, “Very simple reason” You don’t believe the polls. That’s what you’re missing. Every one of these people believes the polls — and the polls, if you haven’t noticed, have Biden winning in a landslide, and the landslide is growing every day, and he’s winning every battleground state.

And the polls for the most part are still close and many within the margin of error. So I don’t… But it’s clear to me that the vast majority of people who think this is over, truly believe the polls. I don’t, and I never have — and I’ve been bitten by it, and I’ve been validated. Both have happened. But I’m still stunned, and maybe I shouldn’t be.

But I literally am stunned by the number of people who blog, who are journalists or who just opine — the number of writers — to whom the polls are gospel. The first guy I ran into that exhibited this trait was Tim Russert. I remember having dinner one night with Tim Russert and his wife, Maureen Orth, and it’s one year after a presidential election.

What year was it? It was one year after a presidential election. So it might have been 1994. The Clinton year was ’92 for the campaign. His first year in my office was ’93. At dinner, Tim Russert was citing for me the polls of the ’96 presidential race, in 1994. He was so invested in what the polls said that that was his frame of reference.

His total frame of reference… This is not a criticism; don’t anybody misunderstand. I said, “The polls today matter? This is 1994, Tim. You think they really matter as to what’s gonna happen in 1996?” “Well, yeah. I mean, it’s an indication of what’s happening right now, who’s popular now, who’s got a leg up on everybody.”

I said, “I just don’t see it.” But that’s who these people all are, and they firmly believe that this whole thing is over. I mentioned in the last half hour, there’s a Gallup poll out, and it pretty much… It’s really contradictory, though, because it’s got the usual stuff about Biden winning big, expanding margins in battleground states.

But then if you keep plodding away and you keep reading toward the end of the poll, you find a fascinating part of it: “At 46%, Trump’s Pre-Debate Job Approval Highest Since May — In Gallup polling conducted over the two weeks leading up to the first presidential debate, President Donald Trump’s job approval rating is 46%, its highest point since May. … 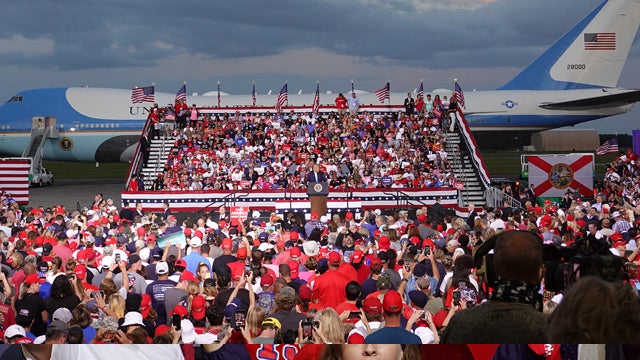 “Trump started the year with the highest approval rating of his presidency (49%),” that’d be January, “amid his acquittal on impeachment charges, but it subsequently descended to the 38% to 42% range during the summer as the coronavirus pandemic, the resulting economic downturn, and racial injustice issues afflicted the nation.

“Although the increase of four percentage points in Trump’s latest rating is not statistically significant,” the fact that he is up from 38 to 42 to 46% two weeks before the debate? That’s big. But there’s one more part of this. One more part that nobody’s reporting on. It’s a single little question. “Regardless of whom you support, and trying to be as objective as possible, who do you think will win the election in November?

“A majority believe that Trump is gonna win, 56 to 40%.” This is among people Gallup has polled. Question again: “Regardless of whom you support and trying to be as objective as possible, who do you think will win the election in November?” Donald Trump 56%, Biden 40%. Republicans answered the question: Trump 90%; Biden 9%. Independents: 56% Trump, 39% Biden. Democrats” 24% Trump, 73% Biden.

Now, what would explain this? This answer doesn’t jibe with any other poll result that’s out there, and I don’t care what. Even the Rasmussen. Let’s even include them. All of the polls no matter where you look at them, every poll, Nate Silver will tell you: Biden wins in a landslide of eight points, 10 points. And it’s getting worse for Trump as time goes on, and Trump really destroyed himself in the debate.

It’s really bad after the debate. Then you go to the battleground states, and it’s looking even worse for Trump. And yet in just such a poll, where Biden wins big — and that just doesn’t make sense to me. Biden doesn’t have the kind of enthusiasm behind him, the kind of raw support that would generate a win like that. But they’re sticking with it.

Now we have Gallup reporting that the people participating in their poll think Trump’s gonna win 56 to 40%. Why is this? Could it be that these people say, “Well, he won in 2016 when nobody thought he was gonna win. Same thing’s gonna happen in 2020.” I don’t know. You tell me. But this, for some reason — and I can’t put my finger on it. This one fascinates me.

Because these are the people in the poll that are producing the results that suggest Biden’s gonna win in a landslide. They like Biden, they say; they don’t like Trump. But then when you ask ’em, “Well, who’s gonna win?” by 56 to 40, they think Trump.

RUSH: By the way, one other thing about this Gallup poll, where they asked people in the poll who had think is going to win: It’s never been wrong. It has never been wrong. They started this poll in 1996. So it doesn’t go back all that far. This is a little under 30 years, but it has never been wrong. “Looking back, Gallup has asked Americans for their predictions in the late summer or fall of every election, ’96 through 2012. 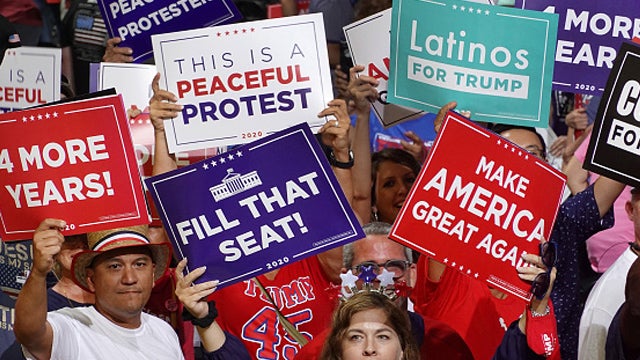 Well, I, ladies and gentlemen, have been analyzing this. I’m not just asking the question rhetorically. There has to be a reason. The same people in this Gallup poll that report Biden up by eight… Well, they answer questions that produce the result of Biden winning big, landslide here, landslide in the battleground states, whatever.

The same people, when Gallup asks them: Who do you think’s gonna win, “being as objective as you can,” 56 to 40, they say Trump’s gonna win.

We’re talking about a representative sampling of people who believe this. So if polling methods and science are to mean anything, we have to give it great credence (ahem, ahem, ahem), and it ought to cut through any of the concerns about these “shy Trump voters.” There are a lot of people out there who are relying on that fact. 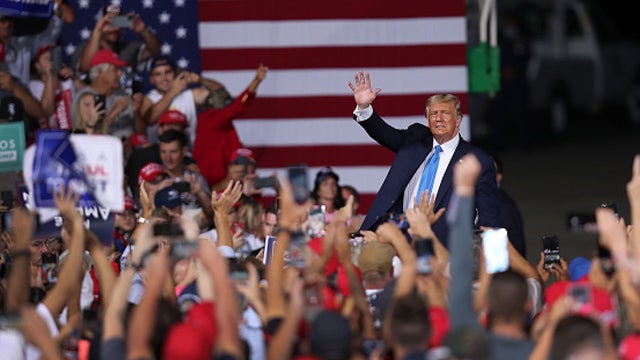 This 56 to 40 is not close, and I’m just telling you: For these people in this poll to think by 56 to 40 Trump’s gonna win, they have to have some feedback producing that opinion, and I think the feedback is that they know a lot of people who are voting for Trump. They hear it. These people can say Trump will win in this poll without revealing themselves to boot.

So there’s no danger to them in saying they think Trump will win, because they’re doing it anonymously. Gallup is not attaching names to their respondents. But it hasn’t been wrong since they started this in 1996. Now, there may be other reasons, too, why this result exists. But this is not, I don’t believe… I don’t believe this is an insignificant part of a Gallup poll.

RUSH: Investor’s Business Daily: “Biden Lead Over Trump Cut to 3 Points After Presidential Debate,” according to their own poll. “Joe Biden’s lead over President Donald Trump has narrowed to 2.6 points among likely voters, a new IBD/TIPP 2020 election poll finds. Trump’s rise comes despite registered voters seeing Biden as the winner of Tuesday’s debate and coming across as more likable by double-digit margins.

“The new IBD/TIPP Poll was conducted after the Trump-Biden presidential debate on Tuesday night but before the early Friday [news] that President Trump has tested positive for the coronavirus.” So in this “poll Biden leads President Trump, 48.6% to 45.9%. …

[It] reflects an online survey of 1,221 registered voters, including 1,021 likely voters, from Sept. 30-Oct. 1.” So even though, even though Biden was “seen as more likable by double digits, 54%-34%, Trump is narrowing the gap. He narrowing the gap between himself and Biden, which is exactly what started to happen in 2016 as the polling companies all began to take stock of their reputations.