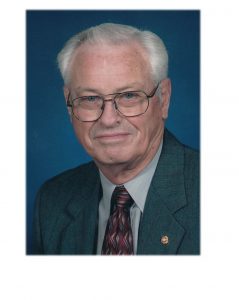 He was born the son of the late Ira Spence and Rhilda Wood Spence, on October 31, 1924 in the Dry Creek Community and died April 13, 2019 in West Plains, Missouri.

He was preceded in death by his parents; both wives; three brothers, Willowby, Clement, and Vernon Spence.

He was a member of the First General Baptist Church in West Plains. He was employed with the Ford Dealership in West Plains for twenty years, and also with McKesson Corporation as a sales repesentative for twenty years. He loved to hunt, fish, golf,  do woodworking and make fiddles. His passion was spending time with family and singing and playing guitar with the Sunny Side Up bluegrass band.

Mr. Spence was a veteran of WWII serving in the United States Army.  He joined the elite 10th Mountain Division, the first alpine fighting unit in the United States Armed Forces. The 10th was sent to Italy when the U.S. Army identified that it needed a specialized winter-warfare force to fight in some of the roughest terrain and arctic conditions in the North Apennines Mountains in Italy. The alpine unit played a major role in the battle for Italy and broke the Nazi’s last line of defense, quickening the end of the war in the European Theatre. He was awarded three bronze stars during his service.

Memorial contributions may be made to the National Kidney Foundation, American Heart Association, or the West Plains Honor Guard and can be left at the funeral home.

Burial will be in Howell Memorial Park Cemetery under the direction of Carter Funeral Home, Inc., West Plains. Military Rites will be conducted by the West Plains Honor Guard and Army personnel.