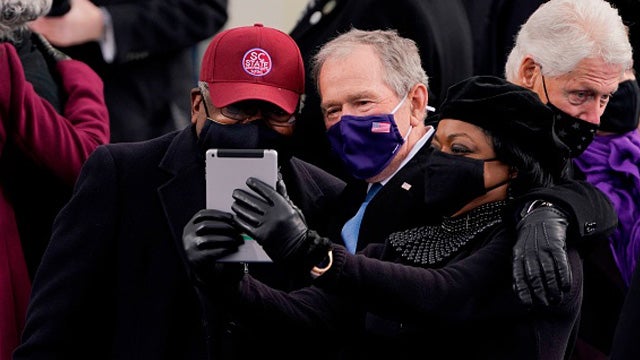 CALLER: I just wanted to comment quickly — maybe you could speak on it — about the Politico article that was just recently written where George Bush was quoted as saying to Representative Clyburn that he was the “savior” of the country from this past election, and it kind of got me annoyed. And I’ve actually never called a talk show (chuckles), and I decided to call your show because I was really upset at that comment. You know, unfortunately, President Bush is coming off as a useful idiot right now.

RUSH: Well, let me explain this to people who may not be aware of this. It’s gonna be very few, but yesterday at the inauguration, George W. Bush approached James Clyburn — who named his daughter after a steak, Mignon Clyburn. I just throw that in as an added bit of information. Anyway, he went up to Clyburn — and Clyburn is the source for the story.

He said that George Bush called him “the savior,” and the reason is it was Clyburn’s endorsement of Biden in South Carolina in the primaries that is seen by the cognoscenti, the establishment — that endorsement of Clyburn’s is what put Joe Biden over the top because it got the black vote to turn out. They had been sitting it out, they had been dormant.

They came out for Biden because of their respect for Clyburn, and Bush went up to Clyburn to thank him for doing that. He was really basically saying, “Congressman Clyburn, you’re the reason that we got rid of Trump. You’re the reason we’ve got Biden in there. Thank you. You are the savior.” Clyburn is the source of this. Thank you, Christian. We’ll have commentary coming back.

RUSH: Now, one of the things that Christian, our previous caller, was upset about is during the eight years of the George W. Bush administration, they never defended themselves. Bush didn’t. Karl Rove didn’t. Nobody did — and they were routinely attacked. And the thing about it was that it was an attack on us, too, just like these never-ending attacks on Trump were attacks on the people that voted for Trump.

In fact, I would suggest that the real enemy that the media/the Democrats had was the people that voted for Trump. Trump was just one guy and even if he had served his second term, he’s still gonna be out the door someday. But Trump voters could be voters in perpetuity. And that was the real focus of their anger and their hatred was the voters that supported Trump. 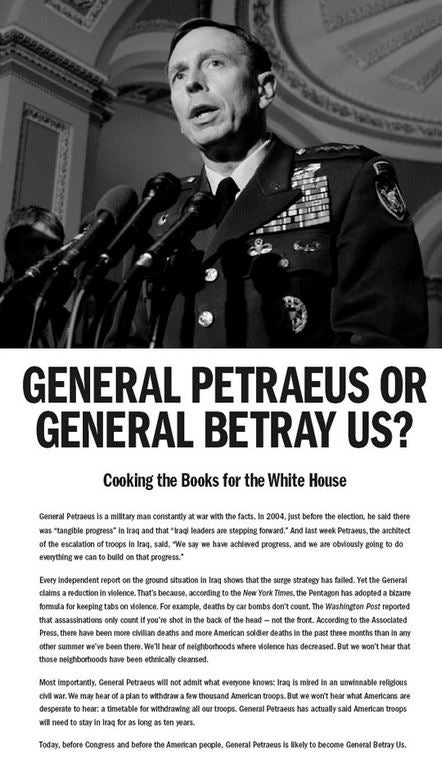 Well, during the eight years of Bush, he was savaged like Trump was — and, in some cases, it was parallel. They compared him to Hitler. There were movies that justified the assassination of George W. Bush. It was dirty. It was mean. It was evil stuff. They had General Petraeus up to testify about some action that he was suggesting we take in Iraq to turn the tide there.

And on the day of his testimony before congressional committees, they ran ads referring to him as General “Betray Us,” accusing him of lying before he had even testified. And it was all an effort to sabotage and undermine the Bush war in Iraq and the Bush War on Terror. And despite it all, Bush never defended himself, and neither did anybody in the administration.

We did! People… Conservative talk radio all over the country defended Bush, defended his administration, defended his objectives, and Christian was a little upset here about Bush’s loyalties here to the people that were ripping him apart. James Clyburn was out there ripping Bush apart, like every other Democrat did, for eight years, from 2001 to 2009.

I’ll never forget — and I commented on this when I saw it — there was a State of the Union speech. Bush had given it, and he was mistreated during this speech like you can’t believe. He was booed. The Democrats did not stand up for standing O’s. They made it abundantly clear they thought he was an idiot; they had no respect for him whatsoever. And I watched it all the way through.

At the end of that speech, cameras cut to the foyer outside the House Chamber where the State of the Union speech was delivered. And a senator from I think it was Minnesota (I wish I could remember who it was; you might remember, Snerdley) was begging Bush for a photo. He ran after him and wanted Bush to pose with him for a photo, and Bush did.

The senator is no longer there. I don’t know who it was. I wish I could remember who it was. Prominent. It was a prominent senator, and I said, “What the hell is this?” So when he doesn’t think the cameras are on, he’s out there and he’s with “the president of the United States,” and he wants a picture to memorialize it. And Bush happily, dutifully stopped what he was doing and posed for the photo.

I’m sitting there watching it. I’m saying, “These guys are trying to destroy you,” and I would even mention that to Bush when I had occasion to talk to him. He said, “No, no, Rush. It’s just politics. It’s all it is, is just politics. I am not going to take the office of the presidency down to the gutter of everyday politics. I’m gonna stay above it,” and that’s why they wouldn’t defend themselves.

But we did, and I think Christian was upset that Bush chose to praise somebody that tried to destroy him, James Clyburn. Here’s Clyburn, by the way, telling the story. This is yesterday after the inauguration. Clyburn held a conference call with reporters, and the question was, “What were you thinking when President Biden was taking his oath was office?”

CLYBURN: George Bush said to me today, he said, “You know, you [are] the savior, because if you had not nominated Joe Biden, we would not be having this transfer of power today.” He said to me, “Joe Biden was the only one who could have defeated the incumbent president.”

RUSH: (summarized) “Joe Biden was the only one who could have defeated Donald Trump, and you made it happen,” President Bush told him. “You made it happen.” Clyburn says Bush told him he made it happen, and he did. I’ll never forget it. Clyburn went through the motions of two days supposedly rubbing his hands together in angst over, “What do I do? 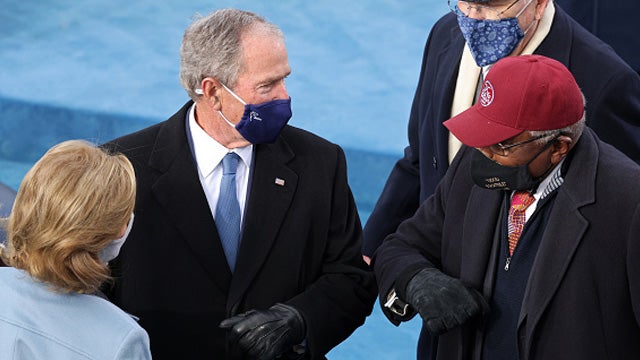 “What do I do? What do I do?” Because Biden doesn’t have the greatest record on race in Washington, folks. He’s sidled up to all kinds of racists and bigots in the Democrat Party over the course of his time there. But eventually, Clyburn bit the bullet. He went out there and endorsed Biden.

And that signaled to African-Americans in South Carolina, “It’s great and safe to vote for this guy,” which they did. And from that day forward, it changed Biden’s fortunes, and he never lost a primary (or one that mattered) after that. So that’s why Bush sought to praise him. So, Christian, I’m glad you called. I thank you.

RUSH: By the way, we have a new sound bite from James Clyburn, who was also one of the leaders of the Congressional Black Caucasians. You know, the House of Representatives has that group. It’s an offset. The Congressional Black Caucasians. He was a president of that group. It rotates. So, anyway, he was on a Balance of Power show, Bloomberg TV, hosted by David Weston. David Weston is the former president of ABC News.

Executives don’t he want to be behind camera, but this guy is. Executives don’t want buy guy changes to be talent, but this guy apparently does. David Weston. So he has as his guest James Clyburn the Congressional Black Caucasians. Question: “There was apparently a moment of bipartisanship yesterday between you and the former president, George W. Bush, when he said that you were the savior. What did you take him to mean by that?”

CLYBURN: George W. Bush and I are pretty friendly. When he was president, we joshed around a lot, and I saw the group that I saw yesterday, because he had a very colorful comment to make four years ago at the inaugural speech. And so when we greeted each our with our elbow bumps, I looked at him. I said, “Hopefully we don’t have a strange speech here today,” though he said it in more colorful language four years ago. That started the conversation, and then he turned to me. He said, “You do know that you were the savior?” (bouncy music) and he was talking about the primary. 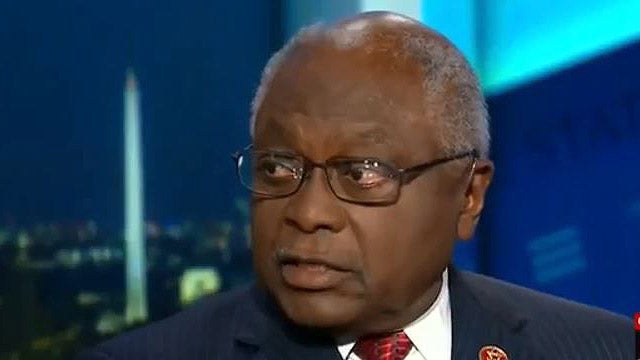 (interruption) What did he say? (interruption) You don’t remember what he said. (interruption) There’s no problem if you don’t. But since Clyburn referred to it, I want to tell you what he said. I can’t use the language. Clyburn’s right. It was kind of salty. But I can get close. After it was over, after Trump had finished his speech…

I don’t know if Bush was asked what he thought or if he just volunteered it on his way off the stage. But he said, quote, “Well, that was some weird [crap],” but he didn’t say “crap,” and if you remember the Trump inaugural speech, he took it to everybody on that stage, because everybody on that stage… There were people… Like Bush showed up. It’s tradition. Any past president can show up. They’re auto-invited. So he showed up.

It’s like if you’ve won the Masters. You go every year, you’re an eternal champion, you go every year until you retire. And this is the same. Jimmy Carter couldn’t be there this year for health reasons. So when Trump gave his inaugural address, Obama was there, Bush was there. There were a lot who boycotted it too. But there were enough Washington establishment people there that Trump’s speech could be easily said and categorized as a direct attack on them.

I remember commenting on it. He called them out. It couldn’t to be their face because he was seated in front of them and they were behind him. But it was fearless. He accused them of being the stupid leaders that had given us rotten trade deals, that had permitted wanton illegal immigration. He just took it right to ’em. And when it was over, George W. Bush said, “Well, that was some weird [crap].” Almost as though it was the first time Bush had heard Trump say those things.