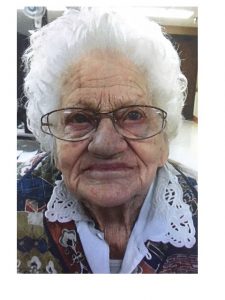 She was preceded in death by both husbands; two brothers, Shorty and Earl; two sisters, Nadine and Ruby; two sons Boyd and Dean, and one grandson Lonnie.

Glessner was a homemaker who loved taking care of her flowers, square dancing, jig dancing, and two stepping. She was saved and baptized when she was a teenager. She will be greatly missed by her family and her Brookhaven Healthcare family.

Funeral services for Glessner Hodges will be Thursday, July 11, 2019 at 2:00 p.m. at Carter Funeral Home Chapel, West Plains with Brother Todd Williams officiating, with visitation at 1:00 p.m. until time of service.

Burial will be in Union Hill Cemetery, Howell County, Missouri, under the direction of Carter Funeral Home, Inc., West Plains.