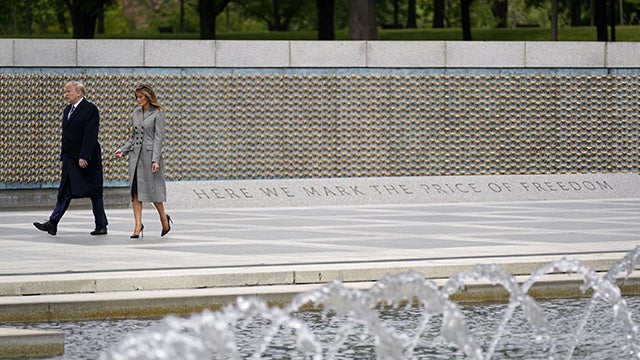 RUSH: Today, ladies and gentlemen, is the 75th anniversary of Victory in Europe Day. That is the end of World War II in Europe. It signifies the defeat of Germany 75 years ago. That was only six years before I was born. President Trump and Melania went to the World War II Memorial today, and there’s something there that just made…

I found myself watching this and stopping — watching it at rapt attention, almost at attention — ’cause I had not seen this before. It is a memorial that has thousands of gold stars. And the president and Melania were standing in front of this. It’s huge. I’m sure some of you have been to Washington and have seen it — and the text, the words on the memorial, really got me. 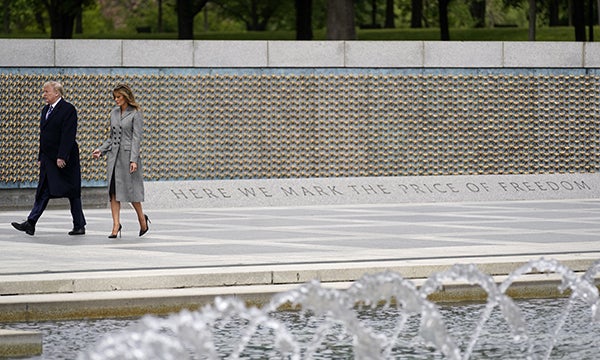 It was the people who died, 18 to 23 years old for the most part. Some, of course, older than that. I sat there remembering. I’ve been to the D-Day beaches and Pointe du Hoc, and I’ve been to the American cemetery there. It’s hallowed ground. It just got me to thinking of all of the people who’ve made so many sacrifices.

Six, seven words if you count the preposition. Really powerful.

It’s exactly right. To so many people, World War II, Germany and Japan? It’s ancient history to a lot of people. You start thinking about what would happen if we had not prevailed, if we had not won. But of course, we did, and it’s a testament to the American resolve, American commitment, American perseverance and American courage.

I just wanted to make mention of it because it’s probably… It’s like Pearl Harbor Day every year; it happened so long ago that it’s only a day of note to people of a certain age. Now I am a person of that certain age. As I was saying, V-E Day was five/six years before I was born. So it’s pretty much right about the time I was born.

I just wanted to acknowledge it for those of you who had families, lost people in World War II — or maybe you’re still a World War II survivor, still alive. People still think about you and still have great gratitude for what you did. And I got to thinking about 20.5 million jobs lost in April. I think about this virus and the shutdowns that are being advocated and encouraged by people.

Then Chuck Schumer…You know, folks, if you doubt what I’m saying today that the forces arrayed against Trump on this Russia scandal are the same people that are behind this effort to destroy the U.S. economy, because it’s all about destroying Trump, I want you to listen to this tweet from Chuck Schumer.

Chuck Schumer is the leader of the Democrats in the Senate. Wait a minute. Where…? What happened to it? I had it right in front of me. Well, I’m gonna have to find this because I just am up against it on time. It’s a sickening thing.

That’s the leader of the Democrats after the case against Flynn was dropped. If you doubt that this is not a continuation of a get-Trump move for the past three years, readjust your thinking.