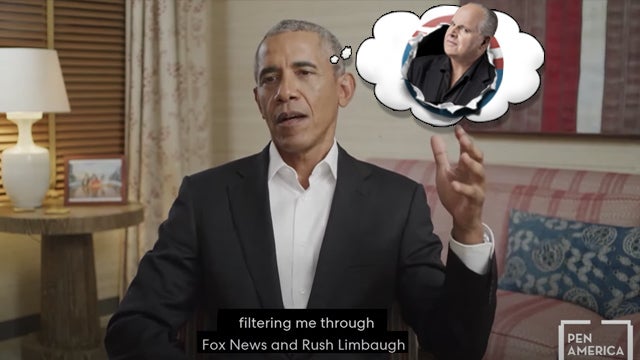 RUSH: I continue to live rent-free in the sizable skull of Barack Hussein Obama. Tuesday was the PEN America virtual gala. PEN. It’s a literary group. And Obama was there. He received the Voice of Influence Award. And during the Q&A, the presenter of the award, historian Ron Chernow, says, “I’m wondering how much of this unusual versatility that you’ve had as a politician, being able to speak to different groups, how much of it stemmed from your unique biracial identity and the fact that you were a product of two very dissimilar families?”

OBAMA: I ended up getting enormous support in these pretty conservative, rural, largely white communities when I was a senator, and that success was repeated when I ran for president in the first race in Iowa. By my second year in office, I’m not sure if I could make that same connection because now those same people are filtering me through Fox News and Rush Limbaugh and an entire conservative media infrastructure that was characterizing me in a way that suggested that I looked down on those folks or I had nothing in common with them.

The only conservatives he wanted to have a connection were the David Brooks types, who he once had dinner with, and David Brooks said, “Man, did you see the crease in that guy’s slacks? This guy’s gonna be a great president.” I think they had dinner at George Will’s house. And they were all just happy as they could be ’cause they’re all intellectuals, they’re all from the faculty lounge. They’re all from the establishment. And they’re all looking forward to a wonderful president. We just got rid of that hayseed cowboy, George W. Bush, and now we’re gonna get a real intellectual in there. That’s right. We’re gonna get a real intellectual in there, and we’re gonna get somebody that’s gonna really turn this country around.

And, of course, we all know what happened. The economy came to a screeching halt. It was bad news. Obamacare was a flawed rollout. But he is the one who defined bitter clinger. He is the one who characterized them. He’s the guy who made it known that he had no love lost or respect for any of those people, rural Americans who are conservatives. And now to try to pass this off on me or Fox News.