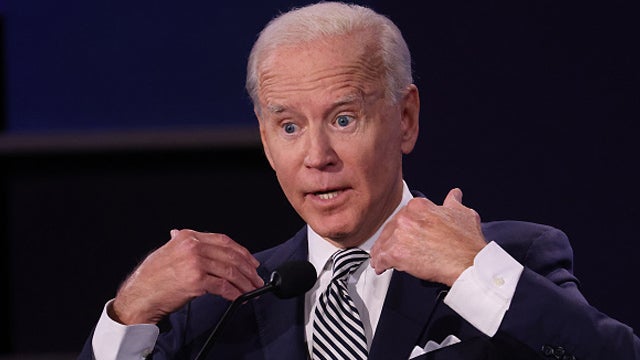 But when the train pulled into Alliance, Ohio (it’s a little whistle-stop tour), Biden got off the thing, and he drew some white circles on the ground and had reporters stand in ’em and then took questions. A reporter said, “Is there any scenario where you would not debate the president in the next two debates? Are there any changes you want to see made by the commission before you debate again?”

BIDEN: Well, you know, he not only attacked, uh, me constantly and my family, but, uh, he attacked the moderator. (snickers) I just hope there’s a way in which the debate commission, uh, can control the ability of us to answer the question without interruption. Um, I’m not gonna speculate on what happens in a second or third debate. My hope is that they’re able to, uh, um, literally, uh, say, “The question gets asked of Trump, he — he has a microphone, he has two minutes to answer the question, no one else has a microphone.” 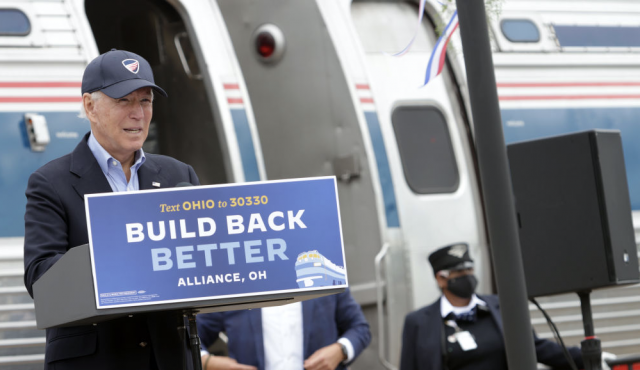 RUSH: Oh, so Biden wants microphones to be cut off as a condition for doing the next two debates so there can’t be any interruptions. Let me tell you: Even if the microphones were cut off, it wouldn’t stop Trump if you’re gonna sit there and tell lies about him — and, by the way, it didn’t stop you, either. I mean, you weren’t exactly Mr. Deference to the Rules last night, Plugs.

You were doing everything you could to interrupt, which is the nature of these things. Everybody should know that going in. To try to control these things and to… You know, it’s a debate, not a freaking press conference. Press conferences feature questions. We’re not doing Meet the Press. These are debates. It says “debates,” and every time a debate broke out, the thing was brought to a screeching halt.

It’s just frustrating. Now, CNN. Chris Cillizza has pointed out President Trump — he said this before the debate last night — will come into tonight’s debate on a major losing streak. He still has not won a single general election debate for president. Now, this is Chris Cillizza, it’s CNN, so he thinks that Trump lost every debate with Hillary Clinton.

He cites polling data from the Roper Center for Public Opinion Research. He said the best Trump did in 2016 was in the second debate when 32% of the people said that he won, according to a Washington Post/ABC poll. The worst debate for Trump, according to the polls, was the first one where only 24% of the people said that he had won in a CNN poll. So Chris Cillizza was warning CNN viewers:

The expectation is that the next two debates will not happen, and among the expectation/reasons why is that the Biden people are gonna say, “This is… This is… We’re not going through this again!” That it will not be the Trump people. James Carville has said on PMSNBC that Joe Biden — I think he said yesterday — “should think long and hard whether they want to put the country through this again.” 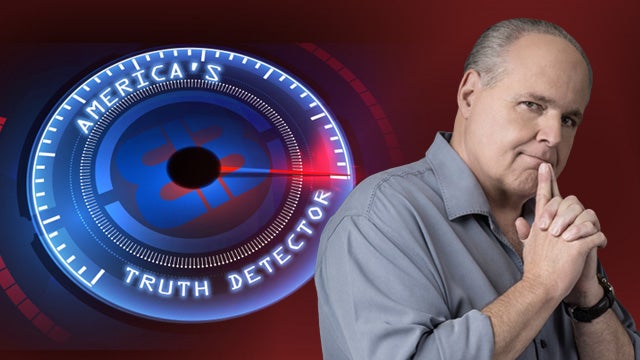 “This accomplished nothing for Trump. I think Biden did fine, but it was not a very good night for American democracy at all, I don’t think. It was tough to watch.” Yeah. Okay. So for everybody out there thinking that Biden won this thing, everybody on his side is suggesting we not do this again. Why would that be? Let’s be honest.

He was so rude, he was so mean, he was so ignorant of the rules, he was just — just — just a horrible orange guy. Consensus is that Trump blew this sky-high. The consensus is that Trump embarrassed himself and his supporters. That’s what they all think. Now, given that, why wouldn’t they want another debate? Particularly when they’re also saying that Plugs did great. Plugs withstood the 90 minutes.

RUSH: Five times Joe Biden disrespected Bernie Sanders and the radical left during the debate last night. That may be one of the reasons why so many leftists in the media, Democrat Party, are talking about why they don’t want any more debates