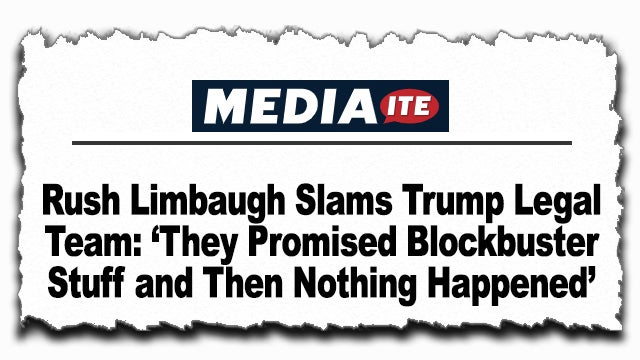 CHRISTIE: Yes, and — and here’s the reason why. The conduct of the president’s legal team has been a national embarrassment. Sidney Powell accusing Governor Brian Kemp of a crime on television, yet being unwilling to go on TV and defend and lay out the evidence that she supposedly has. 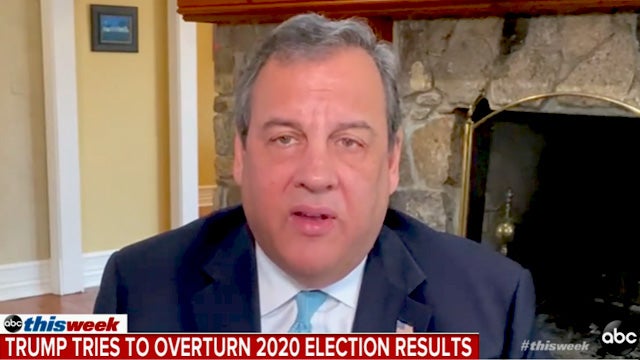 This is outrageous conduct by any lawyer. They allege fraud outside the courtroom, but when they go inside the courtroom, they don’t plead fraud and they don’t argue fraud. The evidence has not been presented. And you must conclude, as Tucker Carlson even concluded the other night, that if you’re unwilling to come forward and present the evidence, it must mean the evidence doesn’t exist.

RUSH: That’s Governor Christie. Now, I need to share with you that Mediaite, which has no love lost for me or this program, has already run a story, the headline of which is: “Rush Limbaugh Slams Trump Legal Team: ‘They Promised Blockbuster Stuff and Then Nothing Happened.’”

And they get it right in the sense that this was said by me in the context of the Sidney Powell story. And the only point that I made, folks, just if you run into this and you think that I’m in the process of doing a Governor Christie on the Trump team, I’m not. The point that I made was about that press conference specifically. And I shared with you that I had a number of friends who had written me echoing a thought that I had.

If you’re gonna promise blockbusters like this. I had one friend tell me he was giddy during that press conference, the whole hour when Rudy started, then Jenna Ellis and then when Sidney went, he thought that what was going to follow was evidence, some hacker that they had found or somebody they had found that had the evidence of what they were talking about. He said to me that when you do a blockbuster press conference like that, when you are telling people that you’ve got blockbuster, fire hose type of evidence — I was expecting to hear some. And I didn’t. And I shared those thoughts with people.

And Mediaite has typed it up here as though I personally am slamming the Trump legal team. You might want to interpret it that way. Maybe you can. But I was watching it expecting something big to come out of it. But I’m still waiting. That’s the difference. I have not given up that there isn’t something. The more you look into what happened, when you look at the way Horowitz, as I just shared with you, frames what happened here, I mean, you would have to work really hard to believe there wasn’t any fraud here.

And then when you look at the usual suspects who are doing everything they can to make fun of the notion that there was fraud, trying to downplay it and trying to tell people you’re silly. There couldn’t have been fraud. They couldn’t have done this, that’s the wrong attitude to have about this. We need to get to the bottom of what happened, and if it was not fraud, then that’s all the better. But we can’t have this much, this many allegations and this much circumstantial evidence of which there is a lot.

We’ve got to find out what happened. We cannot conduct elections this way. It’s like, folks, we really need to get back to the concept of Election Day, where you had absentees and people who showed up to vote on Election Day, then you tune at night and you watch who won. We used to be able to do that easily. We vote, we count, we announce. Now they tell us, “No, no, no, no, no. We’re not gonna know the results on election night.” Why the hell not?

“Well, because we’re not sure what we’re gonna need to elect Democrats until well into election night.” That’s what they’re telling us. We used to be able to have this concept of Election Day, and we better hightail it back to it. “But, Rush, but, Rush, people are too mobile now, and there are too many vagaries and people need the flexibility.” No. We used to be able to. This is too crucial. The more ways you give people to vote, the more ways you’re gonna give people to blow it up and cheat on it.