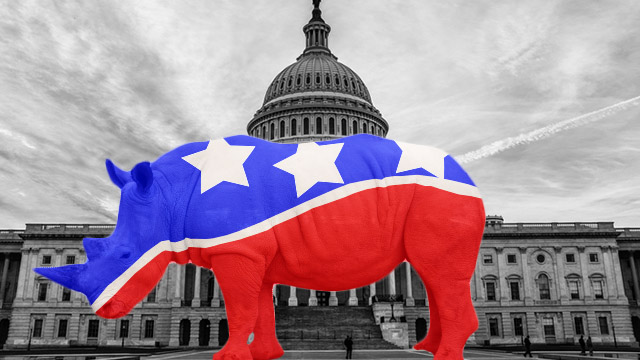 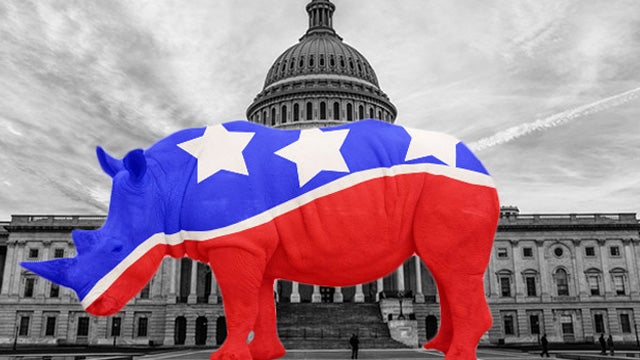 RUSH: Let’s move on to the Gerson column because I told a caller in the first hour that — she said that she really, after having had Trump as president for two years, she really is glad that Romney and McCain lost. And Trump winning has enforced for her why it was a good thing. 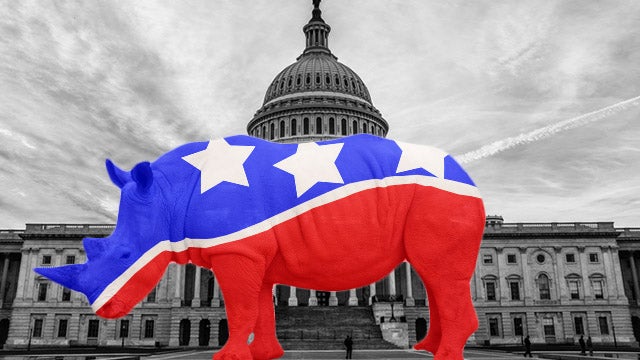 Now, here’s Gerson’s piece. And it’s right along the lines here in a way with Peggy Noonan. The headline: “Why Should a Republican Stay in a Party That Has Gone Off the Moral Rails?” It is published at Real Clear Politics. Now, Gerson used to be a columnist for the Washington Post. I don’t know if he still is. But let’s just look at this premise.

You just read that headline, and if you have paid any attention to what’s going on in the country the past two years or longer, it could literally make your blood boil. “Why Should a Republican Stay in a Party That Has Gone Off the Moral Rails?” It opens this way.

“A former Republican officeholder — who was highly effective at his job — recently asked me whether returning to politics in the current atmosphere was worth the effort. Would being a GOP legislator in the Trump era involve too many sacrifices of principle? Does federal office even matter as much as it used to? Wouldn’t writing books or running a charity be a better use of time and talent?”

Gerson was Bush’s speechwriter, Bush 43. And he said some Republican came up to him, “What should I do? I mean, we hate Trump. Should we go into office now or not?”

And Gerson says, “I understand the reluctance. Being a public official in 2019 not only requires constant fundraising and family sacrifice, it also involves the possibility of being captured by smartphone camera at nearly every public moment … And it is not possible in much of the country for a Republican to run and win as an anti-Trump candidate. Even Mitt Romney had to pull back from his criticisms of President Trump to win a Senate seat.”

“These concerns are a concentrated version of a dilemma faced by many citizens. Is politics too damaged to justify our continued engagement as donors, activists and voters? Wouldn’t it be more effective and satisfying to improve the community in nonpolitical ways — giving to a soup kitchen instead of a politician, volunteering at a senior center instead of knocking on doors in a precinct? … I have done my part to give the center-right party in the United States an agenda and message of social justice, rooted in ideals of solidarity with the poor and suffering and a concern for the common good. That project is in ruins.”

The project to give the center-right party in America an agenda and message of social justice rooted in the ideals of the solidarity with the poor and suffering and a concern for the common good is in ruins.

“The constituency for compassionate conservatism … is less of a political party than a dinner party. The main messages of today’s GOP are demographic panic, ethnonationalist pride and a nihilistic destruction of norms, institutions and elites. So why should a Republican run for office, donate to a candidate or even stay in a party that has gone off the moral rails?” 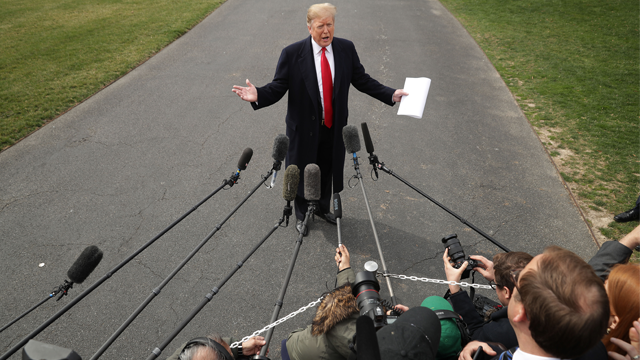 So here you have a Never Trumper RINO upset that Mitt Romney had to deny his RINO status to win in the era of Trump and now saying we can’t do social justice, we can’t be in solidarity with the poor and the suffering. We just can’t. It won’t work anymore. We can’t do that. We need to do other things.

We are being pitted every single day against people now who cheer, who give a standing ovation to killing babies after they are born! The Democrat Party in New York and in Virginia and in a host of other states does the equivalent of a standing ovation when legislation is passed allowing the killing of babies after they are born if the original intention was to abort them. Killing babies. And it’s the Republican Party that has a moral problem, Mr. Gerson?

We are up against people who call us Nazis and then scream the most anti-Jewish hate speech ever heard on the floor of the U.S. Congress, Ilhan Omar! And Mr. Gerson pays no attention, it doesn’t make any impact on him? There are people among our opponents who are working day and night to allow criminals to get into this country, criminals who rape and kill and traffic and distribute massive amounts of drugs. And we’re up against a political party who wants no limits, who do not want to help stop this.

We’re in the midst of an invasion of people who have no desire to become Americans. They are hosting and bringing the destruction of American society and culture, and somehow the Republicans are the ones with a moral problem? We’ve got people openly admitting that they are hell-bent to turn this country into another failed socialist state where there’s no food and no electricity and no future for our kids. And it’s the Republicans who are absent morals?

We have people who made up lies, Mr. Gerson, made up lies, promulgated lies, created lies just to justify endless harassing of the duly elected president of the United States, and you think the Republicans have a moral problem? We’re up against people who have purposely miseducated two generations of children for the sake of indoctrinating their failed corrupting political agenda and regularly strip free speech from students, and Republicans are the ones who have a moral problem?

And I could go on. That Gerson and people like this, these intellectual elites need to figure out where the battle really is. It’s not with the Trump branch of the GOP. The battle for this country’s future is with the Democrat Party and the American left. What is so hard to see about this?

RUSH: I’m sorry, Mr. Gerson, but don’t tell me and members in my audience, don’t tell me that we’re not moral because we won’t engage in your definition of civility and fight all of this with half our brains tied behind our backs and blindfolded.

You know, all this fake virtue signaling morality, all this fake bipartisanship, reaching across the aisle, making sure the stripes in your tie go the right way so you can be identified as a member of the elite, all this “can’t we just get along, stop tweeting, my God, we need to be polite to one another.”

How about being polite to the babies that are being born and then killed with the sanctioning of state governments? What’s the point of being polite when things like this are happening? Not to mention the invasion going on at the border, which now even your friends on the left are having to admit is a crisis. You’ve shown, Mr. Gerson, you can’t stop this on the left, and you’re not even interested in it. Stop preaching to us about the way we’re trying to stop it.

And you know what that would mean? That would mean that a real Republican would never have a chance of being elected president ever again in our lifetimes. If McCain or Romney had won, they would have granted amnesty, and that would have led to the registration as majority Democrats, how many of those 11 — and I don’t think it’s 11 — I think it’s many more millions than 11. I think if the true number of illegal immigrants in the country were ever reported, it would outrage people, and they would demand something be done to stop illegal immigration.

That’s another thing, Mr. Gerson. What is it about “illegal” that you guys do not understand? You want to sit there and call us xenophobes or racists or bigots or whatever. The rule of law is fallen by the wayside in this country! And once people begin to accept lawlessness, then they’re gonna accept it everywhere. And if we’re not gonna enforce immigration law, then it’s how long before we stop enforcing this law or that law because it’s gonna be too inconvenient or politically undesirable to enforce certain laws.

When you start down the road of accepting lawlessness and overlooking statutory law on the books, it’s not long before your entire moral fiber evaporates. And that isn’t us, Mr. Gerson. You talk about solidarity with the poor, who has shown more solidarity with the poor than Donald Trump? You may not like the way he looks, Mr. Gerson — and, by the way, Gerson is a stand-in for this entire Never Trump crowd. He’s not alone. I’m just using his name ’cause he’s got this piece today. But I’m talking to all of them.

You may not like the way Trump talks and you may not like the fact that he tweets. I suspect that what you really don’t like is how popular he is because probably tweeting is beneath civilized people. And here’s Trump leading the incivility and in horrible, horrible, ooh, it’s just so nasty, Twitter. We can’t be a part of it.

Well, who cares how he speaks, and who cares how he looks. We’ve had our fill of Ken dolls and Hollywood made-up people. We’ll accept real for a while as a change and see what we get. In the meantime, how many millions of people have come off food stamps, Mr. Gerson? Never Trumpers? I thought we used to define compassion by counting number of the people no longer needed such assistance. We have a pretty record low number of people still on food stamps, and the number is plummeting.

And it really boils down to that, folks, and I’ve told you for I don’t know how many years, they don’t see it. There is no crisis, to the Washington establishment, there’s no crisis. America’s not under threat. Come on! Not from these internal things. This is just politics. You win some, you lose some, you get along. As long as the Fed keeps printing money and we can buy houses in the Hamptons, everything’s okay.