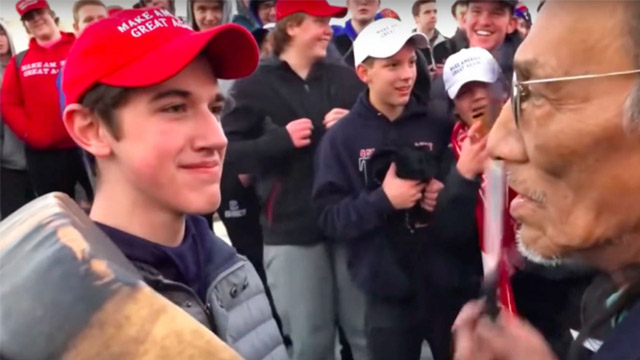 RUSH: TheHill.com, in a very bitter story. The Hill is not very happy about this at all.  “Probe Finds No Proof of ‘Racist or Offensive Statements’ by Covington Catholic Students in Viral Incident.”  Now in this story at TheHill.com, they still try to make these guys sound as bad as possible — even pointing out that they had the audacity to do the tomahawk chop right in front of the frail and elderly Vietnam vet and Injun activist, Nathan Phillips.  And they did that… They did do the tomahawk chop because they thought Nathan Phillips and his band of Indians was coming over to help ’em out.  Anyway…

“An investigation into the viral encounter between students from Covington Catholic High School and a Native American man found the students’ accounts to be largely accurate, according to findings released Wednesday. Greater Cincinnati Investigations issued a report dated February 11 that found no evidence that students from Covington Catholic made ‘offensive or racist’ statements to either Black Hebrew Israelites or Native American tribe members gathered on the National Mall.”

Now it is official.