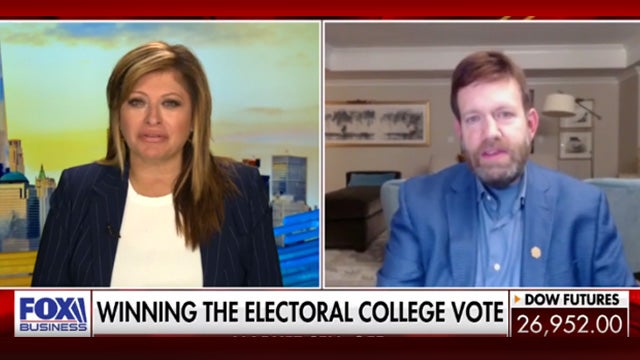 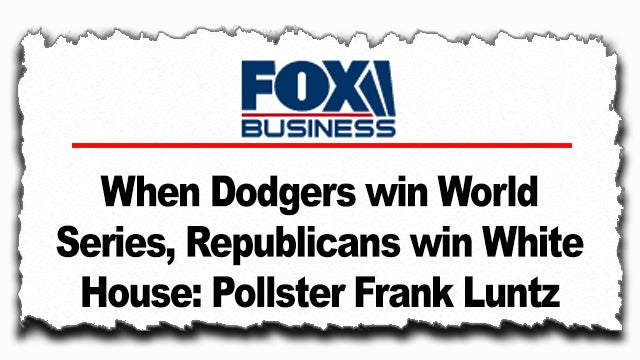 Anyway, what’s interesting about this Luntz business is that Luntz has been out there saying that Trump doesn’t have a prayer; that if his business — if his industry, the polling industry, if they get it wrong this time, again — if they blow it like they blew it in 2016, they may as well shut down. So now here comes Luntz saying when the Dodgers win the World Series, Republicans win the White House.

I have to tell you, I didn’t even know.

I knew the World Series… I knew they are gonna play it, and I knew they were gonna play it in Texas, but I didn’t know when it was on. I’m sorry to admit it, but I didn’t know. I guess you won’t know until a player tests positive for COVID; then everybody knows what’s going on. “Republican pollster Frank Luntz told Fox Business’ Maria Bartiromo [that] 81% of Trump voters think that their candidate will win.”

Now, I know that Frank Luntz doesn’t think much of Trump supporters. He doesn’t like ’em. Luntz is an inside-the-Beltway kind of guy. That’s where his business is focused. That’s who his clients are, and so this whole Trump winning, it’s kind of put a damper for some people inside the Beltway.

“Luntz said in order for Trump to be successful he ‘must win’ Florida, Ohio and North Carolina. ‘Those states are too close to call right now and every one of those states is required for a Republican to win nationwide,’ he explained. On the other hand, Luntz said Democrats are ‘looking at the three states in the industrial Midwest: Pennsylvania, Michigan, and Wisconsin.’

“Luntz said the battleground states include Nevada and Minnesota. ‘Those are the states that Republicans are eyeing very carefully because they’ve got a shot in those two states. So, in reality, this is not a nationwide election. This is a state-by-state election,’ Luntz said,” which it always is, always has been. But whatever. Look, and I’m not trying to jump in Luntz’s chili here.

The fact is the last two times I’ve seen Luntz on TV, he’s been swearing up and down that Trump doesn’t have a prayer, that the pollsters are right, that they can’t be wrong again. If they’re wrong again, it’s gonna be time to shut down the whole polling industry, that they can’t get it as wrong as bad as they did in 2016.

So now for Luntz to come along and start telling us what Trump’s road to victory is, I’m just a little confused, and here’s the bit about the Dodgers. “‘Every time the Los Angeles Dodgers have won the World Series in the last 35 years… Republicans have won the White House,’ Luntz said” to Maria Bartiromo. The Dodgers won “the World Series in Game 6 against the Tampa Bay Rays on Tuesday. ‘I don’t know if that is a correlation,’ Luntz said adding that the game was ‘quite an evening.’”